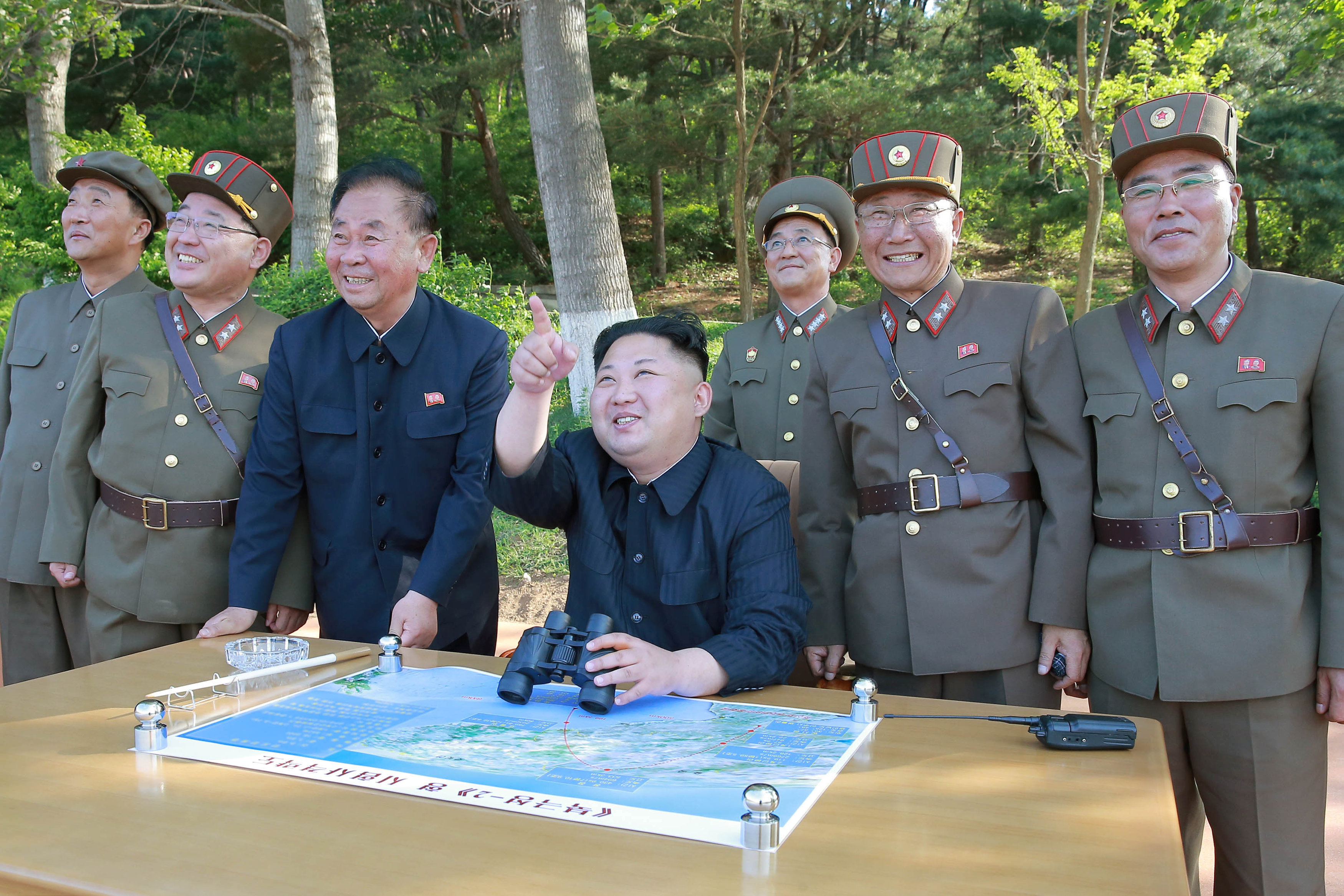 Seoul: North Korea said on Monday it had successfully tested an intermediate-range ballistic missile which met all technical requirements and could now be mass-produced, indicating advances in its ambitions to be able to hit the United States.
The North fired the missile into waters off its east coast on Sunday, its second missile test in a week, which South Korea said dashed the hopes of the South's new liberal government under President Moon Jae-in for peace between the neighbours.
North Korean leader Kim Jong Un supervised the test of the Pukguksong-2, which confirmed reliable late-stage guidance of the warhead and the functioning of a solid-fuel engine, the KCNA state news agency said.
It quoted Kim as saying the Pukguksong-2 met all the required technical specifications so should now be mass-produced and deployed to the Korean People's Army strategic battle unit.
Pyongyang has defied all calls to rein in its nuclear and missile programmes, even from China, its lone major ally, saying the weapons are needed for defence against U.S. aggression.
The U.N. Security Council is due to meet on Tuesday behind closed doors to discuss the latest test, which defies Security Council resolutions and sanctions, at the request of the United States, Japan and South Korea, diplomats said on Sunday.
The test could also alter the dynamics of Moon's plan to review a controversial deployment of the THAAD U.S. anti-missile system in the South that is angrily opposed by China, which sees its powerful radar as a threat to its security.
"Saying with pride that the missile's rate of hits is very accurate and Pukguksong-2 is a successful strategic weapon, he approved the deployment of this weapon system for action," KCNA said, quoting Kim.
The launch verified the reliability and accuracy of the solid-fuel engine's operation and stage separation and the late-stage guidance of the nuclear warhead which was recorded by a device mounted on the warhead, KCNA said.
"Viewing the images of the Earth being sent real-time from the camera mounted on the ballistic missile, Supreme leader Kim Jong Un said it feels grand to look at the Earth from the rocket we launched and the entire world looks so beautiful," KCNA said.
The use of solid fuel presents advantages for weapons because the fuel is more stable and can be transported easily in the missile's tank allowing for a launch at very short notice.
The Pukguksong-2 flew about 500 km (310 miles), reaching an altitude of 560 km, South Korea's military said.
The South's military said the test provided more "meaningful data" for the North's missile programme but whether the North mastered the re-entry technology for the warhead needs additional analysis.
The reclusive state has been working to develop a nuclear-tipped missile capable of striking the U.S. mainland and on Saturday said it had developed the capability, although Western missile experts say the claim is exaggerated.
Some experts believe it will be 2030 or later for the North to develop the technology. But KCNA said last week's missile test put Hawaii and Alaska within range.
North Korea regularly threatens to destroy the United States which it accuses of preparing for invasion. South Korea hosts 28,500 U.S. troops to counter the threat from the North, a legacy of the 1950-53 Korean War.
Experts say solid fuel engines and mobile launchers make it more difficult to detect signs of launch preparations.
"For military purposes, solid-fuelled missiles have the advantage that they have the fuel loaded in them and can be launched quickly after they are moved to a launch site," David Wright, co-director of the Global Security Programme at the U.S.-based Union of Concerned Scientists, said in a blog post.
"Building large solid missiles is difficult," he said, adding it took decades for major superpowers such as France and China to go from a medium-range missile to an intercontinental ballistic missile.
U.S. President Donald Trump has warned that a "major, major conflict" with North Korea is possible, and in a show of force, sent the Carl Vinson aircraft carrier strike group to Korean waters to conduct drills with South Korea and Japan.
U.S. Secretary of State Rex Tillerson said economic and diplomatic pressure would continue.
"We cannot absolutely tolerate the missile launch on May 21 and repeated provocative remarks and actions by North Korea," Japan's Chief Cabinet Secretary Yoshihide Suga said on Monday.
"It is important to lower North Korea’s foreign currency earnings and prevent nuclear missile related shipment and technological transfer in order to prevent North Korea’s nuclear missile development. We will fully implement our own sanctions against North Korea."
China repeated its call for all parties to exercise restraint to not let tension mount further.
On Monday, the South's Unification Ministry spokesman Lee Duk-haeng said while Seoul will respond firmly to any provocations by the North, "it would not be desirable to have ties between the South and the North severed."
Moon took office on May 10 after winning an election on a platform of a more moderate approach to the North, with which the South is still technically at war since no peace treaty was signed at the end of their 1950-1953 conflict.