Typhoon Yutu weakens as it slams ashore in northern Philippines 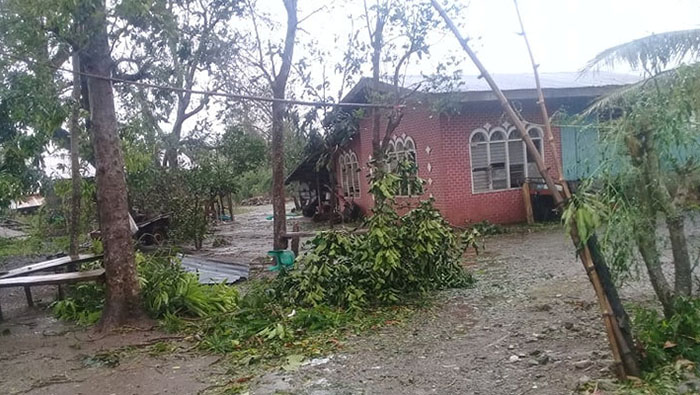 Manila: A typhoon that devastated islands in the Western Pacific slammed into the Philippines on Tuesday, bringing strong winds and a risk of floods, storm surges and landslides in some northern provinces.
Yutu, the 18th typhoon to hit the Philippines this year, swept across the main island of Luzon on Tuesday morning with wind speeds of 140 km per hour (87 mph) and gusts of up to 230 kph, and was expected to exit in the afternoon.
The typhoon, named Rosita by Philippine authorities, comes just six weeks after super typhoon Mangkhut dumped massive rains on Luzon, triggering landslides that killed more than 70 people. Thousands of people were preemptively evacuated on Monday.
There were no immediate reports of damage or casualties. Video from the path of the storm on television and on social media showed strong winds bending trees and signs, sheets of rain lashing down and loose materials flying through the air.
Lorelai Plaza Lastica, a resident of Isabela, the province in northeast Luzon where Yutu made landfall, said power was down and she could see debris scattered on roads, but no major damage.
"It was scary since it was so strong past midnight," she said by phone.
State weather agency PAGASA advised against land and sea travel in affected regions and told residents to stay indoors.
Boat services were suspended in the busy port city of Batangas. Thousands of people in some mountain, coastal and river areas moved to temporary shelters on Monday after warnings were issued for landslides and waves of up to 3 metres (9.8 feet).
Yutu has weakened substantially since the night of October 24, when as a super typhoon packing winds of at least 270 kph made a direct hit on Saipan and Tinian, two islands of the Northern Marianas, an American territory about 9,000 km (5,590 miles) west of the U.S. mainland.
It was the strongest storm to hit the archipelago in 50 years and killed a woman and wounded more than 130. Yutu tore off the roofs of buildings, flipped vehicles and damaged generators, water pipes and hundreds of electricity poles.