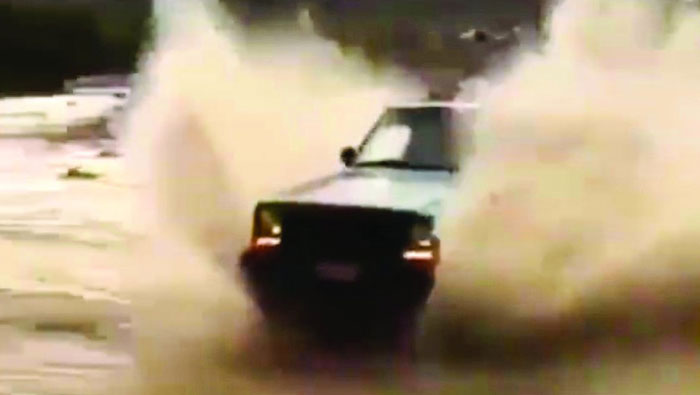 Muscat: Both citizens and residents of Oman have reacted strongly to a viral video showing a car driver drenching a cyclist in a wadi while trying to seemingly overtake him.
Read here: Calls for courtesy on Oman roads as car drenching cyclist video goes viral
“The police would like to confirm that the driver of the vehicle has been arrested, and legal proceedings have been initiated against him,” the Royal Oman Police (ROP) tweeted.
Calls have also been made by both road safety experts and the general public to launch a campaign of courtesy on Oman’s roads following the incident. Many have expressed their views on Times of Oman’s posts on Facebook as well.
“This should be a lesson to all those who think they are above the law. This kind of behaviour should not be tolerated. Thanks to the ROP for taking action accordingly,” said Suhail Al Shaibani, a citizen.
“Such arrogant drivers need to be taught a lesson of life. They need to respect others on the road, salute to the ROP,” said Dainesh Sampat, a resident.
People are calling for lessons on courtesy on roads, and perhaps making it part of the school curriculum. “Just like road safety, courtesy should be part of the training that new drivers get, no matter who you are, we all need to respect each other on the roads and everywhere else,” said Mufied M H Aljabry.
“I think it’s a moral issue and somebody’s behaviour cannot be changed in a blink of time, learning good attitude starts from home and then schools,” said Mohammed Al Tamimi.
Stephen Robson, an expat, agreed that motorists sometimes disrespect other drivers on the road by violating basic rules. “100 per cent agree, stop using slip roads to undertake queues of traffic, slow down to allow merging traffic to move into the lane, observe other road users and follow the code of the road, i.e. stop sign means stop, giving way means give way and no entry means no entry, and disabled parking spaces are for the disabled and not an excuse to park nearest to the shop entrance.”
Deepak Nariani, another resident, thinks that although a majority of the motorists in Oman are courteous towards others, few violate the rules because of a lack of knowledge. “Most drivers in Oman are courteous towards pedestrians and other drivers. However, a few drivers flout the rules due to ignorance and so do some pedestrians when they carelessly cross the road, being well aware of an approaching car. Both drivers and pedestrians need awareness of road safety, which would work in mutual interest.”
“In three years of driving experience, Omani drivers are better behaved and decent, compared with other GCC (Gulf Cooperation Council) countries. There is a lot we could learn from the drivers here. What I felt bad about is not using indicators while changing lanes. Salute to the ROP for arresting the driver who drenched that poor guy,” said Lalu T Mony, an expat in Oman.