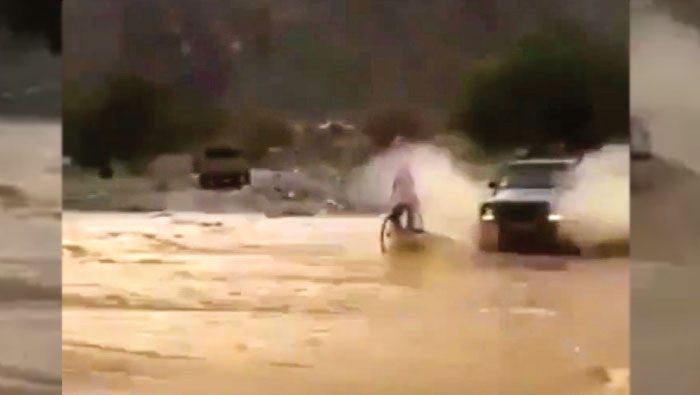 Muscat: Calls have been made to launch a campaign of courtesy on Oman’s roads after a video showing a four-wheel drive car drenching a cyclist in a wadi went viral and resulted in the motorist’s arrest.
The video, which was tweeted yesterday by the Royal Oman Police (ROP), showed the vehicle overtaking a cyclist in the flowing wadi and completely soaking the poor cyclist in the process.
On Twitter, the ROP said, “The police would like to confirm that the driver of the vehicle has been arrested, and legal proceedings have been taken against him.”

“Showing regard for rules and regulations of traffic safety on the road indicates that the driver has the etiquette and knowledge for road safety, as well as respect for the law. We should cooperate to achieve road safety, and be respectful to others,” the tweet further said.
Although the car driver was arrested, many others continue to practice similar behaviour on the road every day, said campaigners and drivers, and calls have been made to curb the practice.
Ahmad Al Harthy, Oman’s international circuit racer feels strongly about such behaviour.
“To be honest, it’s a hooligan style of behaviour. I look at this as the driver using his car as a weapon that could have resulted in the cyclist being injured, but luckily he was able to continue, but was completely splashed with water.”
Deeply rooted values
He also called on people to bring their hospitality and deeply rooted values on the roads, “That’s an issue, it’s unfortunate because the same person who might be driving the car, or stopping you from coming into their lane or tailgating you or pressurising into exiting from a lane, could be the same person, who once you go to his house will refuse to enter the house without you going in first, so why can’t we just show those customs and our hospitality which we are known for, on the road as well?”
Al Harthy said he would support a campaign targeting courtesy on the roads. “I would as a person, yes definitely. If it’s a matter of saving lives, who wouldn’t?”
“To be honest it’s something I am very passionate about, being a racing driver people think that we don’t obey the rules, but that’s exactly the opposite philosophy, the rules that we race with are very strict and very important in our racing environment. It’s unfortunate to say that driving your car on a public road is more dangerous and less respectful than being on the race track.”
“Another big problem is tailgating, leaving enough sufficient space between yourself and the driver ahead, many times it’s not about your control or your ability to drive your car, it’s usually what’s happening around you.”
“Also sometimes people avoid using indicators because others don’t respect what it really means. So if you are driving on the road the minute you indicate, the car next to you or behind you will try and avoid you from coming into the lane.”
Ali Al Barwani, the Head of the Oman Road Safety Association (ORSA) agrees and says that this is more of an ethical behaviour rather than just the usual driving etiquette.
“This is more than courtesy on the roads, it’s more of a personal behaviour, the person when he drives presents himself as
a human of course and it’s about their ethics.”
He said that religion should play a role, “We are in a Muslim country, so as well as from the Islamic point of view, I kindly request people from this religion to behave well and to respect everyone, Islam rewards Muslims to be good. For example if they see a stone on the road which might affect passers by, Islam rewards people to remove that stone and take out the risk of hurting other people, and it’s a very simple act.
“All religions ask people to act well, and in Oman we can use Islam as an example. This country has always been proud of its heritage and ethics of its people, and it’s not only Omanis but residents of Oman are also proud of our values, so this very small percentage of people who are not aligned with all these nice things, and are not acting respectful, that’s something is not nice and we are against it.”
Al Barwani supports a call for action, “I think this is happening now, and we cannot hide our heads and say it’s not there and I think if we do this (a campaign targeting courtesy on the roads) it will pay attention to the problem, and if its increasing we need to stop it.” Residents and citizens have also called for a call to action, and said that motorists need lessons in road courtesy, “Absolutely, we need to recognise and accept responsibility for the actions on the road. Driving with courtesy not only maintains safety of passengers and other road users, but can make everyone’s experiences on the road significantly better and enjoyable,” said Maria Al Ghafri
“Roads are for all- cars, trucks, pedestrians, cyclists, motorcyclists. Let’s all be courteous to everyone,” said Suresh Balakrishnan.