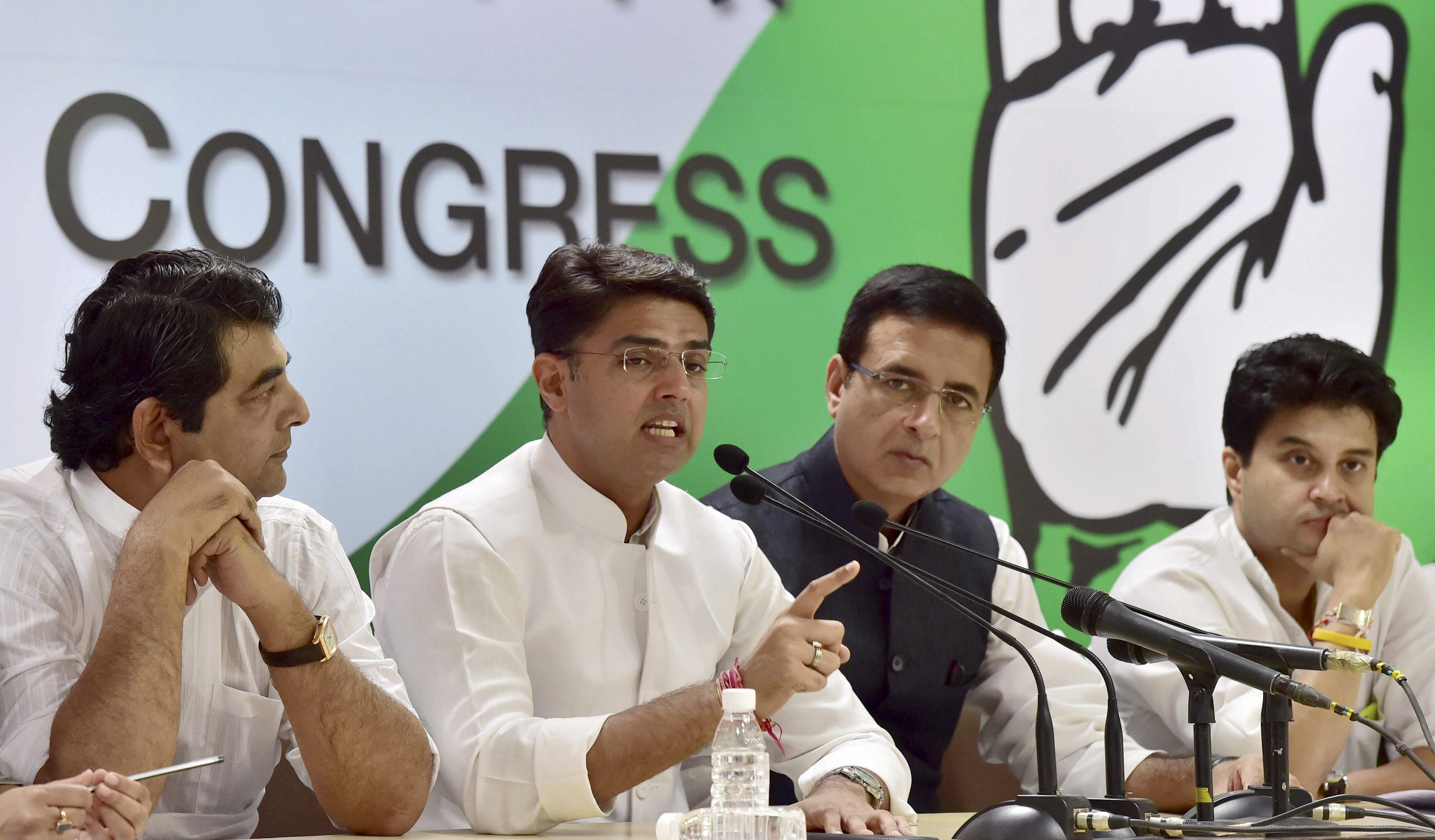 New Delhi: The Congress on Tuesday announced it will launch a nationwide public campaign with other like-minded parties in the next 24 months to "expose the failures" of the BJP-led government, which it accused of creating an "atmosphere of intolerance".
Ahead of completion of three years of the National Democratic Alliance, the Congress young brigade alleged that the government has failed on various counts including on issues like dealing with Pakistan, Kashmir policy, internal security, women safety and rising cases of rapes, atrocities on Dalits, high petrol and diesel prices, besides generation of jobs.
At a press conference here, All India Congress Committee in-charge of communications Randeep Surjewala said that the Congress will launch the extensive public campaign after bringing together all like-minded parties and those forces troubled by this government.
A power-point presentation was also made, criticising the government for "failing to bring back black money" and over the issues of Goods and Services Tax, Aadhaar, renaming of United Progressive Alliance schemes, Digital and Skill India and not addressing the problem of farm debt.
Congress leaders Jyotiraditya Scindia, Sachin Pilot, R.P.N. Singh, Sushmita Dev and Divya Spandana also alleged that cases of intolerance were rising in the country attempts were being made to change the narrative rather than focusing on resolving public problems. Scindia said when this government came to power it kindled a lot of hope by selling the dream of bringing "achhe din" in the country, but in the last three years it "shattered people's dreams".
"There is an environment of intolerance prevailing in the country. If anybody discusses it, they are termed anti-nationals. This government decides what the people should eat, learn and wear. It tries to push its policies based on a regimented 'soch vichar' (ideological approach)," he said.
Pilot said the Congress would present a better alternative model of governance before the people of the country and will expose the BJP on its "failure to fulfil the lofty promises made before coming to power". The Congress screened a video entitled Teen saal barbaad, lipapoti sarkar during the press conference. The party leaders also alleged that senior functionaries of the government were trying to help fugitives like Vijaya Mallya and Lalit Modi escape the country.
Scindia also said an "anti-Dalit" atmosphere is being created in the country. He said while on the one hand the government celebrates Ambedkar's birthday, on the other, its people harass Dalits across the country. "From my state (Madhya Pradesh), around 50 families of the Dalit community have expressed their desire to die," he said.
"Big programmes are organised for them, but it seems the prime minister wants a 'Dalit-mukt' and 'Adivasi-mukt' India," he alleged. He termed the death of Rohith Vemula and the beating of four Dalits in the name of cow protection in Gujarat's Una "stigma on our society".
Party spokesperson R.P.N. Singh said internal security was deteriorating and incidents of terrorist attacks were rising. "The BJP that gave the slogan of nationalism, does not think about it any more," he said. Sushmita Dev talked about how the Modi government has not taken care of the aspirations of the youth by not creating jobs for them despite making tall promises to that effect. "Where is their future? Modiji has dejected the youth of the country," she said.
Another Congress leader Divya Spandana spoke on the issue of women's safety and said there has been a 22.2 per cent rise in rape cases. She said of the 660 one-stop centres, only 20 have been set up and the Nirbhaya fund has not been utilised. She also accused the BJP government of neglecting South India by not supporting Karnataka and Tamil Nadu governments for drought relief and for refusing to transfer Rs15 billion that Kerala was entitled to as part of implementing MGNREGS.