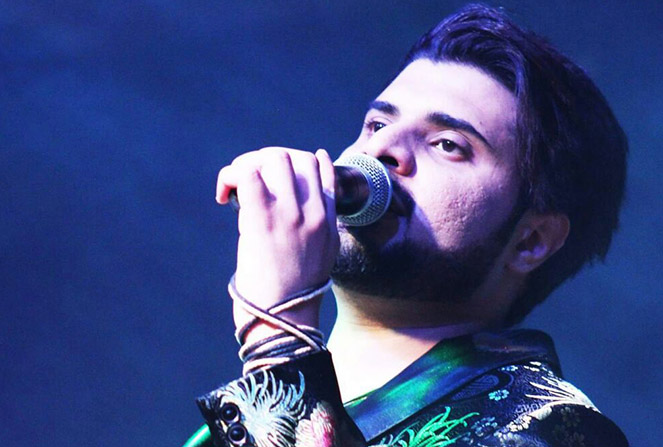 Nabeel Shaukat Ali is ready to conquer the world through his mesmerising songs. He was recently in town to participate for a music concert organised by Wings Production and Royal Events. The singer came in the limelight in 2012 when he had participated in a television show called Sur Kshetra, which had participants from both India and Pakistan and was held in Dubai.
Nabeel, who was a ‘warrior’ from the Pakistani side, and appeared shy at first, turned out to be one of the favourites after the first few episodes.

Today Nabeel is a popular singer not only in Pakistan but also beyond the borders having done concerts almost all over the world. His musical journey started since his childhood. Nabeel was born in Dubai, where his father was in the army, and upon retirement in 1990, the family moved back to their home in Lahore, Pakistan. There, he continued his education and fuelled his passion of singing. In 1997, Nabeel participated in a competition called Gaayei aur Suniye on a radio station in Pakistan.

“It was the first competition of my life and I was the winner in the child artist category. I sang Rang Aur Noor Ki Barat by Mohammed Rafi. He has always been a great inspiration for me along with other legends like Kishore Kumar, Sonu Nigam, and others,” said Nabeel.
In 2011, Nabeel participated in Azme Alishaan, a national singing competition in Pakistan, where he, needless to say, won again.

However, his biggest platform came with Sur Kshetra, a TV show which had some of the legendary singers from both India and Pakistan mentoring the participants who were selected through country-wide auditions in the two nations. Himesh Reshammiya and Atif Aslam were the direct mentors of the two respective teams of India and Pakistan.

“I was probably not going to participate in that competition, if it was not for my brother, who is also my manager now. It was he who encouraged me to go ahead. I also got a call from someone from India who said that she had seen my videos on Youtube and that I should participate in this upcoming singing competition.

“So I went for the auditions. The queue was too long and I thought nothing will happen. I came back disappointed but my elder brother forced me to go again,” Nabeel remembered.
Nabeel sang Bheege Hoote Tere at the auditions and got selected. The rest is history.
The singer won the exciting and nail biting finals, which required the finalists to sing a variety of songs to show their talent and versatility to the legendary judges — Asha Bhosle, Runa Laila, and Abida Parveen. Ghulam Ali, Ismail Darbar, Sajjad Ali, and Hadiqa Kiyani were also present.
“It was a life-changing moment for me, and from that point I started my professional career with stage shows and live recordings and I am enjoying it.”

About his singing career, he says, “Although there is money and fame, this profession is not easy. But I think God has been very kind to me. Because of my hard work I was able to win every time. I feel I am lucky and blessed,” he added.

Nabeel who was recently in Muscat said that he loved the country. “It’s my first time in Oman. People are so nice here. The locations are beautiful and mesmerising. I might come back and shoot a music video here in future,” he said.

Some of Nabeel’s recent hits are Bewajah and Kooch, both his own compositions. “I have received a good response and people are listening to my songs, and when I perform outside Pakistan, they sing along with me,” said Nabeel with a smile. Sharing his future plans, Nabeel said that he wants to work for new musical projects. “I have many plans and everything is related to music. If I get the opportunity, I will also sing English songs,” said the singer.
—[email protected]