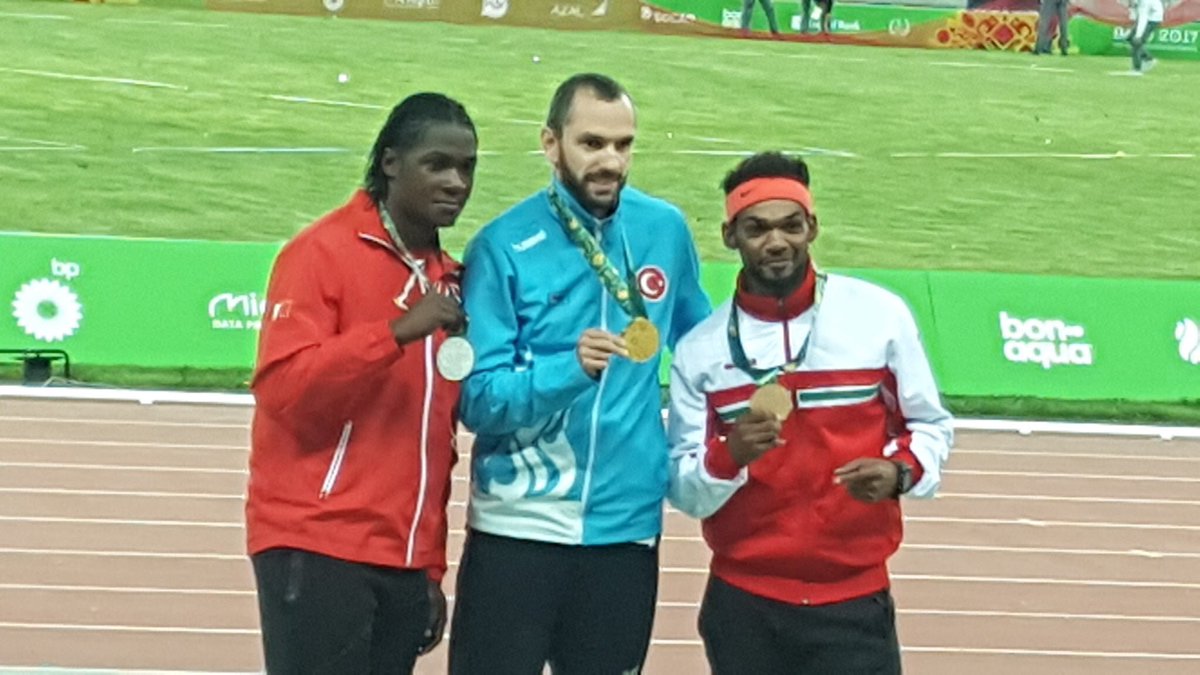 Muscat: Star sprinter Barakat Al Harthy and shooter Hamed Said Al Khatri claimed bronze medals to take Oman’s medal tally to four in the ongoing Islamic Solidarity Games in Baku, Azerbaijan on Tuesday.
Hamed Al Khatri won Oman’s third medal when he claimed the bronze in the 50m Rifle 3 Position competition in the morning and later in the evening, Barakat won the 100m bronze to increase the total to four.
In the 100m final, Barakat was quick off the blocks with a reaction time 0.128 seconds and ran a superb race. He went on to complete the race in 10.35 seconds to settle for bronze.
Turkey’s Ramil Guliev won the gold medal in a time of 10.06 while Bahrain’s Andrew Fisher took silver in 10.16 seconds.
**media[668070]**
In the shooting range, Al Khatri performed well in all three positions -- kneeling, prone and standing -- to take the third place in a competition that saw the Iranian shooters winning the top two places.
Pourya Norouziyan took the top honours for Iran’s seventh gold medal of the Games while compatriot Hossein Bagheri settled for silver.
Hamed Al Khatri’s bronze is Oman’s third medal after Ismail Al Abri’s silver in the 50m pistol and Said Al Hashmi’s 25m rapid fire pistol bronze.
On Monday evening, Ismail Al Abri was presented with his silver medal.
**media[668071]**
Oman face Cameroon
Meanwhile, Oman football team are preparing well to take on Cameroon in the semifinals, which are scheduled for Thursday.
Unbeaten Oman qualified for the last four stage from Group B after a 1-1 draw with Algeria on Monday. Cameroon booked their place in the semifinals with a 3-0 win over Saudi Arabia in their final Group A match on the same day.
Oman-Cameroon match is scheduled to kick off at 6.30 pm Oman time while the first semifinal involving hosts Azerbaijan and Algeria will start at 12.30 in the afternoon.
Hamed Al Azzani-coached Oman under-23 team will now be looking to get past Cameroon to assure themselves of medal even though the losing semifinalists will also have a chance to lay their hands on the bronze medals in the third-place play-off match.
Oman though needs to adjust to the conditions as their semifinal match will be played on a natural grass pitch as against the group matches which were played on artificial grass pitch.
Hamad Al Azzani, meanwhile, stressed the need for intense training before the semifinals.
While expressing his delight over his team reaching the semifinals, he said: “We are very pleased to qualify for the semifinals with these group of players who are playing for the first time in an international tournament.”
“We now have time to prepare well for the semifinals. This is an ideal opportunity for us to evaluate the players. But we also need to focus on every aspect, including the tactical and technical issues, during the training and see what is good for us in the coming matches.”
On Wednesday morning, Oman’s rising tennis start Younis Al Rawahi will start his campaign in the men’s singles with a match against Ammar Al Haqbani.
In the women’s section, Fatma Al Nabhani, who is hoping to add to the gold medal she won in the 2013 Games in Indonesia, received a first round bye. She play her second round match against Anastasiya Prenko of Turkmenistan on Thursday.