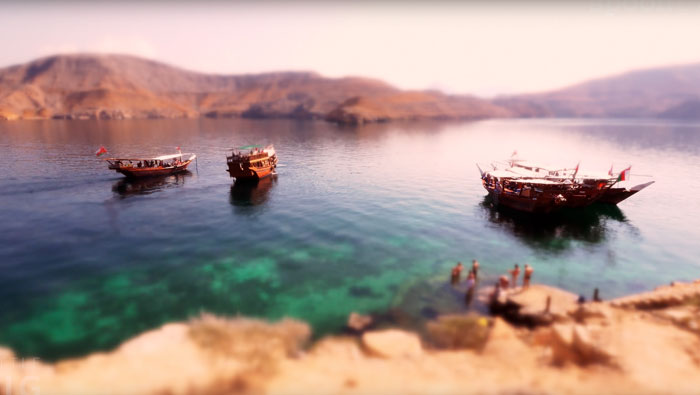 Muscat: A filmmaker has turned scenic Oman landmarks into miniature toy scenery in his dizzying video entitled, ‘Oman Offroad.’
The four and a half minute-long video uses impressive camera effects to characterise important Oman landmarks as miniature toy-like creations.
Joerg Daiber, a photographer and film-maker based in Berlin, calls himself a “travelling tilt-shifter and time-lapser” as he has been visiting different countries to create stunning miniature videos.
**media[663990]**
The Oman video features landmarks, such as the Corniche in Muttrah, the Musandam coast, and different wadis in Oman.
Daiber spoke to the Times of Oman about visiting the country and how his experience had been.
“I spent a bit more than two weeks in Oman, which turned out to be way too short to cover Musandam and all of Oman. That’s also why I decided to skip the Salalah area,” he said.
“Sometimes, it took a few hours to film a scene, or shot, especially for sunsets and sunrises. Sometimes, I would capture what I wanted in just a few minutes.”
The filmmaker used two cameras, the Lumix GH4 and GH2, a tripod, and several lenses to take his time-lapse shots. The tilt-shift effect, however, came in the end when he’d edit his footage in post production.
“With a special lens or editing software, portions of each frame are in sharp, colour-saturated detail, while the edges are blurred. Every scene is, in fact, made up of real footage shot in real places.”
In the video, Daiber introduces many of Oman’s hidden gems to the world. We see a desert sunrise at Wahiba Sands, and miniature cars cutting through sand dunes. In Musandam, Daiber shot boats and ferries crossing vast water landscapes, and individuals playing by the shore.
The filmmaker also captured small moments of the daily life of men and women in farmlands and towns, featuring the beehive tombs in Wadi Dam, and sights from the top of Jebel Shams.
Other than the capital, Daiber also visited Nizwa, Wadi Shab, Wadi Tiwi and Wadi Bani Awf.
Daiber hopes to be back to Oman soon for another experience.
“I love Oman! There are amazingly friendly and helpful people everywhere; there are otherworldly landscapes, and a mixture of traditional and modern life. I just wish I had more time there, and hopefully I will come back soon,” the filmmaker said.
The filmmaker also explored cities in the United Arab Emirates through his videos: ‘Abu Dhabi Abundance’ and ‘Dazzling Dubai.’
To see ‘Oman Offroad,’ visit vimeo.com/208118062.