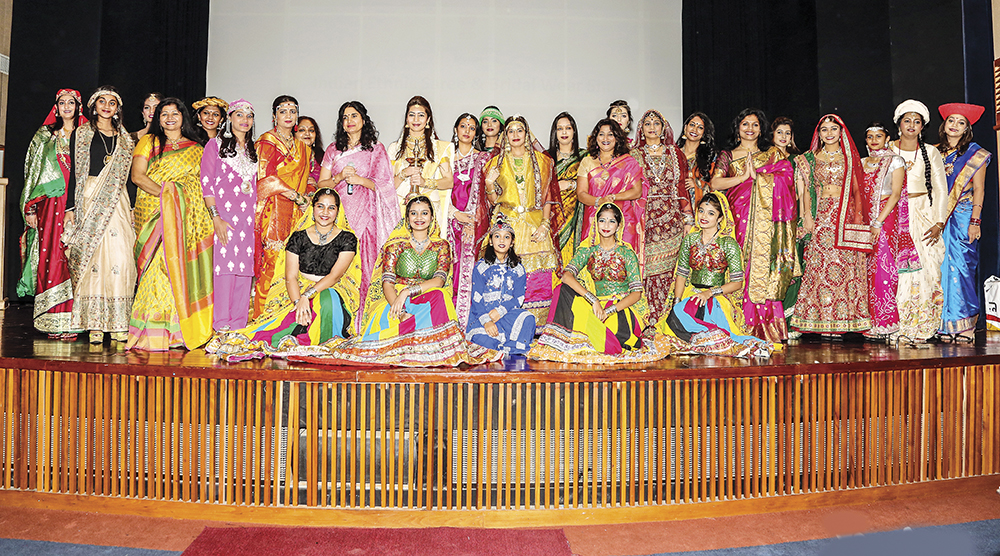 Bright, flashy, and a colourful piece of long cloth embellished with rich tapestry, worn with pride, the saree has traditionally defined the essence of the Indian woman and has been her favourite attire through the ages.

Although made from the most humble ‘cotton’, the rough fabric is woven to the finest hand crafted silk tissues spiked with gold and silver threads. They are woven or printed, embroidered and engraved with appliqué, gold, silver, and precious stone work.

The opulence of Indian textiles has been vividly described by the ancient, medieval and modern travellers, and silk sarees worn by women in India have been the envy of the world.

Saree, the timeless attire, has retained its relevance despite the onslaught of modern clothes by constantly reinventing itself and assimilating new features in texture, colour, print, and design. It has defied the norms of world fashion and set new benchmarks for Indian ethnic wear.

Historically, the saree can be traced back to the Indus Valley Civilisation, which flourished during 2800-1800BC in the northwestern part of the Indian subcontinent. The earliest known depiction of the saree is in the statue of an Indus Valley priest wearing a drape.

Recently Sushma Pandey, wife of the Ambassador of India to Oman Indramani Pandey organised a mesmerising evening of the Indian Ethnic Saree and Bridal Wear at the premises of Indian Embassy in Muscat.

Sushma Pandey spoke about the history and continued significance of the saree in the Indian culture, since time immemorial, saying that saree has been recognised the world over as Indian women’s national attire.

The show was an effort to unravel the mystique of Indian ethnic wear. Saree, which continues to intrigue and mystify women all over the world is a popular garment in the Indian subcontinent and patronised by countries such as Nepal, Bangladesh, Sri lanka, and Pakistan other than India.

She pointed out that saree, six yards of elegance and comfort, a quintessential Indian garment, has mesmerised women in Indian subcontinent and has been worn by them since antiquity and the resilience of saree reflects the resilience of Indian culture.

Speaking about the regional diversity in the ways in which sarees are made and draped, she said that weavers and designers have generated a treasure house of ideas and created a vast range of sarees that if a woman wore a different saree each day, the weaves, prints and designs would be all different from one another during her entire life span.

A power point presentation was also made to highlight the rich heritage of Indian sarees and the vast variety of beautiful handwoven sarees.

Women from the Indian community in Muscat walked the ramp in some of the above mentioned varieties, showcasing some exquisitely crafted sarees from various states of India, worn in different styles.

An exhibition of Indian ethnic saree collection, displaying the distinct, diverse and rich saree traditions of India, sourced from Lulu Hypermarket, was also on display. A Bridal Wear Show, depicting different costumes worn by brides during their marriage, from diverse regions of India, was another attraction of the evening.
The demonstration of how to drape a saree drew great enthusiasm and interest from among the hundreds of women, who attended, including many Omani women and those from other nationalities.

There are more than 80 ways of draping a saree but the most common drape is to wrap the saree around the waist with one end draped over the shoulder. A booth was set up for those who wished to try draping a saree, which was also enjoyed by enthusiastic participants.
–[email protected]