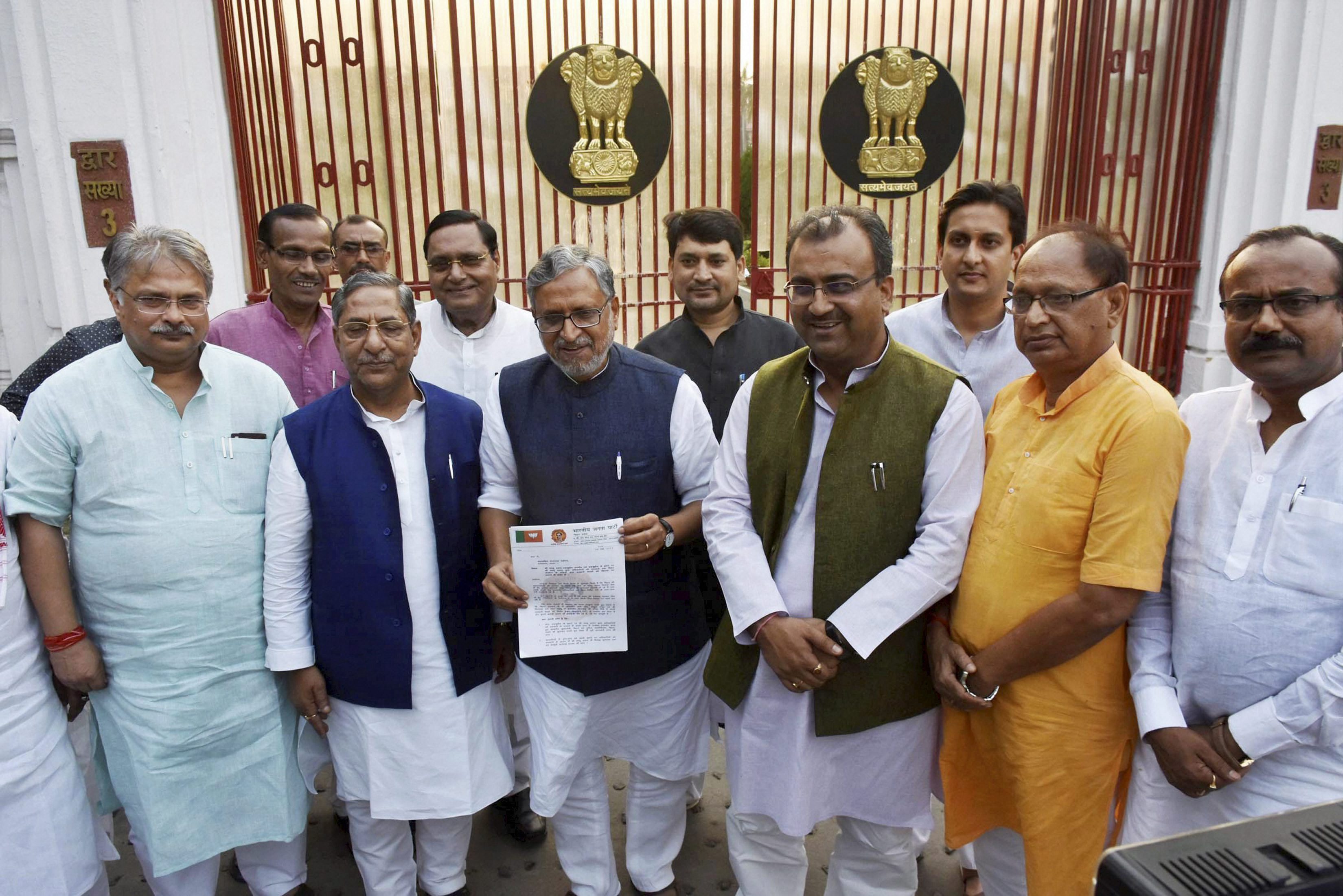 Patna: The BJP in Bihar demanded filing of a criminal case against Rashtriya Janata Dal president Lalu Prasad on Saturday over his purported telephonic conversation with jailed gangster Mohammad Shahabuddin.
Senior BJP leader Sushil Kumar Modi also demanded that the state government approach the Supreme Court for the cancellation of bail of Prasad, presently out on a conditional bail in a fodder scam case.
A BJP delegation, comprising Sushil Modi, Nand Kishore Yadav and former state party chief Mangal Pandey, met Governor Ramnath Kovind on Saturday evening and submitted a memorandum in this regard. A news channel on Saturday played the purported telephonic conversation between Lalu and Shahabuddin, a four- time Lok Sabha MP and senior office bearer of the RJD.
Shahabuddin is heard telling Lalu, "SP khatam hai (the SP is a gone case)" and complaining that due to "inadequate" security arrangement there was violence at a few places in Siwan during the Ram Navami festival. The RJD chief is then heard asking his aide to connect him to the Siwan superintendent of police.
Meanwhile, the Siwan BJP MP, Om Prakash Yadav, demanded Chief Minister Nitish Kumar's resignation. "These media reports prove that the Bihar government has lost its spine and bowed before Lalu Prasad." Om Prakash Yadav had contested the 2004 Lok Sabha election against Shahabuddin.
Unconfirmed reports suggest that the chief minister spoke to state police chief P. K. Thakur over the issue. All efforts to talk to the DGP for a confirmation went in vain as he did not pick calls.
Earlier in the day, senior RJD leader and former MP Jagdanand Singh, while coming out of the 10 Circular Road residence of Lalu's wife Rabri Devi, told media that Shahabuddin was a party member and that there was no crime in talking to him.
Janata Dal(United) spokesmen Upendra Prasad, who had a meeting with Nitish Kumar on Saturday evening, avoided making categorical statement over the episode. Named in over 40 criminal cases, including in the killing of vernacular journalist Rajdev Ranjan recently, Shahabuddin is presently lodged in the Tihar Jail.
The apex court had ordered for his transfer to the Tihar Jail from the Siwan Jail on a prayer of Rajdeo's widow and also that of father of three brothers alleged to have been killed on the orders of Shahabuddin in the past. Shahabuddin has been in and out of controversy.
Last year, as he walked out of a Bhagalpur jail, he created a furore describing Nitish Kumar as a "cirumstantial CM". The RJD, with 81 MLAs, is the largest constituent in the grand alliance government in Bihar.