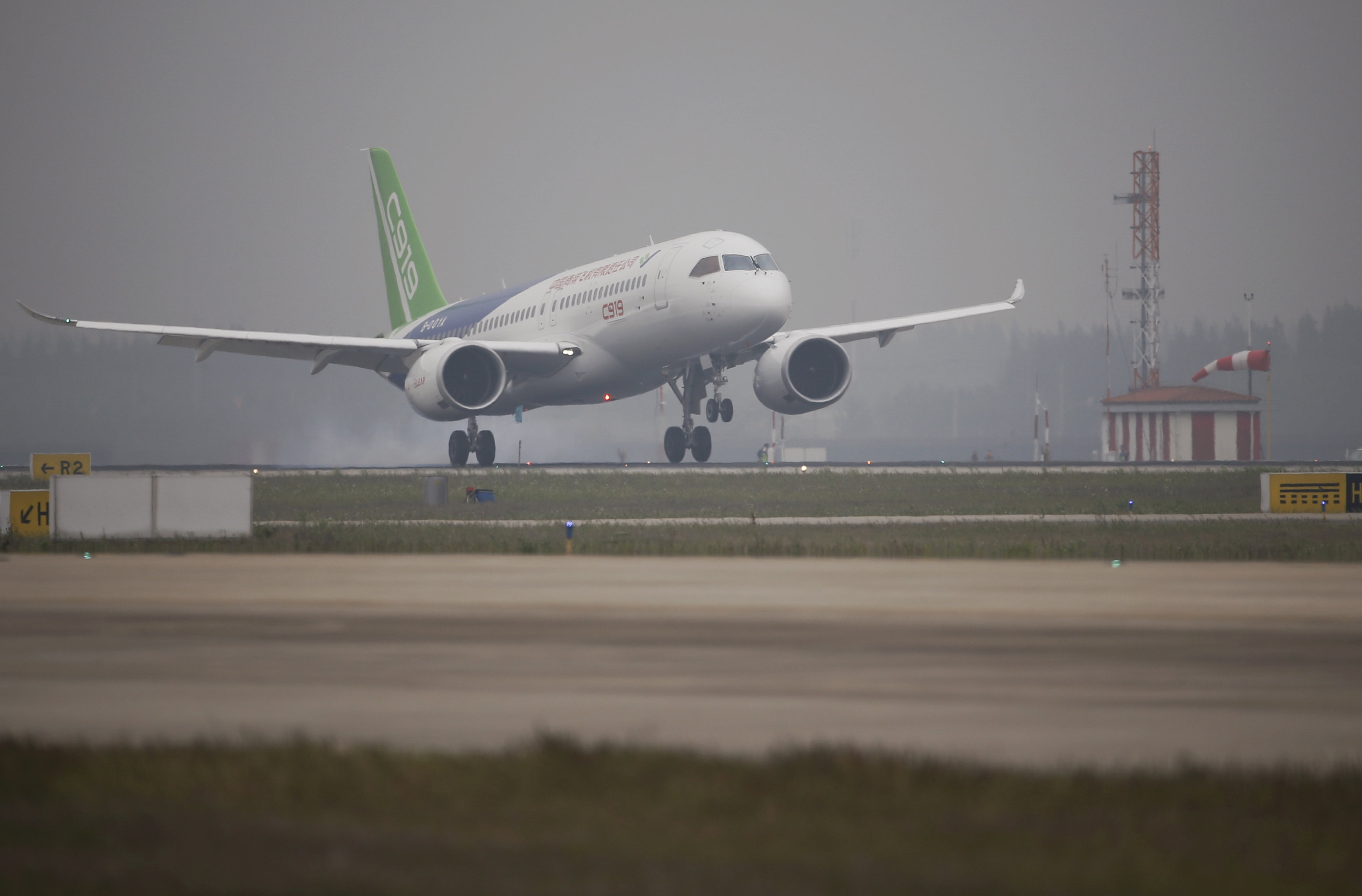 Shanghai: China's home-grown C919 passenger jet completed its long-delayed maiden flight on Friday, a major first step for Beijing as it looks to raise its profile in the global aviation market and boost high-tech manufacturing at home.
Under overcast skies, the white, green and blue aircraft, with "C919" emblazoned on its tail, touched down at Shanghai's international airport after an 80-minute flight to cheers from thousands of dignitaries, aviation workers and enthusiasts.
The jet is a symbol of China's ambitions to muscle into a global jet market estimated to be worth $2 trillion over the next two decades, as well as of Beijing's broader "Made in China 2025" plan to spur home-made products, from medicines to robots.
"Seeing the C919 take off into the sky made me quite emotional. This is a moment we have waited to see for a very long time," Wang Mingfeng, 42, who witnessed the maiden flight at the Shanghai airport, told Reuters.
"I believe that in the not too distant future, we will be neck-and-neck with Boeing and Airbus."
At the moment, though, Boeing and Airbus remain far ahead in terms of sales, technical know-how and order books. And the C919, whose test flight was pushed back at least twice since 2014 due to production issues, may need years of tests to get certified in China, as well as in the United States and Europe.
On Friday, the C919 flew north over the Yangtze River delta, carried out manoeuvres and then returned south along the coast before landing, according to aircraft tracker Flightradar24. State media said the plane flew at around 3,000 metres and at speeds of 290-300 kilometres (180-186 miles) per hour.
The crew of five pilots and engineers, all wearing orange jump suits and aviators, were applauded as they disembarked. The plane, which can carry 158-168 passengers, had no passenger seats installed for the maiden flight.
A letter from China's ministerial cabinet, read out after the plane landed, said the successful flight marked a "major breakthrough" and milestone for China's passenger jet industry. The industry ministry said in a statement the flight went smoothly and that all the systems functioned properly.
The C919, made by state-owned Commercial Aircraft Corporation of China (COMAC), relies on overseas technology from firms including General Electric, France's Safran, Honeywell International Inc and United Technologies Corp subsidiary UTC Aerospace Systems.
China Eastern Airlines is the launch customer for the plane, which COMAC says has 570 orders from 23 customers.
Hardship, struggle
Conceived in 2008, China wants the C919 to eventually take market share from Boeing and Airbus in the lucrative narrow-body market which accounts for more than 50 per cent of the aircraft in service worldwide.
"Every year we spend billions on buying planes," a COMAC promotional video showed President Xi Jinping saying during a site visit. He added China should become more self-reliant.
However, the jet likely faces a lengthy journey from first flight to commercial usage.
China's first home-made jet, the regional ARJ-21, received its type certification in December 2014, six years after its first flight and more than 12 years after it was conceived. It made its maiden passenger flight in June last year.
Then there is also the daunting task of selling the jet in a global market dominated by Boeing and Airbus.
"Aviation is a complex market and you need experience over a long time. Boeing has 100 years, Airbus has over 40 years," said Sinolink Securities analyst Si Jingzhe, adding COMAC still lagged far behind in terms of supply chain know-how.
China is aware the path won't be easy. On a media visit on Thursday to COMAC's C919 assembly plant less than 10 kilometres from the airport, large red banners could be seen in giant hangars calling for long-term "hardship", "dedication" and "struggle" to meet the firm's goals.
China is pushing for recognition globally of its certification by European and US regulators as without their certification, it would only be able to sell the jet to a handful of countries that accept its certification standards.
But Beijing is already looking beyond the C919, with plans to develop a wide-body long-haul jet with Russia. In November COMAC and its partner United Aircraft Corp said they have started the hunt to find suppliers.