Oman open to all to help find peace in Middle East 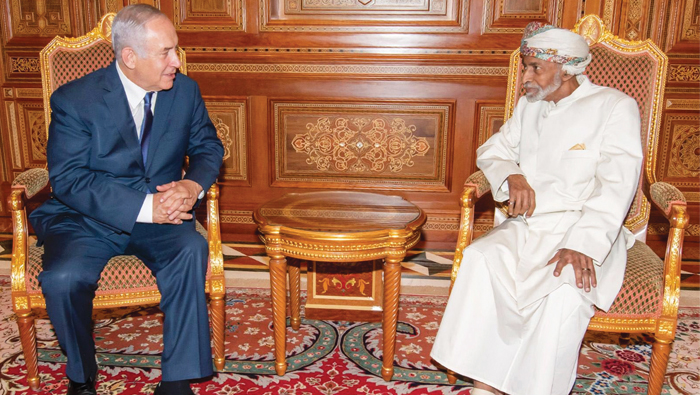 Muscat: Since the launch of Oman’s modern Renaissance march over the past decades under the leadership of His Majesty Sultan Qaboos bin Said, His Majesty has laid down clear-cut policies and stances by which Oman abides, with regard to various issues and developments.

Regardless of whether such issues pertain to the GCC, the Arab world, the region, or the international arena, Oman has a set of permanent principles and values, centres around attaining peace by resolving conflicts through dialogue and non-violent means. This stems from an understanding that peace, security and stability are necessary pillars for achieving progress and prosperity and for providing a suitable climate to enable better future cooperation for the countries of the region.

Over the past years and decades, the Sultanate has spared no effort in working for the sake of achieving peace and establishing a fair solution through constructive dialogue in the framework of international legitimacy, not only in the case of the Palestinian issue which constitutes the Arab countries’ central issue and which has been accorded special attention by the Sultanate and His Majesty Sultan Qaboos in person, but also in respect of various other issues and developments in the GCC, Arab, regional and international arenas. Examples of this positive action are countless, since Muscat has served as focal gateway and an important entry-point for many regional and global leaders in their endeavours to attain rapprochement and settlement of conflicts through dialogue for the sake of common and balanced interests of the parties concerned.
As usual, the Sultanate acts promptly and exerts its benign efforts without delay for the sake of rapprochement and overcoming of disputes and resolving problems, particularly when the parties concerned resort to His Majesty the Sultan.
The official visit of Mahmud Abbas, President of the State of Palestine and Chairman of the Executive Committee of the Palestinian Liberation Organisation, to the Sultanate on October 22, 2018 and the audience accorded to him by His Majesty the Sultan constitute a significant step with regard to Oman’s efforts to support the stand of the Palestinian side’s quest for a peaceful, fair and comprehensive solution and for the establishment of an independent Palestinian State, with East Jerusalem as its capital—all within the framework of the two-states’ solution which is supported by the international community. President Abbas described his discussions with His Majesty the Sultan as extremely important.
Positive contribution
The significance and value of Omani positive contribution to peace has become stark clear upon the announcement today of the visit of Israeli Prime Minister Benjamin Netanyahu to the Sultanate and his meeting with His Majesty Sultan Qaboos bin Said on Friday. This visit sheds more light on the Sultanate’s efforts made in preparation for the resumption of contacts and the activation of the peace process between the Palestinians and Israelis.
The past few years showed clearly that there is no way but to reach a comprehensive, fair and permanent peace that achieves security and stability, not only for the Palestinian people, but also for the Israeli people and the region as a whole, since the solution of the Palestinian issue is central to peace and stability in the region so that its people could face the various
challenges that face them now.
Yousuf bin Alawi bin Abdullah, Minister Responsible for Foreign Affairs, had said in his speech before the UN General Assembly on September 29, 2018 that the current conditions, despite their difficulty and despite the halt of dialogue, have become suitable for founding an environment for positive discussions between the Palestinian and Israeli sides towards a comprehensive settlement based on the two-states solution.
Peaceful coexistence
Alawi, in his speech, pointed out that “The Sultanate is willing to exert all possible efforts for the restoration of a climate of optimism to reach a comprehensive accord that takes into account a future of peaceful coexistence in the Middle East, and for the Palestinian and Israeli generations.”
The visit of Palestinian President Mahmud Abbas to the Sultanate (October 21st-23rd) and the visit of the Israeli Prime Minister, and His Majesty the Sultan’s audience to both of them have many positive implications about the role of the Sultanate in serving peace through dialogue, whether in the case of the Palestinian issue or in the case of Yemen, Libya and other Arab and regional issues. It reflects a deep faith in peace and efforts for stability and prosperity in all countries and people of the region and their aspiration for a better future.
Oman’s stance and contributions to peace are well-understood and valued by the people of the region and the world, as well as their leaders, though some of these contributions are not declared.
The Sultanate would take satisfaction in seeing security, peace and stability established in the region and for the region’s people and when these countries cooperate in accordance with the principles advocated by the Sultanate for the achievement of joint interests today and tomorrow.