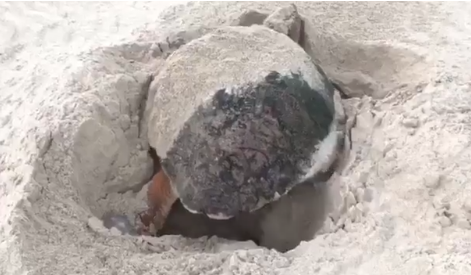 Masirah: The Environment Society of Oman (ESO) on Monday released a video of a Loggerhead turtle they had spotted on a beach in Oman, with one of its flippers missing.

In the video, shot by Ghasi Al Farsi in Masirah, the turtle can be seen digging up sand to lay its eggs. As the video pans towards the right, the turtle's right rear flipper is noticeably missing.

According to the ESO's tweet, the turtle could have lost its flipper after being caught in either a fishing net or a boat's propeller, but was still able to make do without it.