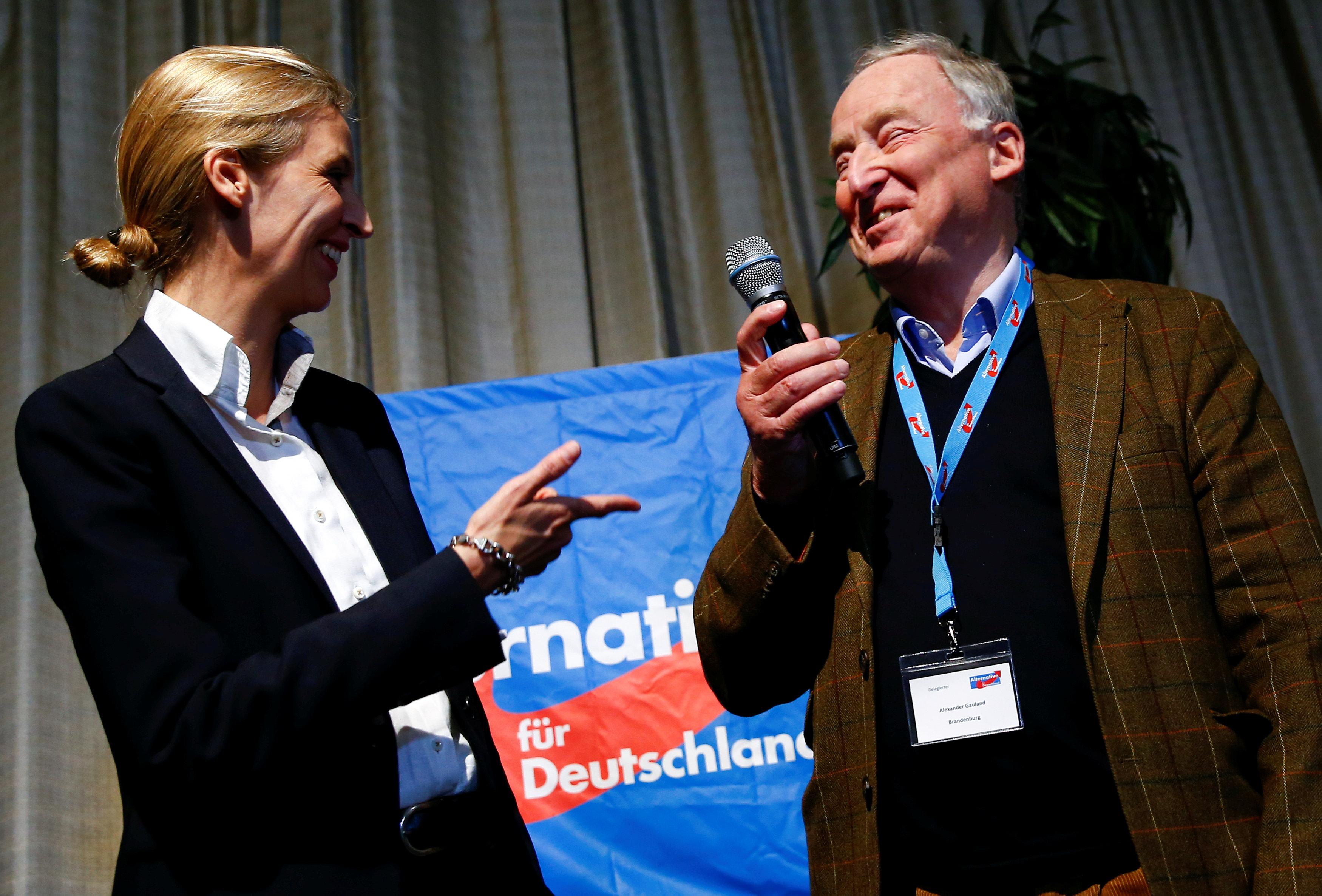 Cologne (Germany): The anti-immigrant Alternative for Germany (AfD) party on Sunday chose a tough-talking former member of Chancellor Angela Merkel's conservatives and an economist to lead its campaign for a September election in a line-up likely to drag the group further right.
The party stole voters from Merkel during the migrant crisis but now looks less of a threat to her bid for a fourth term, with 8-10 per cent in polls. The AfD has bled a third of its support as the refugee influx slowed while infighting and a controversy damaged the party's image.
A majority of AfD delegates at a congress in the western city of Cologne backed 76-year-old publicist Alexander Gauland and Alice Weidel, a 38-year-old former investment banker, as candidates fronting the party's bid to win seats in the national parliament for the first time in a September 24 election.
The vote followed a surprise announcement on Wednesday by co-leader Frauke Petry, the party's public face, that she would not lead the AfD's election campaign - a move that could boost mainstream parties such as Merkel's conservatives.
Gero Neugebauer, a Berlin-based political expert, said the choice of candidates would not affect the party's prospects because most AfD members would not vote based on the people representing it as they have no chance of power. But the duo chosen signalled the party was shifting further right, he said.
"Both people represent the AfD as a party that wants to present itself as middle-class, conservative and economically liberal but which is in essence a party that is moving further to the right," Neugebauer said. Georg Pazderski, head of the AfD in Berlin, told Reuters the AfD was not moving right but was often blamed for comments made by individual members. The party represented views ranging from liberal conservative to national conservative "but of course on the foundation of the Constitution, the free and democratic basic order", Pazderski said.
Gauland is widely seen as a supporter of senior AfD member Bjoern Hoecke.
A lawyer who grew up in the former communist East before fleeing to West Germany to go to university, Gauland once compared refugees coming to Germany with barbarians who brought down the Roman Empire. Sporting his trademark tweed jacket in Cologne, Gauland said the AfD wanted "to keep the country we inherited from our mothers and fathers" and preserve German identity, adding: "We're proud to be Germans." He said Merkel, whom the AfD attacks for allowing in more than a million migrants over the last two years, must be overthrown so Germans can get their country back, drawing applause from delegates who shouted: "Merkel needs to go!" Weidel, a little-known figure in the AfD and seen as more moderate, is in favour of expelling Hoecke. A critic of the euro who has worked in China, Weidel has sought to establish herself as an economic expert.
Speaking in Cologne, she said the AfD would get into regional parliaments in Schleswig-Holstein and North Rhine-Westphalia in state elections in May. "Then we'll rock Germany" and become the only "real opposition party" in the lower house after September's election, she said. "Political correctness belongs to the scrap heap of history," she added.
The AfD, which has lurched to the right since being founded as an anti-euro party in 2013, is treated as a pariah by established political groups, which refuse to work with it. Delegates refused on Saturday to discuss Petry's motion to shift the party into the "mainstream" and be prepared to join coalitions after an election in 2021.
Petry told Reuters the AfD should have decided at the congress on its future strategy and drawn red lines, adding the AfD could learn from France's Marine Le Pen as her National Front had seen election results improve since doing so.