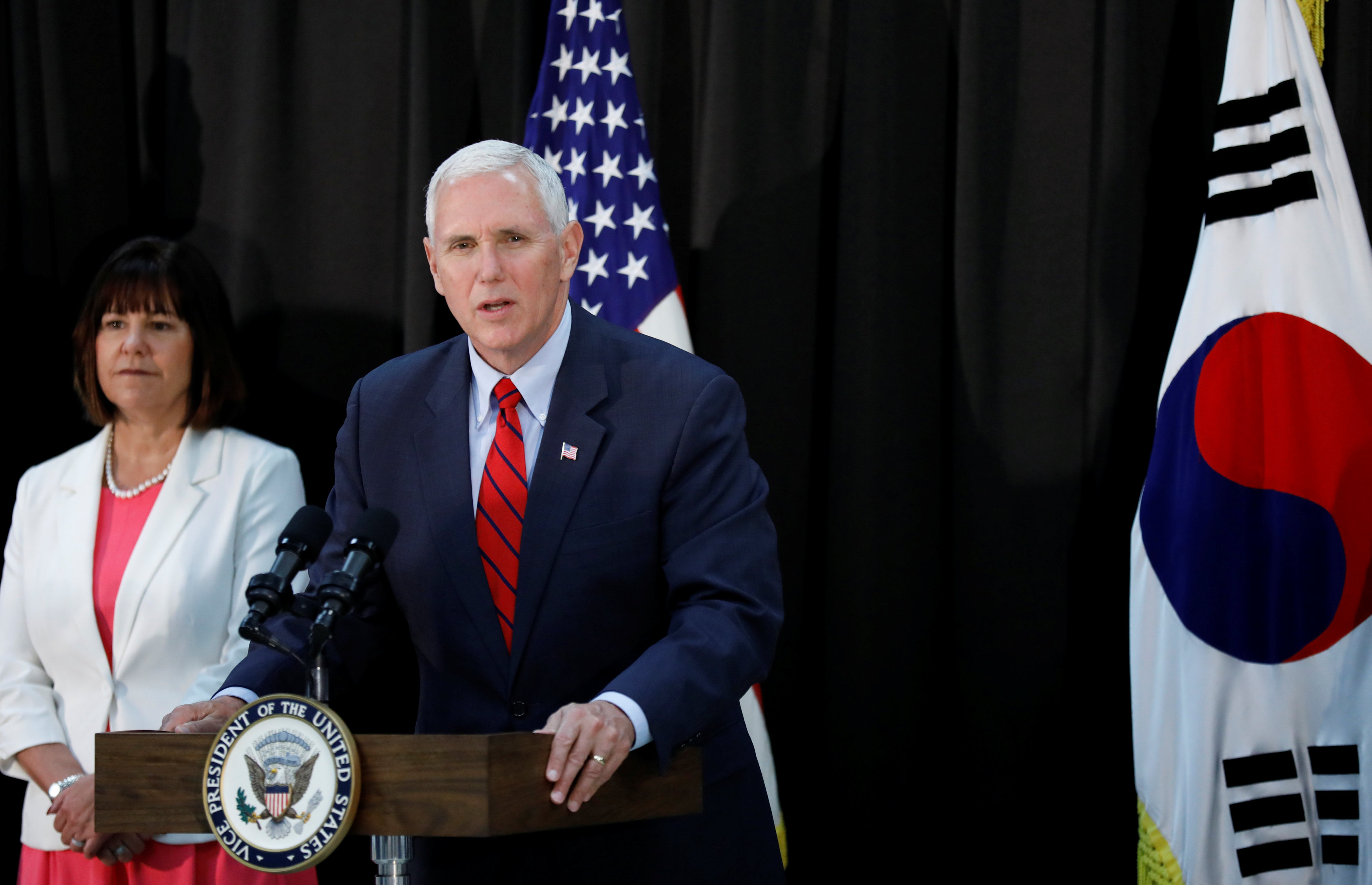 Seoul: Pledging that the U.S. commitment to South Korea has never been stronger, Vice President Mike Pence is set to meet on Monday with the nation's acting president, the day after North Korea launched a missile that blew up almost immediately.
The failed launch occurred as Pence was flying over the Bering Sea on his way to Seoul, the first stop on a four-nation Asia tour intended to show America's allies - and remind its adversaries - that the Trump administration is not turning its back on the increasingly volatile region.
Pence spent almost no time speaking directly about the missile launch on Sunday, referring to it only as "this morning's provocation from the north" in remarks he made at an Easter lunch with some U.S. troops and their families.
Instead, he talked about his dad, who fought in the Korean War, and had a Bronze Star for heroism pinned to his chest this week in 1953, using the story to illustrate the commitment Americans have to South Korea.
"As we landed today on the peninsula, I looked out at those rolling hills, and I thought about Second Lieutenant Edward J. Pence," Pence said.
Pence's talks with South Korea's acting president, Hwang Kyo-ahn, come as U.S. President Donald Trump has warned he will not tolerate provocations from North Korea and has dispatched an aircraft carrier strike group and attack submarines to the region.
The U.S. government has deployed the Theater High-Altitude Air Defense (THAAD) anti-missile system to help protect its ally.
During his campaign for office last year, Trump expressed ambivalence about protecting Asian allies. He has since sought to show his commitment, and has sent his top diplomat and defense secretary, as well as Pence, to the region to reinforce his message.
Pence's tour, which will also take him to Tokyo, Jakarta and Sydney, was described a "show the flag mission” by one official who assisted in planning it.
Pence will underscore the importance of the U.S. Pacific military alliances in Japan, where he will meet again with U.S. service members, but much of his visit there will be devoted to economic and trade issues, chiefly in a meeting with Deputy Prime Minister Taro Aso, who also serves as finance minister.
He wants to demonstrate U.S. economic interest in the region after Trump abandoned the Trans-Pacific Partnership (TPP), a trade deal negotiated by former President Barack Obama.
It's the second foreign trip for Pence as vice president. His first, to Munich and Brussels, also involved reassuring allies nervous about Trump's commitment, in this case to NATO and the European Union.
Pence, a former Republican congressman, so far has been more involved in helping Trump navigate domestic policy issues, said Peter Feaver, a top National Security Council aide in the George W. Bush White House.
The Asia trip will help expand Pence's foreign policy footprint, but the vice president likely will find himself spending a lot of time explaining the policies and statements of Trump, an untraditional politician who is nearing the end of his first 100 days in office.
"All of that seems to be playing defense. He’s going to want to be playing offense," Feaver said.
"What the administration needs to do is to sketch out an Asia framework," he said.