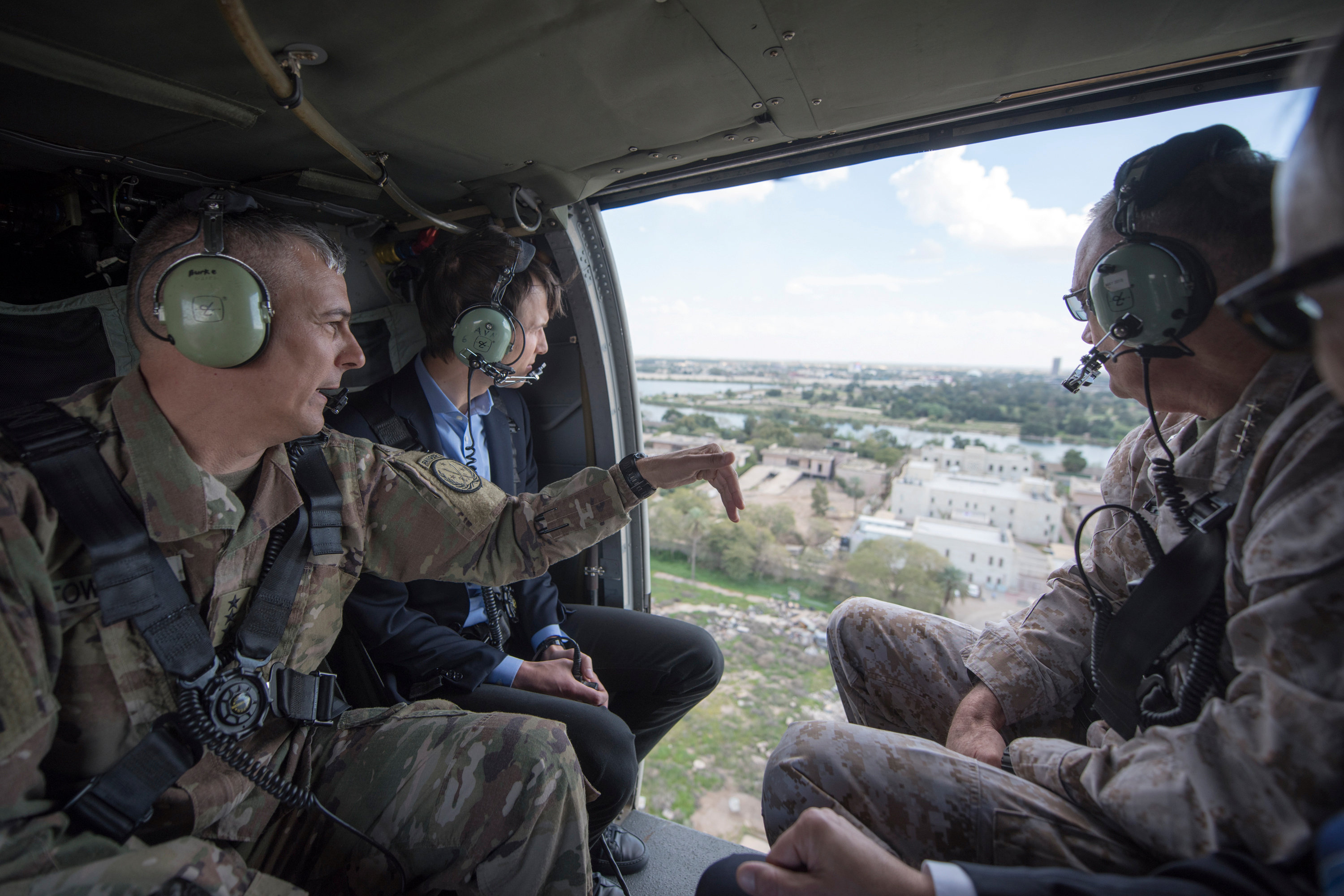 Qayyara West Airfiled (Iraq): President Donald Trump's son-in-law, Jared Kushner, voiced optimism about the long-term U.S. alliance with Iraq's military and its campaign to retake Mosul from IS on Tuesday, as he visited a base about 10 miles (16 km) from the city.
Kushner was on the last day of a two-day trip to Iraq as the guest of Marine General Joseph Dunford, chairman of the U.S. military's Joint Chiefs of Staff. The visit to the Hammam Al Alil base included an operational briefing from Iraqi and U.S. commanders.
The trip has demonstrated the far-reaching portfolio of Kushner, 36, who is part of Trump's innermost circle and who has been given a wide range of domestic and foreign policy responsibilities, including working on a Middle East peace deal. His views on Iraq could shape Trump's own opinions.
It comes as Trump is examining ways to accelerate a U.S.-led coalition campaign that U.S. and Iraqi officials say has so far been largely successful in uprooting IS militants in Iraq and Syria.
Mosul is by far the biggest city to have been held by IS
There are mounting concerns about civilian casualties in the final phases of the assault and questions about how quickly Mosul can be rebuilt, repopulated and governed in a way that avoids alienating its population.
The Mosul battle, the biggest in Iraq since the U.S.-led invasion in 2003, has been under way since October, with 100,000 Iraqi troops, Kurdish fighters and militiamen seeking to drive out the militants with the support of U.S.-led air strikes.
Although Trump campaigned on defeating the hardline militant group, he has not announced any major changes to war strategy and it is unclear how Kushner's experience in Iraq might shape his advice to the president.
Speaking after lengthy battlefield reports from Iraq's military, Kushner sounded upbeat about the campaign and said the partnership between U.S. and Iraqi troops was "very impressive."
He expressed hope the partnership would be enduring, signaling White House interest in longer-term U.S. military assistance.
"I hope the victory that you have in Mosul in the near future will not just be a victory for the American and Iraqi troops but it will be a victory for the world," Kushner said.
On Tuesday, IS issued its first official remarks referring to Trump since he assumed the U.S. presidency in January, describing him as an "idiot."
"You (the U.S.) are bankrupt and the signs of your demise are evident to every eye," spokesman Abi Al Hassan Al Muhajer said in a recording released on the messaging network Telegram.
"There is no more evidence than (that) you being run by an idiot who does not know what Syria or Iraq or Islam is."
Even after Mosul and other pockets of territory are recaptured, U.S. officials expect IS to go underground and fight on as a more traditional insurgency.
Kushner's trip was his first to Iraq and the visit to Hammam Al Alil, where U.S. advisers and artillery are positioned to assist the battle in Mosul, was also the closest Dunford has gotten to Mosul since the campaign began.
They stopped briefly at Qayyara West Airfield, another key hub in the war, where U.S. forces manning High Mobility Artillery Rocket Systems fired twice at IS targets in Mosul the night before.
Iraqi security forces are engaged in fierce, house-to-house fighting in Mosul. Nearly 290,000 people have fled the city to escape the fighting, according to the United Nations, and it has had a heavy toll on civilians trapped in the city.
The advance has been slowed since March 17, when scores of people sheltering from air strikes were killed in a blast. The United States has acknowledged it may have had some kind of role in the incident but also said IS may be to blame. A U.S. investigation is ongoing.
Dunford said Baghdad was looking at ways to better safeguard civilians, given tactics by IS that has raised the risks - including the use of civilians as human shields.
"The Iraqis are looking to make some adaptations," he told reporters after the talks, which included meetings on Monday with Iraqi Prime Minister Haider Al Abadi in Baghdad.