Fire breaks out at militants' hideout in Bangladesh 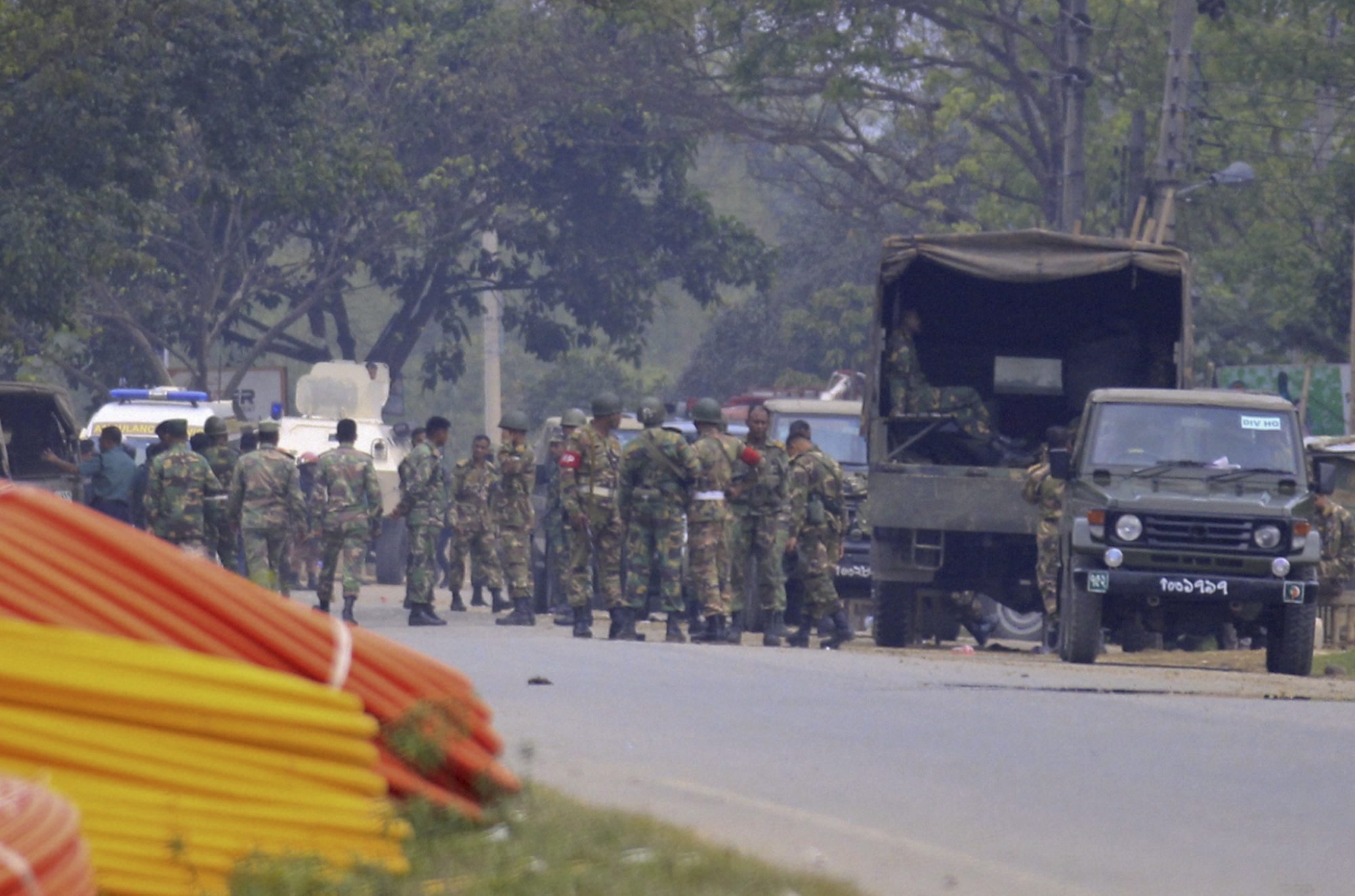 Dhaka: Fire broke out on Monday at a five-storey building occupied by the militants in Bangladesh's northeastern Sylhet city, as the 'Operation Twilight' by army to flush them out of the apartment continued.
Large gusts of smoke were seen coming out of the ground floor - where the militants were holded up - around 3:40pm (local time). Fire fighters rushed to the scene and controlled the flames within 20 minutes, the Daily Star reported. Army quickly moved in from the rear preparing for what it seemed like another assault, it said.
Around noon, the army used megaphones to ask the militants, who were holed up in the building, to surrender. However, there was no response from the other side. After a relative lull since Sunday night, sporadic gunfire and explosions were heard this morning from the building. Locals said they could hear burst of automatic weapons and explosions once again after 6am (local time).
"We heard sporadic gunshots and explosions," a resident in the northeastern city told PTI. Security has been beefed up in the area and police have restricted public movement in two square kilometres of the militant hideout. The army said completion of the operation is being delayed as the building has turned into a death trap due to a lot of improvised explosive devices set by the militants inside the house, Prothom-Alo reported.
Army commandos shot dead two militants at the building on Sunday, a day after six people were killed and 50 injured on Friday in blasts claimed by the IS outside the hideout. The commandos located the militants wearing suicide vests on the ground floor of the five-storey building and shot them dead, Army spokesman Brigadier General Fakhrul Ahsan said. Eight persons have been killed so far in the operation.
The military operation entered its fourth day on Monday in this northwestern city, about 236 km from the capital Dhaka. "There are several more well-trained operatives active inside the hideout," Ahsan said. He said that the assault was far from over and pointed to "considerable risks" involved in it. Ahsan added that the militants were equipped with small arms, explosives and grenades and laid out booby traps at different corners of the building creating a situation which slowed down the operations progress at the building. "The entire area has become risky. Considering the overall situation, it will take more time for the operation to complete," he said. The operation was launched after a suicide bomber on Friday night blew himself up at the international airport in Dhaka in an attack claimed by the IS. It came a week after an identical attack on a RAB camp in Dhaka.
On Saturday, two powerful bombs ripped through a crowd near the hideout, killing six people, two being police officers and injuring about 50, including two army officers currently serving the elite anti-crime Rapid Action Battalion.
Hours later the IS claimed responsibility for the attack through its propaganda news agency 'Amaq'. Home Minister Asaduzzaman Khan, however, rejected the IS claim, saying that there was no presence of any foreign terrorist group in the country.
The officials said they were not sure about the number of militants inside the building but hinted that a top militant leader was inside the complex. Counter-Terrorism and Transnational Crime chief Monirul Islam on Sunday said they got information that JMB chief Musa along with some other JMB militants were in Sylhet.
The neo-JMB, said to be inclined to the IS, was behind the July 1 terror attack on a Dhaka cafe in which 22 people, including 17 foreigners, were killed.
Meanwhile, residents who lived in the building said they were virtually taken hostage by militants who warned them of bombs implanted on their way out. The commandos brought them out from the top of the building making their way there from the rooftop of an adjacent structure.
Bangladesh has been witnessing a spate of attacks on secular activists, foreigners and religious minorities since 2013. The country launched a massive crackdown on militants specially after the Dhaka cafe attack.