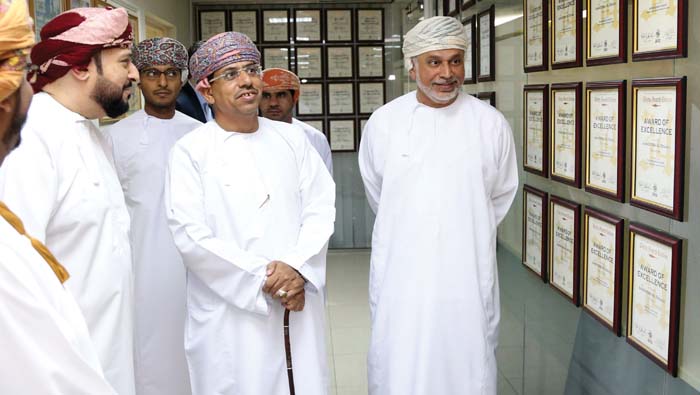 Muscat: His Excellency Dr Abdulmunim bin Mansour bin Said Al Hasani, Minister of Information, visited Muscat Media Group headquarters yesterday to congratulate the group’s award winning journalists and design teams.
In pictures: Oman information minister visits MMG office
“The media has always been the bright image of the country and Oman’s media depicts the picture of Oman, be it within or outside the country.
“The media showcases the achievements and sheds light on the causes and concerns of the society and promotes Oman at the international community and introduces the beauty and culture of the country,” His Excellency told management and staff of Muscat Media Group.
During his visit the minister took time to honour the winners in the 38th international competition on the best news designs organised by the Society of News Design (SND) in St. Petersburg, in the State of Florida, USA.
On arrival at the head office of MMG, the Minister was received by Chairman of the Board of Directors of Muscat Media Group, Mohamed Issa Al Zadjali and CEO of Muscat Media Group Ahmed Essa Al Zadjali, a number of managers, journalists, designers and employees of Muscat Media Group.
The Minister toured the various sections of MMG, where he was briefed on the history and achievements of the Group and the foundation of Times of Oman and its sister paper (Al Shabiba) and the other supplements and magazines published by MMG.
The Minster praised the efforts and achievements of the Group.
“The prizes and awards bagged by the group represent an addition to Oman’s media achievements” he said, adding, “we are proud of such achievements and we hope the group would always add new prizes and awards.
“Muscat Media Group has made its presence felt at the international level. The achievement is a testimony of critics at the world level.
“Print journalism faces challenges at the international level, and Muscat Media Group has become aware of the same at an early stage and as such has diversified its sources of income,” he said. The Group had an appreciable presence in the E-press / paper and at social networking, he added.
The minister presented the winners with commemorative gifts and the Group presented the Minister with a portrait of His Majesty Sultan Qaboos bin Said bearing names of over 80, 000 people who expressed their love and loyalty to His Majesty the Sultan during the campaign organised by TOO and Al Shabiba under the theme “ We Love His Majesty the Sultan” during the last National Day celebrations.
Muscat Media Group has won 18 prizes in the aforementioned competition organised by SND. “Mazaj” section of Al Shabiba has won five prizes by news designs, last year.