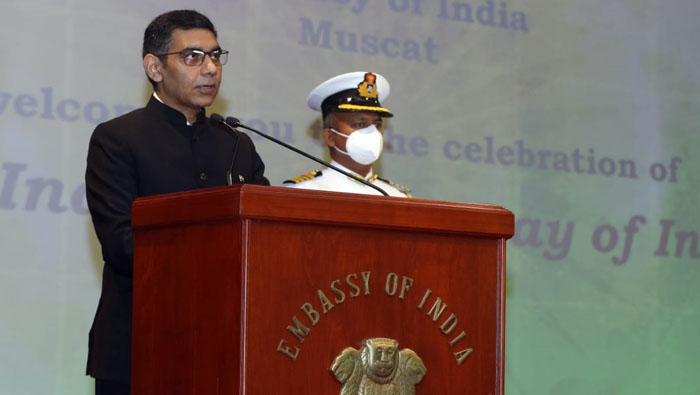 Muscat: India’s ambassador to Oman has said that relations between the two countries have improved, owing to exchanges between them during the COVID-19 pandemic.
Speaking on the occasion of his country’s Independence Day, ambassador Munu Mahawar explained that the long and friendly relationship the two states have is due to the shared values and common interests they hold.
“We also have convergent approaches in regard to international relations – we seek friendship with all and enmity with none,” revealed the Indian envoy. “A stronger partnership between India and Oman will benefit not only the peoples of our two countries, but also the entire region.
“There are many areas where India and Oman can work more closely together,” added Mahawar. “Let me say that Oman has huge reserves of limestone and gypsum which India needs to further develop its infrastructure sector. In the oil and gas sector, there are opportunities for collaboration in both upstream and downstream areas.
“Given its location and international trade arrangements, Oman can become a gateway for Indian companies to tap the wider GCC, African or the US markets,” the ambassador went on to say. “India can share its technological know-how and contribute to Oman’s capacity building efforts, which we are already doing but our collaboration can be scaled up.”
With India recently announcing its intentions to make its economy more self-sufficient through its Atmanirbhar Bharat Abhiyaan, or Self Reliant India Movement, Mahawar is confident that this will lead to stronger trade ties between Oman and his country.
“In the coming period, we look forward to strengthening our economic engagement and also initiating cooperation in some new areas such as mining and food security,” he said. “We strongly believe that India can be a reliable partner for Oman in all priority areas identified by it and in the realisation of His Majesty Sultan Haitham’s bin Tarik’s vision to make Oman a knowledge economy.”
Mahawar went on to add: “The India-Oman relationship has always remained strong and has witnessed significant positive developments following the visit of Prime Minister Narendra Modi to Oman in February 2018 at the invitation of late His Majesty Sultan Qaboos bin Said. The strength and resilience of our relationship was evident during the COVID period when both countries supported each-other closely to address the challenges.
“There is a strong desire at both people-to-people as well as leadership level to further strengthen our partnership,” he said.