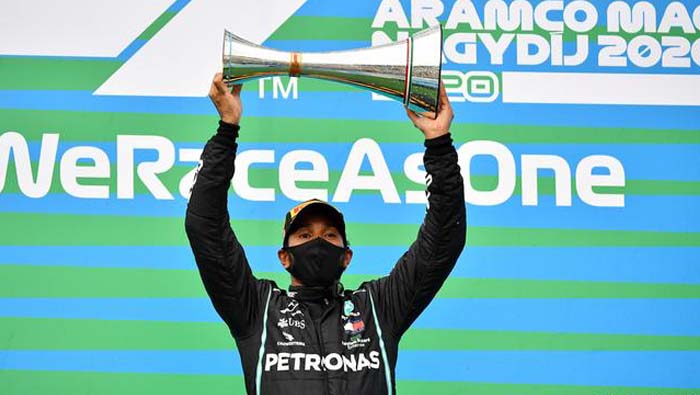 Budapest: Mercedes driver Lewis Hamilton took his second win of the 2020 Formula 1 season, and also his eighth victory at the Hungarian Grand Prix on Sunday.
With a time of one hour 36 minutes and 12.7473 seconds, the defending champion and six-time world champion beat Dutchman Max Verstappen (+8.702) of Red Bull Racing, and Finnish racer Valtteri Bottas (+9.452.433) of Mercedes, who finished second and third respectively in the 35th edition of the Hungarian GP.
The 35-year-old Briton equalled legendary German driver Michael Schumacher's record for number of wins at a single venue.
Hamilton took the lead in the driver's standings with 63 points, followed by Valtteri Bottas (58 points) and Max Verstappen (33 points).
While in the constructor's standings, Mercedes is at the top with 121 points, followed by Red Bull Racing-Honda (55 points) and McLaren-Renault (40 points).
With rain having fallen earlier in the day and pockets of standing water still on the circuit, Verstappen locked a wheel and slid into the barriers before the race had even started.
Though it appeared as if his Red Bull had sustained too much damage to race, a superhuman effort from his mechanics meant the Dutchman was able to take the start with seconds to spare.
But the wet conditions at the start proved to be a false dawn as the track quickly dried, and with further rain ultimately failing to appear, all the drivers had come in to swap their intermediate tyres for slick ones by lap 6.
Even by this early stage of the race, Hamilton took-off smoothly, leaving the turmoil behind him, setting the order with Hamilton, Lance Stroll, and Verstappen, while Bottas had a poor start, and began the race from 7th
Lap 7 saw a return to the original order for the first 10 racers: Hamilton, Verstappen, Kevin Magnussen, Stroll, Romain Grosjean, Charles Leclerc, Bottas, Sebastian Vettel, Alexander Albon, and Sergio Perez.
Hamilton's lead ahead of Verstappen grew to 9 seconds and the defending champion remained cool and in control at the forefront without any real challengers. The true competition was not between the first and second places, but rather between the 3-4 and 5-6.
Around lap 25, the Mercedes world champion recorded better and better laps consecutively, increasing his advantage to 12 seconds ahead of Versteppen.
Around the middle of race, at lap 37, the majority of the competitors were already beyond their second wheel change. Hamilton remained in the lead, with Verstappen tailing him, but Bottas came up to third position after taking over Stroll very smoothly during the wheel change. Behind Stroll were Ricciardo and Sianz.
Driving in a Mercedes sandwich, Vestappen rolled on hard tires, whereas the two drivers of the world champion team used medium rubbers.
In lap 57, the pace of the defending world champion Hamilton was incredible.
Six laps later, Hamilton was called for a pit stop to change for soft tires, but the pilot remained on the track. His advantage over Verstappen grew to 26 seconds meaning he could change the tires without losing his position in a wheel change.
In the penultimate lap, Hamilton secured the fastest lap, accelerating to 1:17,497. This meant he could close the race with 26 points and take the lead in the World Championship points race.
The race was held behind closed gates due to the novel coronavirus pandemic.