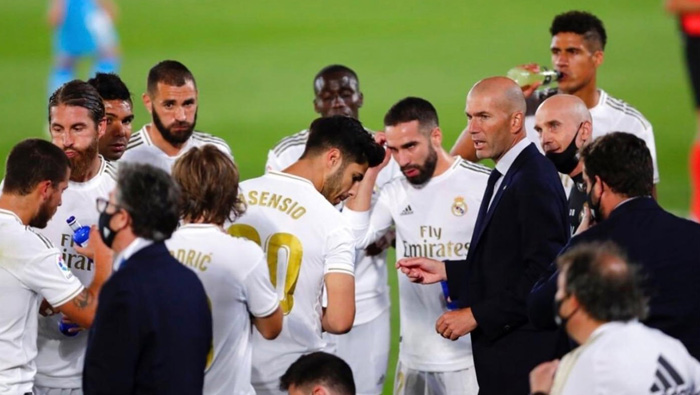 Madrid: The 37th and penultimate round of matches in La Liga will see Real Madrid crowned as champions if they win at home to Villarreal, while the questions of who will play in Europe next season and who drops into the second division could also be answered.
Real Madrid's 2-1 win at home to Granada on Monday night means that a home win against fifth-placed Villarreal will not only give them ten consecutive wins, but mean that FC Barcelona, who are four points behind in the table, can't catch them.
Madrid coach Zinedine Zidane will not make many changes to the team that won in Granada with Ferland Mendy at left-back, Sergio Ramos and Raphael Varane in central defence and Karim Benzema leading the Madrid attack.
Villarreal's home defeat to Real Sociedad in their last game ended their hopes of qualifying for the Champions League, but they have probably done enough to assure a place in the Europa League, although they need a point to be mathematically secure.
In anticipation of getting the result they need, Madrid issued a communique on Wednesday asking fans not to gather at the Plaza de Cibeles in the Spanish capital, where they traditionally celebrate titles. The club stressed the need to avoid mass gatherings of supporters to avoid the risk of new COVID-19 infections.
FC Barcelona go into their home game against mid-table Osasuna knowing that anything other than a win would also assure the title for Real Madrid, although it seems that the Barca players have all but given up on the league and begun to think about the Champions League after Luis Suarez commented in an interview published on Tuesday that "we let the title slip away ourselves".
Atletico Madrid and Sevilla have both assured places in next season's Champions League, but both still have a lot to say in who will qualify for the Europa League.
Atletico make a short trip to sixth-placed Getafe, who hold a three-point cushion over Athletic Bilbao currently in eighth place and just outside the European places.
Sevilla, meanwhile, travel to play seventh-placed Real Sociedad, who finally returned to form with a 2-1 win in Villarreal on Monday. The team from San Sebastian also have a three-point cushion over Athletic and are four points ahead of Valencia and Granada, who both keep their slim European hopes intact.
Athletic play at home to Leganes who are four points from safety and will be relegated if they lose in the San Mames Stadium. Leganes travel with seven players out injured and knowing they will go down anyway if Celta Vigo win at home to Levante or Alaves take three points from their visit to Real Betis.
Mallorca are in a similar situation as Leganes, needing to win at home to Granada, while hoping at the same time that Alaves and Celta fail to win.
Finally, Valencia will expect all three points from rock-bottom Espanyol, despite a poor atmosphere at the club after the news was leaked that midfielders Dani Parejo, Geoffrey Kondogbia and Francis Coquelin were told hours before Valencia's recent defeat in Leganes that they were not wanted at the club next season