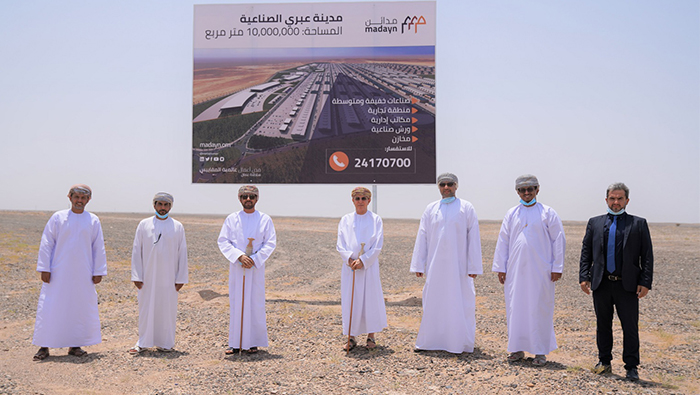 Muscat: The Public Establishment for Industrial Estates – Madayn has officially begun the establishment of Ibri Industrial City in the Wilayat of Ibri in Al Dhahirah Governorate on a total area of 10 million square metres.
Work is currently underway to develop the master plan of Ibri Industrial City through the appointed consultancy company.
The detailed design work and tender documents for the implementation of phase one are expected to be completed in the coming period. This will include infrastructure and service works, industrial workshops and basic facilities.
Located on the road leading to the border between the Sultanate and the sisterly Kingdom of Saudi Arabia, the new industrial city will include a variety of industrial, commercial and service activities such as light and medium industries, commercial area, administrative offices, industrial workshops and warehouses.
Sheikh Saif bin Hamiar Al Malik Al-Shihi, Governor of A’Dhahirah, emphasised that Ibri Industrial City comes at an ideal time to create an integrated environment for the industrial sector is in the governorate in particular and the Sultanate in general.
“The governorate embraces several economic activities especially those related to marble and chrome industries. Therefore, Ibri Industrial City will play an important role in advancing such activities and support the national economy,” Al Shehhi said, adding, “Moreover, the industrial city will generate job opportunities for the national cadres and provide an ideal environment for the private sector to carry out various industrial, commercial and service activities in an integrated industrial city.”
Hilal bin Hamad Al-Hasani, CEO of Madayn, stated that the establishment of Ibri Industrial City incomes as a continuation of the efforts of the Sultanate’s government to boost economic development in the various governorates in Oman, and also comes along the lines of the national priorities of Oman 2040 vision.
He added that the new industrial city also aims at achieving the objectives of Madayn, which include attracting foreign investments to the Sultanate and localising the national capital; contributing to stimulating the private sector to achieve sustainable economic and social development; achieving environmental sustainability, and contributing to the creation of new job opportunities for the national cadres.
Al Hasani stressed that Madayn is committed to achieving its vision in enhancing the Sultanate’s position as a leading regional centre of manufacturing, ICT, innovation and entrepreneurship excellence, and its mission in attracting industrial investments and providing continued support, through regionally and globally competitive strategies, good infrastructure, value-adding services, and easy governmental processes.
Saif bin Said Al-Badi, member of OCCI Board of Directors and Head of OCCI Branch in A’Dhahirah, pointed out that the industrial cities that fall under the umbrella of Madayn, represent economic tributaries of the governorates in which they are located.
“These industrial cities contribute to the boost of the economy in the Sultanate by attracting local and foreign investments. They also contribute to providing opportunities for small and medium enterprises and entrepreneurs and hence creating direct and indirect job opportunities. The construction of Ibri Industrial City is expected to begin soon, and shall contribute to achieving a qualitative leap in economic and commercial aspects, and manufacturing industries,” Al Badi commented.
It should be noted that Al Rusayl Industrial City represents the beginning of the Sultanate’s industrial march in 1983 under the name of Rusayl Industrial Estate Authority. In 1993, Madayn was established to ensure continued success and development. Today, Madayn manages and operates eight industrial cities in Suhar, Raysut, Nizwa, Sur, Al Buraimi, Al Rusayl, Samail and Ibri in addition to the Knowledge Oasis Muscat and Al Mazunah Free Zone.
Madayn also offers many value-adding initiatives. In 2010, the Industrial Innovation Centre (IIC) was initiated at Al Rusayl Industrial City to support scientific innovation and research. Madayn also launched the National Business Centre (NBC) in 2013 to act as an incubator for the Omani SMEs by offering them a platform to advance their business ideas and develop them into growing ventures. Besides, Madayn promotes locally manufactured products in the Sultanate and abroad through ‘Made in Oman’ campaign.
In 2019, Madayn Industrial Academy was established to provide training opportunities for the national cadres to enhance their administrative, financial and technical skills.