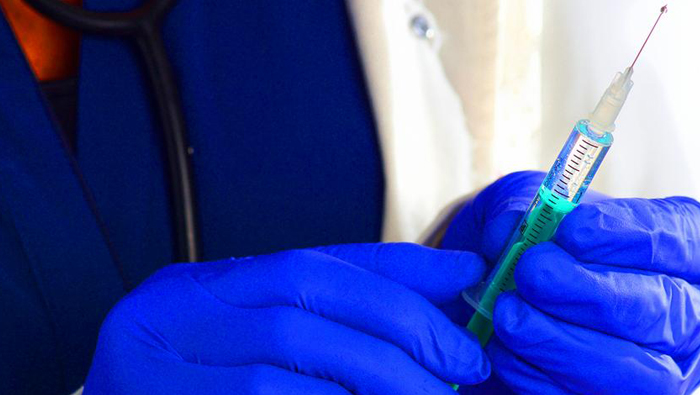 Frankfurt: Michael Piontek takes off his gray blazer, dons a white lab coat and strides through bright rooms on his way to the appliance that has become the heart of his lab at ARTES Biotechnology: a refrigerator full of Petri dishes containing the culture that he believes will lead to a vaccine for the coronavirus. Right now, the yeast is protected by a guard and security cameras.
"This is our treasure," says Piontek, a 60-year-old microbiologist. "We put all our know-how into it. This here is enough to start production around the world."
Piontek and his 25 colleagues have been working on a coronavirus vaccine since April, but the scientist has researched yeast cells since his university days. Based in Langenfeld in the German state of North Rhine-Westphalia, ARTES Biotechnology has already used yeast cells to bring a hepatitis B vaccine to market. The cultures help ARTES produce proteins that could be used to trigger the production of coronavirus antibodies in humans.
Global race
Bringing a vaccine to market is a process that usually lasts five to 10 years. However, some companies have claimed that they will produce a vaccine by the end of 2020. Piontek says that's very optimistic. He plans to first test his company's vaccine on nonhuman animals this summer and potentially start the human clinical trials by the end of the year. ARTES is already lining up partners for that phase of testing. "There is a market out there with almost 8 billion people in it, Piontek says. "It's enormous. A lot of different companies with a lot of different approaches will be needed to meet that kind of demand."
Mainz-based BioNTech has already begun human clinical trials, the first phase of testing. The German Association of Research-based Pharmaceutical Companies informed DW that CureVac, in Tübingen, would also begin phase one testing in June.
There are about 150 vaccine projects underway around the globe. Based in Tianjin, China, CanSino Biologics is one of the companies farthest along at this point. CanSinoBio has already moved on to phase two: trials to test a vaccine's ability to trigger immune systems while researchers monitor subjects for adverse side effects. Phase three tests a larger group of people. It is in phases two and three that vaccine development projects start devouring cash. Once those are completed, vaccines are brought to market.
The general director of the International Federation of Pharmaceutical Manufacturers and Associations, Thomas Cueni, told a recent press conference that the IFPMA is "fully committed to its goal to accelerate development, production and equitable access to safe, effective and affordable COVID-19 vaccines."
The statement implies that the lobbyist and his organisation have heard calls from world leaders who have demanded that vaccines be treated as a public good. At the moment, a number of companies have come together to cooperate in a World Health Organization forum designed to speed research.
A collaborative effort?
In early May, governments, organisations and individuals donated about €7.4 billion ($8.4 billion) to the WHO project. Recently, Gavi, the Vaccine Alliance — a public-private partnership founded by the Bill and Melinda Gates Foundation — organised a conference of international donors that raised €7.8 billion for the funding of non-COVID projects. The European Commission now intends to sign preliminary contracts with a number of pharmaceutical companies to ensure that EU citizens have quick access to adequate supplies of vaccine when it arrives. Payment is to be largely facilitated by an EU emergency funding mechanism with a €2.7 billion budget.
Jörg Schaaber, of the independent market watchdog group BUKO Pharma-Kampagne, says companies that accept public money for vaccine research are therefore agreeing to develop an affordable product. Schaaber fears that the promises made by the companies will ultimately prove empty.
"If the industry wants to follow its words with deeds, then companies must make their patents accessible in the international Medicine Patent Pool," Schaab says. The MPP system has made generic medicine available for viruses such as HIV.
'Protein we need'
ARTES does not produce its own vaccines. Rather, it makes its money by selling manufacturing licenses. Piontek says the company did not need government financial assistance for its coronavirus research, but adds that "we'll have to make sure we recoup costs on our investment."
Downstairs at ARTES there is a sweet smell in the air. This is where the stock of what Piontek calls "the culture" is brewed in steel and glass beakers and flasks. Piontek says that in four to five days his company can grow up to 1.5 kilograms (3.3 pounds) of genetically modified yeast from 15 litres (4 gallons) of stock. "With that, we can produce 1.5 grams (0.05 ounce) of the protein we need," he says.
Piontek says that could be enough to produce as many as 100,000 doses of vaccine. The hepatitis B vaccine made by ARTES is currently being produced in the United States, India, Indonesia, Thailand and Vietnam. Piontek says factories in those countries could easily shift to the production of coronavirus vaccine.
Regulatory approval is a long way off, and companies will have to contend with lots of financial risks. "If our idea works, we'll be in the race again next time we need a new vaccine," Piontek says. "We will always need a new vaccine," he adds.