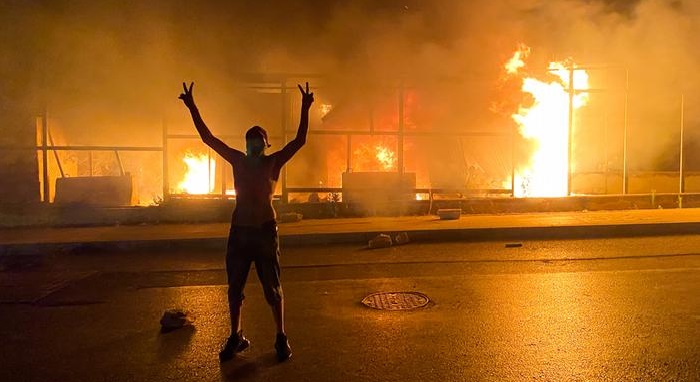 Hundreds of protesters rallied in Beirut on Saturday against the government and its response to the worst economic crisis Lebanon has seen since the end of its brutal civil war in 1990.

"This current government proved to be a failure. We want a new government," said Lebanese activist Neemat Badreddin. "We want stability and we want to be able to live without begging or without people having to migrate."

Last year, former Prime Minister Saad Hariri resigned under pressure from anti-government protests against political elites, who are widely viewed as corrupt and responsible for plunging the country into its economic crisis.

A new government led by Prime Minister Hassan Diab has failed to materialize economic progress. Even talks with the International Monetary Fund to unlock billions of dollars has failed to gain traction.

Meanwhile, the Lebanese pound has depreciated to historic levels, plunging to 6,000 Lebanese pounds to the US dollar on Friday, down from the official 1,507-pound peg put in place during the 1990s.

The depreciation has significantly increased the cost of living for those residing in Lebanon, including more than 1 million Syrian refugees. Restrictions on mobility and gatherings to curb the novel coronavirus have further dented Lebanon's aspirations for an economic recovery.

Diab on Friday condemned rioting, accusing unnamed forces of attempting to mount a "coup" against his government.

"Some have tried to exploit the situation again," said Diab. "They have thrown lies and rumors, have contributed to deepening the Lebanese pound crisis, have caused a major crisis and have pushed people onto the streets."

The government said it would inject US dollars into the economy in a bid to prop up the Lebanese pound. But protesters largely agree that such efforts aren't enough to tackle the widening fallout of the economic crisis.

"We don't believe all the measures taken by the government to improve the dollar exchange rate," said a protester in Tripoli. "I just want a job so I can live."