NASA, SpaceX launch first crewed mission from US soil since 2011 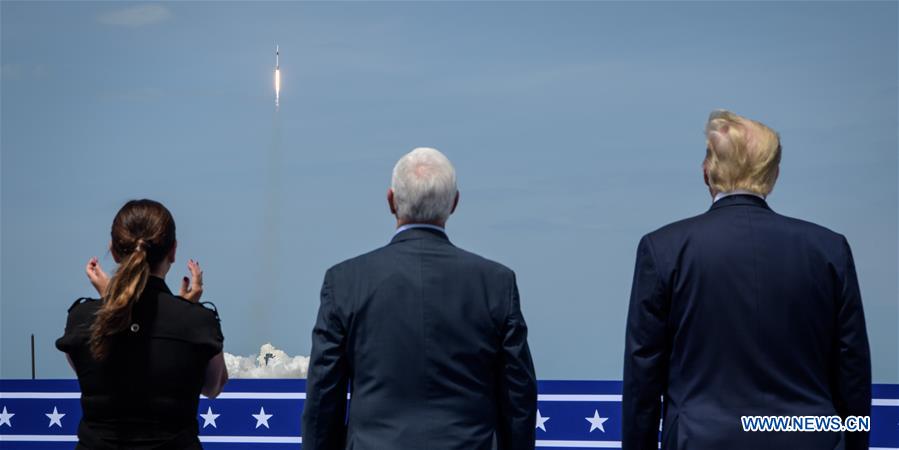 WASHINGTON: Two NASA astronauts took off from US soil on Saturday, riding aboard SpaceX's Crew Dragon spacecraft in a historic test flight to the International Space Station (ISS).

The mission, dubbed Demo-2, is the first crewed launch to orbit from U.S. soil since NASA's shuttle program ended in 2011, and also the first-ever manned space launch by a private company, ushering in a new era of U.S. space exploration.

The Crew Dragon spacecraft lifted off on a SpaceX Falcon 9 rocket at 3:22 p.m. Eastern Time, from historic Launch Complex 39A at the Kennedy Space Center. Veteran NASA astronauts Bob Behnken and Doug Hurley are co-commanders on the mission.

Launch Complex 39A has served as backdrops for America's most significant manned space flight endeavors, including Apollo 8, Apollo 11 and Space Shuttle Columbia.

"It's incredible, the technology, the power. I'm so proud of the people at NASA, all the people that worked together, public and private. When you see a sight like that it's incredible," Trump said after the launch at the space center.

Pence said none of this would have been possible without the personal courage and the unflinching skill of the two American astronauts.

NASA Administrator Jim Bridenstine tweeted, "For the first time in 9 years, we have now launched American astronauts on American rockets from American soil. I'm so proud of the NASA and SpaceX team for making this moment possible."

NASA confirmed main engine cutoff and separation of the rocket's first and second stages minutes after the lift-off.

Falcon 9's reusable first stage booster has successfully landed on the "Of Course I Still Love You" drone ship off the Florida coast.

The Crew Dragon reached Earth orbit about 12 minutes after takeoff, and is making its way to the ISS, according to NASA.

After successfully docking, Behnken and Hurley will be welcomed aboard station and will become members of the Expedition 63 crew. They will perform tests on Crew Dragon in addition to conducting research and other tasks with the space station crew.

The mission will conclude with the Crew Dragon undocking from the station, deorbiting, and returning Behnken and Hurley to Earth with a safe splashdown in the Atlantic Ocean, according to NASA.

The mission duration has not been announced yet. NASA said it will be determined once on station based on the readiness of the next commercial crew launch.

Behnken and Hurley were among the first astronauts to begin working and training on SpaceX's next-generation human space vehicle, and were selected for their extensive test pilot and flight experience, including several missions on the space shuttle, according to NASA.

Behnken will be the joint operations commander for the mission, responsible for activities such as rendezvous, docking and undocking, as well as Demo-2 activities while the spacecraft is docked to the ISS.

Hurley will be the spacecraft commander for the mission, responsible for activities such as launch, landing and recovery.

It is the first-ever crewed mission for SpaceX since its founding 18 years ago, and the first time ever that a privately developed spacecraft launched humans into Earth's orbit.

Since the final flight of NASA's space shuttle program in July 2011, the space agency has relied on Russian Soyuz rockets and spacecraft to get its astronauts to and from the ISS. Since then, NASA, SpaceX and Boeing have been working for years to end that dependence.

In 2014, the two companies signed multibillion-dollar contracts with NASA's Commercial Crew Program to finish development of their astronaut taxis and fly six operational crewed missions to and from the orbiting lab.

The Crew Dragon has reached the ISS once before, on the uncrewed Demo-1 mission in March 2019. Demo-2 is the first orbital human mission to launch from the United States.

This is SpaceX's final test flight for NASA's Commercial Crew Program and will provide critical data on the performance of the Falcon 9 rocket, Crew Dragon spacecraft, and ground systems, as well as in-orbit, docking and landing operations.

The test flight also will provide valuable data toward certification of SpaceX's crew transportation system for regular flights carrying astronauts to and from the space station.

SpaceX currently is readying the hardware for the first space station crew rotational mission, which would happen after data from this test flight is reviewed for certification, according to NASA.