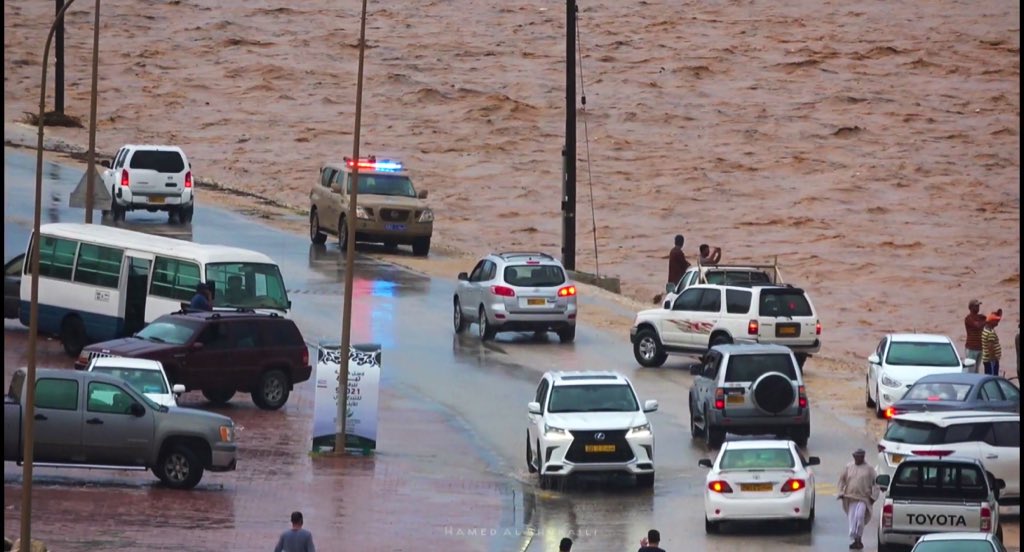 Salalah: Public and emergency services in the Dhofar governorate are working hard to contain the impact of rains caused by the current low pressure situation over the region. Teams are out on the roads to ensure they remain clear of debris, people are safe in their homes, and services continue uninterrupted across the various wilayats in Dhofar.
At least three people have died due to floods caused by heavy rains in Dhofar region, while search and rescue parties continue to respond to distress calls across the governorate.
Teams from the Royal Oman Police (ROP) and Public Authority for Civil Defence and Ambulance (PACDA) have rescued several locals and expats who’ve been caught in the torrential rain that has rapidly filled up wadis and caused flash floods. The police issued a warning asking everyone to stay at home until the rough weather subsides.
The Royal Oman Police said in a statement: “two citizens are reported to have been swept away in the Arzat region, in Salalah, the body of one of them was found, while the search for the other is still ongoing,” with the ROP later adding: “The missing citizen was found yesterday after being swept away in the valley of Arzat.”
“Dear citizen/resident, your staying at home during the climatic period in Dhofar Governorate is the best way to avoid risks. We wish you safety,” said a statement from the ROP, as PACDA added: “Do not cross the wadis even if the water level is low.”
The Sultanate’s Public Authority for Civil Aviation (PACA) provided a breakdown of the rainfall received across the Dhofar governorate. "The tropical condition has resulted in 100-200 mm of rain in Dhofar, which is associated with fresh, strong winds accompanied by flooding over low-lying and coastal areas, and an increased in the flow of water in wadis, with a reduction in horizontal visibility.”
“The amount of rain recorded in some of the meteorological stations of the authority are as follows: Wilayat of Taqah recorded 178.2 mm of rain, Wilayat of Mirbat recorded 163 mm of rain, Wilayat of Salalah has seen 154.6 mm of rain, Sadah has recorded 135.2 mm of rain, Qairoon Akeata has 110 mm of rain, and Wilayat of Dhalkut recorded 42.2mm of rain."
Speaking exclusively to Times of Oman, an official from the transport sector in Salalah said that efforts were being made to make sure all the major roads leading to the governorate remained open to traffic.
“There was an interruption on the Salalah - Thumrait road, but that road has now been opened. Likewise, there was an interruption to the Al-Maamoura - Taqa road. We had recorded rock fall on the Hadban – Hasik road, and a bulldozer was deployed there to clear the debris. That road has now been cleared.”
However, the ongoing weather meant it was likely that more occurrences of roads being temporarily blocked would continue. On Saturday afternoon, the Royal Oman Police announced that water overflowing from wadis had halted traffic from both directions on the Thumrait – Al Mazyona road, while runoff from Wadi Dhahban had interrupted traffic on the Thumrait – Marmul road.
Yasser Abdullah Al Shanfari, the operations manager at the Salalah Sewerage Services Company, said Salalah’s sewage system had to deal with half a million cubic metres of water in a 48-hour span. “The emergency plan for dealing with such situations has been activated. The sewage system for the city of Salalah has been working at maximum capacity to deal with the large volume of water caused due to the rainwater discharged into the system. The volume of water dealt with by the system during the past 48 hours has exceeded 500,000 cubic metres."
“The emergency lines running to the sea have been activated, and emergency pumps were deployed at the main pumping stations to deal with the flow of water,” he said. “The system is still running without interruption. We call on people not to open manhole covers, because they are dangerous for them, and will harm the system."
Oman’s Telecommunications Regulatory Authority also added that telephone services had been interrupted in some areas of the region, but connectivity has since been restored.
“The fixed and mobile lines of communication are working normally, but there have been some interruptions to mobile communications stations in Salalah, Taqa and Mirbat,” said the organisation. “They are being serviced. Electricity has been cut off to some stations as a precaution, and power will be restored and mobile telecommunications stations will be restarted whenever it is confirmed there are no risks of water entering these stations."