ROP gets tough against violators this Eid 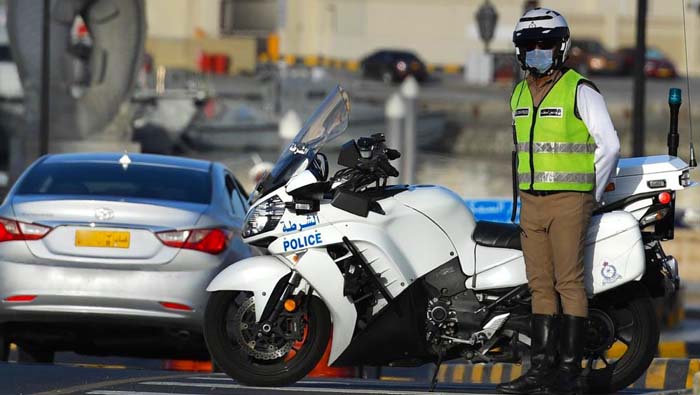 Muscat: Police units all across Oman were busy this Eid, as they made sure people followed the new directives that had been put in place last week, to stop the spread of COVID-19 in the Sultanate.
The Royal Oman Police – in keeping with the guidelines issued by the Supreme Committee to deal with COVID-19 – issued about eight new orders last week, with many people booked and fined for violating these new regulations over the Eid holidays.
People across Oman’s 11 governorates were booked for not wearing masks while outdoors, as well as assembling in large gatherings in public, which are now prohibited.
In Muscat, 40 expatriates were booked after they gathered to offer Eid prayers at the Ghala Industrial Area, while 13 more were decreed when they assembled on the roof of a building in Al Khoudh. Another 34 expatriates were booked for the same reason after they were caught playing cricket in Al Ansab area.
“The Muscat Governorate Police Command booked 34 expatriates on charges of gathering in public and playing cricket in Al Ansab, violating the decisions of the Supreme Committee tasked to deal with COVID-19, with administrative fines being issued against them,” said a police statement.
In North Al Sharqiyah, a group of people were arrested for illegally grilling camel meat in Sinaw, while over 49 expats were booked on the charge of gathering at a public place in Al Dakhilyah.
“Al Batinah North Governorate Police Headquarters arrested three expatriates for selling clothes, one expatriate for organising tailoring activities, two expatriates for running a laundry service, and an expatriate for undertaking barbershop activities,” added a statement from the ROP.
“Two violation notices have been issued for non-compliance with the measures and conditions of activities permitted. Both establishments have been ordered to close for a period of one month.”
Under the new directives of the Royal Oman Police, locals and expats who do not attend COVID-screening tests if required to do so will have to pay a fine of OMR200, with that fine being doubled in the case of repeat offenders. A fine of the same amount needs to be paid by those who’ve violated the conditions of their institutional or home quarantine.
“Failure to close down tourist sites, stores, clubs, health/sports facilities and barber shops as well as men’s and ladies’ saloons is a violation of the decisions of the Supreme Committee,” added the ROP. “Violators shall be subject to an administrative fine of OMR3,000. In case of repetition, that fine shall be doubled.”
The police went on to add: “Inviting individuals to gatherings, including Eid, celebrations and funeral gatherings in public areas is a violation of the decisions of the Supreme Committee. Violators shall be subject to an administrative fine of OMR1,500. In case of repetition, that fine shall be doubled.”
Similarly, all those found guilty of participating in such gatherings must pay a fine of OMR100, with repeat offenders required to pay double that amount, while those who do not wear masks in public places will be fined OMR20, which will again be doubled for those who’ve broken this rule previously.
Locals and expats who’ve been provided a tracking bracelet after their entry into a quarantine centre will be fined OMR300 – an amount that will be doubled if repeated – if they’re found to have destroyed or removed them. Violators of these laws may see criminal action taken against them, and the Royal Oman Police is within its rights to detain those who refuse to regard these laws for up to 48 hours, although this may be extended under the orders of the Public Prosecution service.