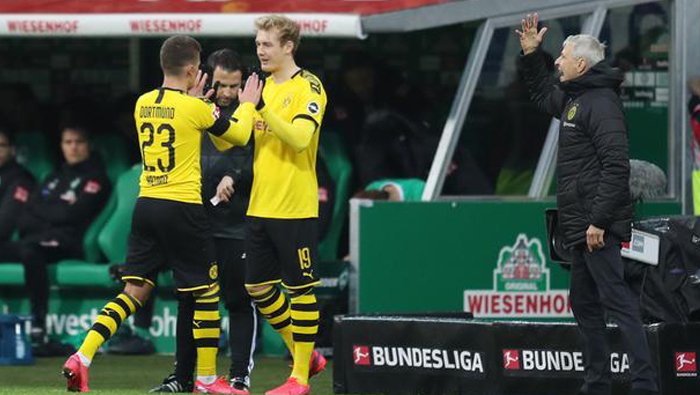 Berlin: German mass-circulation newspaper Bild has placed a clock on its homepage which shows, down to the second, how much time remains until the Bundesliga kicks off again on May 16. The clubs have started team training after a period in which they were initially training separately before moving in to small groups.
The first team to move into their living quarters for the prescribed quarantine period were Cologne, who checked into a downtown hotel in the city on Thursday evening. Sixteen other teams are to check into their hotels this weekend in order to be virus-free by next weekend. RB Leipzig have taken a different path and will isolate themselves from the outside world at the club's academy.
Since Germany's political leadership gave the green light for a resumption of play behind closed doors, the discussion about the health risk for the players has continued, and it's not only about the risk of contracting the coronavirus. Some have warned about the danger of players returning to competition with just one week of intense training could put them at an increased risk of injury. On Thursday, as he unveiled plans for the Bundesliga to restart, DFL (German Football League) CEO Christian Seifert raised the possibility of allowing five instead of three players substitutions per match until the end of the season.
Still only three interruptions
And just a day later, the International Football Association Board (IFAB), the guardians of the rules of the game, approved a proposal put forward by FIFA meant to "protect player welfare."
In order to avoid an increase in disruptions to the the flow of the game, "each team will only have three opportunities to make substitutions; substitutions may also be made at half-time," FIFA said in a statement announcing the temporary rule change.
This applies with immediate effect to all competitions that are scheduled to conclude by December 31.
La Liga to restart in June?
The Royal Spanish Football Federation (RFEF) had also called for five substitutions to be allowed when play resumes. No plans to restart La Liga have been officially announced just yet, although Javier Aguirre of the first division club CD Leganes has told an online football site in his native Mexico that the first of 11 rounds of games needed to complete the season are to be played on June 20.