Bundesliga: What are coaches doing during the coronavirus? 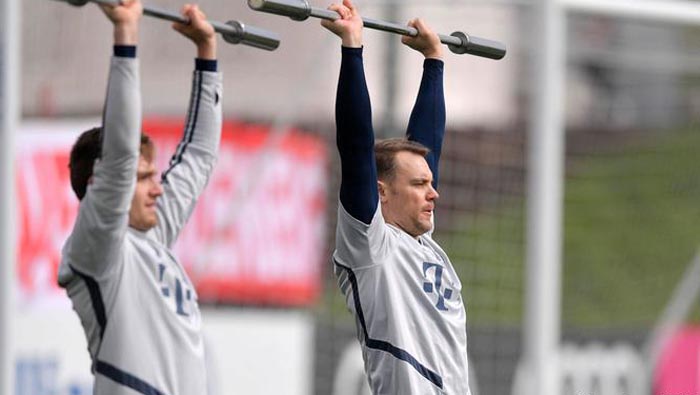 Berlin: With the Bundesliga scrambling to find a way to somehow play out the season as a financial crisis swells, many players are not only finding ways to stay mentally sharp but also physically fit by taking part in virtual training sessions or self-designed routines in their homes or gardens.
For coaches though, this time is a trying in a different way. That closeness to a team, fellow coaches or club staff members is absent. With no games and limited numbers in training, the usual structure of a week is gone. Everything is different.
For the 24 coaches currently studying to become Fußball-Lehrer, Germany’s top football coaching qualification, that is also true. Having spent months studying, and with only the exams left to do, the chance to finish one of the most prestigious football coaching courses in the world remains just beyond their reach.
Daniel Niedzkowski, the German FA’s (DFB) chief instructor, has been working hard with his staff to keep the feeling of the group strong. Now, the current class has a video conference once a week, access to a digital campus where training sessions can be uploaded and critiqued, and share resources through a digital channel designed to spark ideas. There are also plans for a podcast with professional coaches answering the questions of those on the course.
Unprecedented situations often expedite change, and the DFB’s plans to have more of the coaching course online have started to grow. With the next course due to start in June, there is hope that the virtual space can become more of a home.
While there is no replacing real face time with FaceTime, Niedzkowski feels working with video calls has helped him become more efficient with his time, conversations are clearer. It has also become evident how valuable it is to see someone during a conversation rather than just talking with them over the phone.
The most important thing at the moment for everyone, and not just football coaches, is connection.
"Don’t lose contact with players," Niedzkowski said. "Don’t just wait. Stay active and look for the conversations. This is also a chance to talk about topics other than only football."
One man who has no problem delving into other worlds is Ismail Atalan. Around a week after being appointed head coach of third-division side Hallescher FC, Atalan suddenly found himself living in a different world. Atalan, the man behind Sportfreunde Lotte’s famous German Cup run back in the 2016-17 season, was excited to be in the job. Suddenly having to adjust to social distancing as a new head coach, however, makes an already tough task even harder. Now, Atalan spends a lot of time talking on the phone, which he admits he finds difficult given how much he enjoys the face-to-face aspect of the job.
Despite the calls to players, staff and club members, the virtual sessions, the chance to scout potential signings, and the Marcelo Bielsa training sessions he has watched on YouTube, Atalan just misses being out on the training ground. That feeling is harder to handle given that there remains a great deal of uncertainty about how things will continue.
Nevertheless, this has meant more time with his family and a chance to think of something other than football. Atalan admits he loves a good 'whodunit' because it allows his mind to be free of football for a moment. "As a football coach you’re so focused on tactics and other things that this time can allow for an open mind," Atalan says. “It’s important to balance it and not focus too much on football."