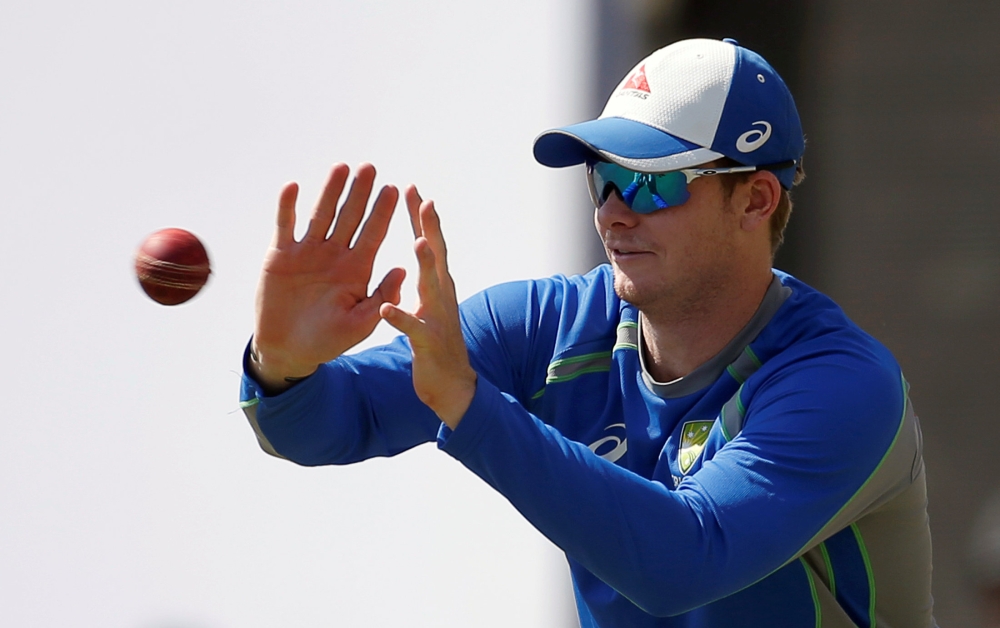 Ranchi: Captain Steve Smith led Australia's revival with an unbeaten 80 on Thursday to take his team to 194 for four at tea on the opening day, signalling he has put the review controversy at Bengaluru behind him.
The 27-year-old, the lone centurion in the spinner-dominated four-test series, hit nine boundaries and featured in a second 50-plus partnership with Glenn Maxwell who was batting on 19 in his first test since late 2014.
Home captain Virat Kohli injured his shoulder while diving to save a boundary and headed off the ground for treatment.
Australia squandered a brisk start and slumped to 89-3 before Smith raised 51 runs with Peter Handscomb, another protagonist of the review controversy in the second test, to prop up the innings.
Handscomb had advised Smith to gesture towards the dressing room in Bengaluru for advice on whether to review a leg before wicket decision, a move that drew explosive response from India captain Virat Kohli.
The teams have promised to put the acrimony behind them and focus on the four-match series which remains level on 1-1 after India's 75-run victory in the Bengaluru slugfest.
Smith won an important toss and had little hesitation in batting first, something of a ritual on India's low-bounce tracks, and Matt Renshaw led their brisk scoring with his boundary binge.
With an extremely fast outfield at the Jharkhand State Cricket Association (JSCA) Stadium hosting its first test match, Renshaw's first 24 runs came all via boundaries as the tourists cruised to the 50-run mark in the 10th over.
Kohli introduced spin spearhead Ravichandran Ashwin in the seventh over after the first six yielded only a half-hearted leg-before appeal by Ishant Sharma against Renshaw.
Ashwin's spin partner Ravindra Jadeja got the breakthrough in his first over when David Warner slapped a juicy full toss back to the bowler to depart for 19.
Renshaw looked good for his third fifty in the series before edging Umesh Yadav in the slip having played and survived an identical shot on the previous delivery. Renshaw's fluent 44 included seven elegant boundaries.
Ashwin, now the leading wicket-taker in the series, tasted success when he got Shaun Marsh caught at short leg after Kohli successfully reviewed the original not-out decision.
Smith and Handscomb (19) steadied the innings before Yadav struck again, trapping the latter lbw with an inswinging yorker.
Australia brought in paceman Pat Cummins, who is playing his second test after more than five years in the wilderness, and Maxwell to replace the injured duo of Mitchell Starc and Mitchell Marsh.
India welcomed back opener Murali Vijay, who missed the tempestuous Bengaluru test with a shoulder injury.