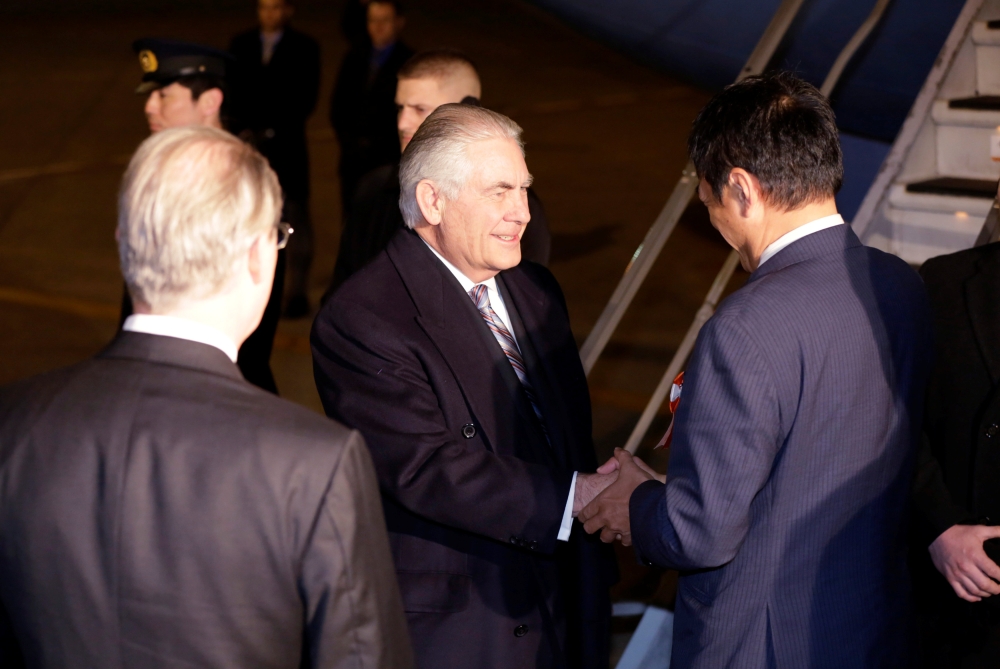 Tokyo: U.S. Secretary of State Rex Tillerson said on Thursday that the escalating threat from North Korea's nuclear program showed a clear need for a "new approach," although he stopped short of detailing what steps the Trump administration will pursue.
Tillerson was speaking at a news conference following talks with Japanese Foreign Minister Fumio Kishida in Tokyo, the start of his first trip to Asia as secretary of state. It was the first time Tillerson has taken questions from the media since he took office in early February.
Two decades of diplomatic and other efforts, including aid given to North Korea by the United States, had failed to achieve the goal of denuclearising Pyongyang, Tillerson said.
"So we have 20 years of failed approach," Tillerson said. "That includes a period where the United States has provided $1.35 billion in assistance to North Korea as an encouragement to take a different pathway."
He added: "In the face of this ever-escalating threat, it is clear that a different approach is required. Part of the purpose of my visit to the region is to exchange views on a new approach."
Japan is seeking clues to Washington's policies on a volatile North Korea and a rising China while hoping to steer clear of trade rows during Tillerson's visit.
U.S. President Donald Trump made it a hallmark of his presidential campaign to call on U.S. allies, including Japan, to pay more for hosting U.S. forces and other elements of U.S. protection.
During the joint news conference with Kishida, Tillerson said that the United States welcomes an increased Japanese commitment to its "roles and responsibilities" within its alliance with the United States.
"A new stage"
Tillerson, a former oil executive with no prior diplomatic experience, will travel to South Korea and China later in the week. On this trip, he needs to reassure Tokyo and Seoul about countering North Korea's growing nuclear prowess, and press China to do more on one of the most serious security threats facing Trump.
"We look to China to fulfil its obligations and fully implement the sanctions called for" in United Nations resolutions, Tillerson said in response to a question about how it will get China on the same page as the United States when it comes to North Korea.
North Korea last week launched four more ballistic missiles and is working to develop nuclear-tipped missiles that can reach the United States.
Washington has previously said all options, including military, are on the table in its review of policies toward North Korea and Japanese officials are keen to know more details. In the final months of the Obama administration, U.S. officials warned China it would blacklist Chinese companies and banks that do illicit business with North Korea, if Beijing failed to enforce United Nations sanctions against Pyongyang.
Japan has a pacifist constitution but influential lawmakers have been pushing for the country to develop the ability to counter Pyongyang's military advances.
Tokyo is also considering beefing up its ballistic missile defences with a U.S. Terminal High Altitude Area Defense (THAAD) anti-missile system or Aegis Ashore, a land-based version of the missile defence system used at sea.
China's assertiveness in the East China Sea, where it has a territorial row with Japan, and the South China Sea, where it has disputes with the Philippines and several other Southeast Asian nations, will also be on the agenda during Tillerson's visit as will trade.
Trump administration trade adviser Peter Navarro cited Japan on Monday for non-tariff trade barriers and said Washington must use its leverage as the world's largest market to boost U.S. exports.
Some Japanese officials, though, say trade will take a back seat to security. "We have more key issues of common concern, like North Korea," one official said, declining to be identified because he was not authorised to speak to media.
"Japan recognises threats from North Korea's provocations have entered a new stage," Kishida said at the news conference. "We need to continue working with the United States and other countries concerned to demand North Korea refrain from provocations and observe U.N. Security Council resolutions."