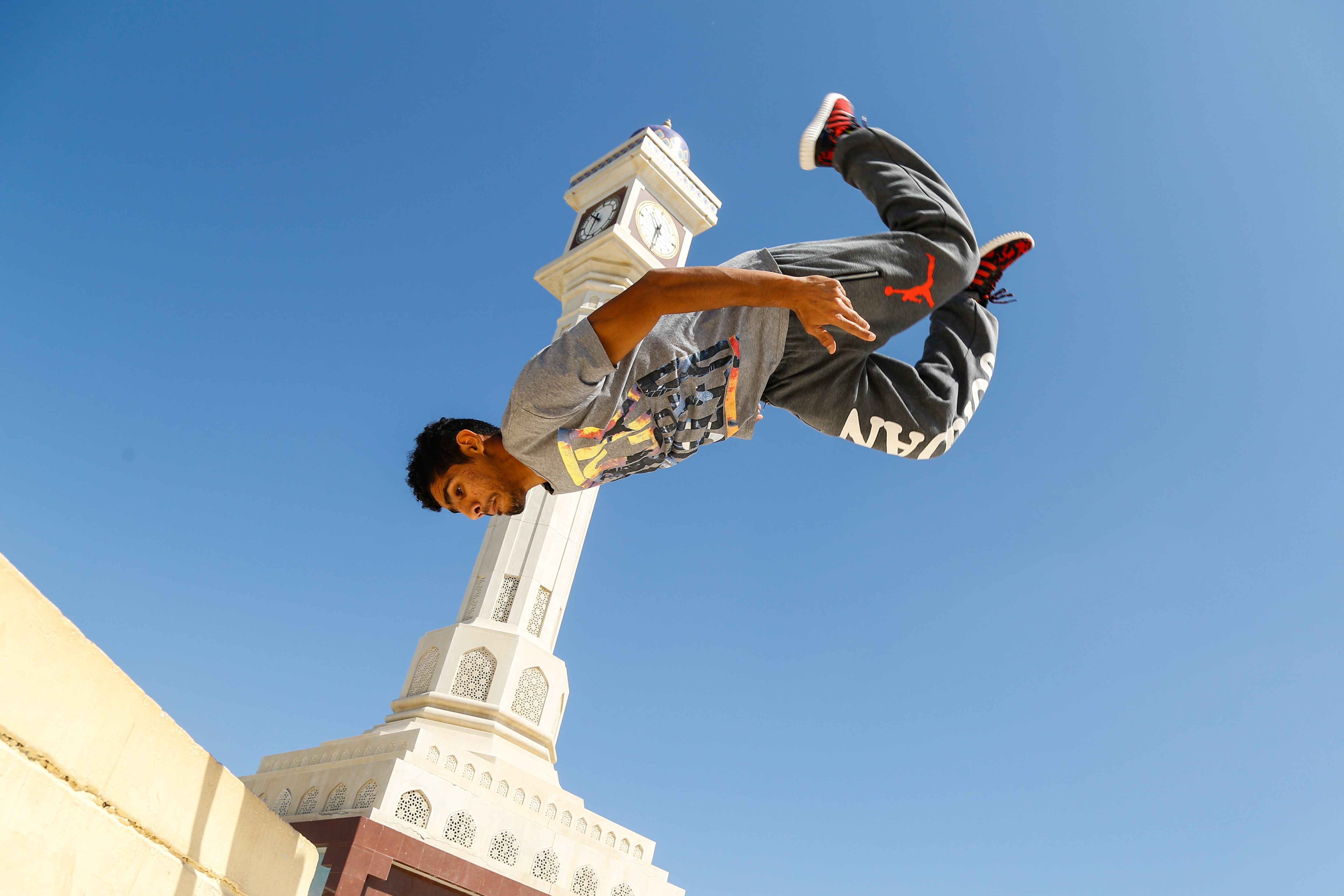 From the underground shadows of Paris to the gritty streets of London comes a unique form of art, an art that inspires freedom and teaches discipline, an art that will intrigue your senses, and perhaps keep your jaw dropped. Parkour, the art of movement, is in town.

M first time seeing men in action was in a 2005 Madonna’s video titled ‘Jump’, which had Parkour master Sébastien Foucan getting down with the art, performing his incredible stunts on the streets and on rooftops of the busy city of Tokyo. It was intriguing to see them practise their freestyle workout moves.

For those who have not heard of Parkour, this freestyle movement involves physical activities like climbing, jumping, vaulting, and swinging to get past obstacles. It is athletic and this inventive strength discipline is nothing short of a blown out full-body workout that’s accompanied with good times and immense fun. In case you haven’t heard of it, Parkour (also called free running) is a form of improvised outdoor gymnastics that requires no equipment but sport shoes and a massive amount of confidence, and those practising the art are informally called traceurs or clans. Climbing walls, swinging from metal bars, vaulting over cars and staircases, and gliding under benches in rapid and accurate moves are some of the few things that set this sport apart.

While this sport gives you the chance to witness extreme acts of daredevilry, here in Oman we have our very own traceur, a 20-year-old Saeid Al Farisi who will woo you with his stunts but keeping the norms of safety in mind.

Saeid who hails from the Wilayat of Quriyat, started practising the art from the age of eight. A self-taught jumper who got inspired by watching Parkour masters do the stunts on television he was keen to establish this cultural sport here in the Sultanate and met other jumpers in due course.

Saeid and his friends, who were interested to learn Parkour, didn’t have any facilities to learn the art as it was a new sport and there weren’t any clubs or designated areas to practise. This motivated Saeid to initiate the art here and to start he formed a group with people from all walks of life interested in mastering the freestyle movement. Saeid started a team in Quriyat, where they practice on rooftops, hills, and farms of the wilayat but with caution. “Parkour is a dangerous sport if not done with care ensuring the safety measures. You need to be physically and mentally ready for taking risks and challenges,” said Saeid adding that “the adrenaline rush is unbelievable”.

The earliest form of Parkour originated in small towns of the French capital of Paris, where a group of youngsters crystallised, nurtured, and developed a new sport that blended art with discipline, called l’Art du Deplacement in the 80s based on parcours du combattant (an obstacle course) created by Raymond Belle. In its heart lies the names of Yann Hnautra and David Belle, who were involved in creating the moves and forming the art. They are regarded by the Parkour community as the originators. They teamed up under the name of “Yamakasi” which means ‘strong man, strong spirit’ and were viewed as rebels and wild beings by the public, and loathed by the French police.

This art of movement came into limelight with an award winning documentary in 2003 and became a widely known emerging discipline with clubs, communities, and competitions scattered around the globe, dedicating a place to hone traceurs and their skills. It evolved from an underground, low-key fitness to a cultural phenomenon that was celebrated and practised passionately by people of all ages.

Here in Oman while Saeid has made his mark in town, and placed an imprint in the hearts of his 32,000 Instagram followers he feels he has a long way to go. “I feel that the society supports me all the way, especially on social media and their encouragement is priceless,” said Saeid adding that, “In return I feed them with countless videos of me performing around the country”. Saeid does his stunts mostly in public places such as parks, with his favourite spot being Ruwi clock tower, as well as desert dunes, hilly areas, mountains, beaches, and small rooftops.

But how do these wall climbers and jumpers master this skill? Parkour requires stamina and a lot of strength, along with a consistent workout regimen. According to Saeid, the best way to start practising for the sport is by creating obstacle course in an environment that’s safe and comfortable. It could be a public park, a local gym, or even in the backyard of your house.

Stack big bags of rice or flour in various places and start vaulting over them, or you can hit the beach and find great spots with soft sands. After getting the hang of it, elevate your workout style and opt for more advanced routines such as pull-ups, push-ups, box jumps, and bench vaults among other things. With an extra dose of nerve, witness yourself soar towards becoming a professional jumper. Ensuring a proper stretching session before any workout is vital to avoid any joint pain and other damages. “I got hurt a few times. I still suffer from a shoulder pain, but I don’t give up. I continue to chase my dream of becoming a professional Parkour practitioner,” said Saeid.

The best part of being in Parkour is the ability to jump rooftops from building to another, but according to Saeid, it is a struggle to do such stunts here as buildings are not as close to one another as in other countries, besides, it may not be allowed in Muscat keeping in mind the safety regulations. So most of his stunts are done on the ground. Popular moves include flipping backwards, jumping over things, vaulting, cat leaps, and swinging.

The culture is evolving and expanding in Oman, with more than 30 people rooting for and aspiring to join the discipline, as Saeid continues to meet and network with other Parkour fanatics around the Sultanate in hopes to establish their own club. He’s ambition is to participate in Kuwait’s Annual Parkour competition and soar higher towards his goal. Till then, we wish him the best of luck and success in the world of freerunners. Take a look at his Instagram (@steve_parkour1) and prepare for jaw-dropping moments. —[email protected]