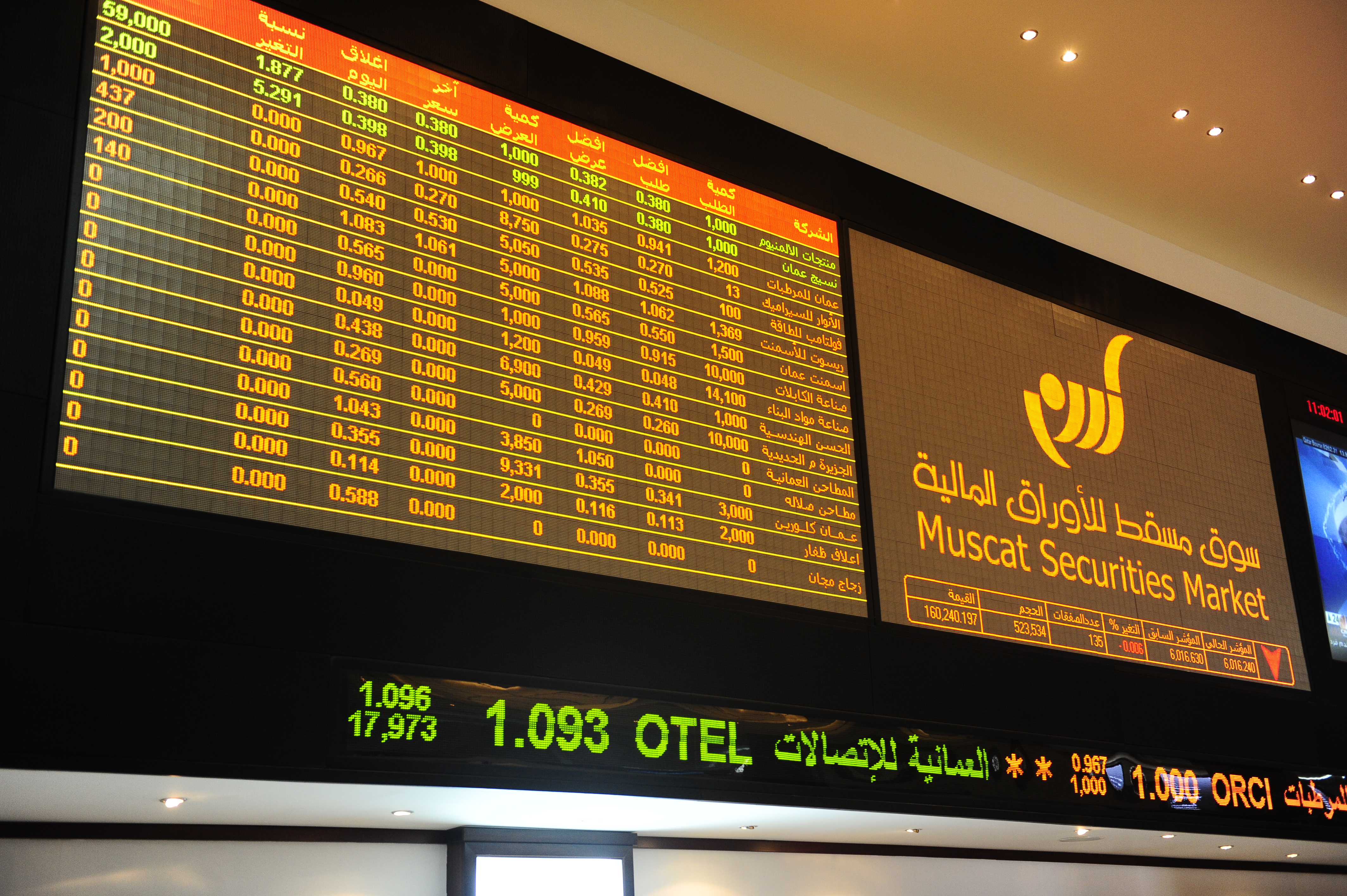 Muscat: Pressured by sustained foreign selling, the MSM30 Index closed at 5,697.61 points, down by 0.32 per cent. The MSM Sharia Index declined by 0.15 per cent to end at 850.22 points. Bank Muscat was the most active in terms of volume as well as turnover. Up by 1.08 per cent, Voltamp Energy was the top gainer, while Gulf Investment Services was the top loser, down by 5.93 per cent.
As many as 867 trades were executed on Tuesday, generating a turnover of OMR6.21 million with 17.1 million shares changing hands. Out of 38 traded securities, 10 advanced, 15 declined and 13 remained unchanged. Omani investors were net buyers of OMR1.09 million followed by GCC and Arab investors for OMR186,000 while foreign investors were net sellers for OMR1.28 million worth of shares.
Financial Index retreated 0.29 per cent to close at 8,025.08 points. National Bank of Oman, Oman & Emirates Holding and BankDhofar gained 0.82 per cent, 0.73 per cent and 0.41 per cent, respectively. Gulf Investment Services, Bank Muscat, Al Izz Bank, Bank Nizwa and Oman United Insurance declined by 5.93 per cent, 2.27 per cent, 1.41 per cent, 1.10 per cent and 0.98 per cent, respectively.
Industrial Index closed at 8,001.87 points, down by 0.14 per cent. Voltamp Energy, Oman Cement and Raysut Cement increased by 1.08 per cent, 0.40 per cent and 0.35 per cent, respectively. Galfar Engineering, Oman Fisheries and Gulf International Chemicals declined by 2.30 per cent, 2.22 per cent and 0.34 per cent, respectively.
Services Index declined by 0.34 per cent to finish at 2,992.93 points. ACWA Power, Al Jazeera Services and OIFC gained 0.55 per cent, 0.52 per cent and 0.45 per cent, respectively. Renaissance Services, Port Services, National Gas, Oman Telecommunications Company and Phoenix Power declined by 2.89 per cent, 1 per cent, 0.77 per cent, 0.73 per cent and 0.70 per cent, respectively.
European markets fall
Most European stocks retreated as signs of caution started to show in markets before this week’s packed schedule of events, which includes a US interest rate decision. The pound tumbled as the British Prime Minister won permission to trigger the country’s departure from the EU.
The Stoxx Europe 600 Index headed for the first decline in five days. Sterling dropped to the lowest since mid-January as parliament paved the way for Theresa May to begin talks with the European Union over Britain’s exit. India’s NSE Nifty 50 Index surged to a record and the rupee climbed to an 11-month high after Prime Minister Narendra Modi’s victory in state elections. The yield on 10-year Treasuries was little changed near the highest level of the year and oil rose after declining for six straight days.
Expectations the Federal Reserve will raise borrowing costs at a faster pace than was expected at the start of this year have surged as data globally pointed to firming growth and accelerating inflation. The question for most traders now is how fast the Fed will move.
“The market is waiting,” said Peter Schaffrik, global macro strategist at RBC Europe Ltd. “Moves today have been fairly muted. The Fed is clearly on everyone’s mind. The rate hike is a foregone conclusion, so it is the press conference that is really relevant.”
The Stoxx Europe 600 Index fell 0.2 per cent. Banking stocks retreated, with the sector index falling 0.9 per cent following recent sharp gains made in the wake of the ECB’s meeting last week. The UK’s FTSE 100 slightly outperformed overall, gaining 0.2 per cent as the pound dropped. Futures on the S&P 500 Index slipped 0.1 per cent after the benchmark gauge ended Monday virtually unchanged.