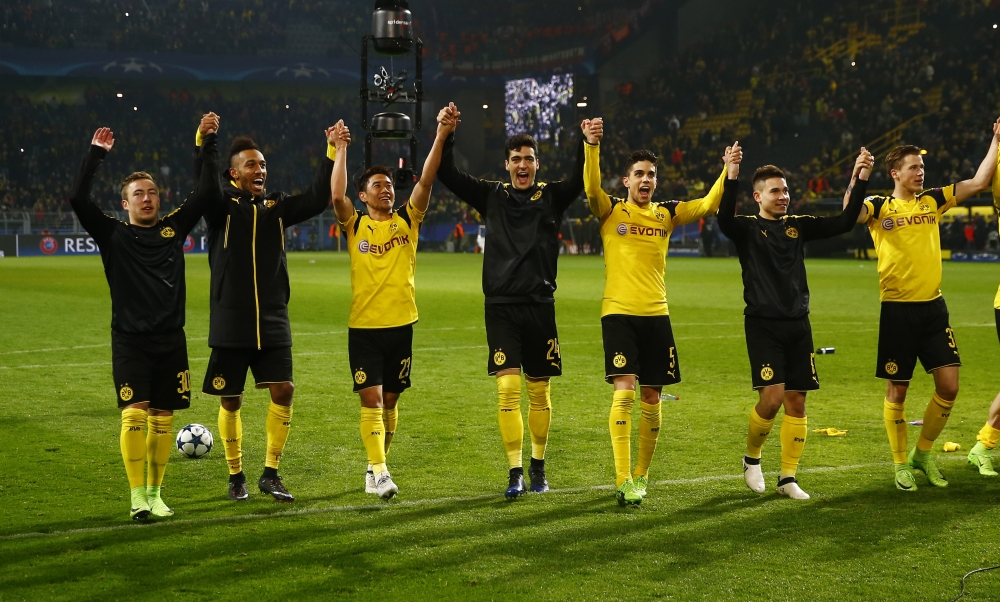 Dortmund: Pierre-Emerick Aubameyang grabbed a hat-trick as Borussia Dortmund crushed Benfica 4-0 on Wednesday to advance to the Champions League quarter-finals 4-1 on aggregate.
The Gabon international, who endured a dreadful evening in the 1-0 first leg loss in which he missed a hatful of chances and had a penalty saved, was back at his lethal best.
He struck either side of a Christian Pulisic goal and added another late in the game as the German side, European champions in 1997, made the last eight of the competition for the third time in 10 years.
It was the third straight match in which Aubameyang scored at least twice as Benfica, aiming to reach the last eight for third time in six seasons, conceded their first goals from open play in more than 700 minutes.
The result also ended the Portuguese side's seven-game winning run.
"We had the confidence to turn the tie around and the team demonstrated that tonight, especially in the second half," said Dortmund coach Thomas Tuchel. "Once you reach the last eight then you want to go to the semi-finals and we will try to do that now."
The hosts, missing the injured Mario Goetze and Marco Reus, took only four minutes to bring the tie level with the Bundesliga's leading scorer heading in at the far post after Ousmane Dembele floated in a corner.
Benfica needed time to recover and free themselves from the hosts' constant pressing game.
They made their first serious foray into the German half after half an hour with Luisao seeing his header saved by keeper Roman Buerki.
Dortmund gradually eased off and the visitors got more space to attack but it was a different story after the break.
The 27-year-old Aubameyang was twice denied by keeper Ederson early on but the Brazilian could do nothing when American teenager Pulisic, replacing the injured Marco Reus, dinked the ball over the keeper on the hour for his maiden Champions League goal.
Aubameyang grabbed his second of the evening only three minutes later and completed a hat-trick from close range in the 85th to kill off the tie.
"We did not start well into the game, conceding so early," said Benfica coach Rui Vitoria. "But we did well after that.
"Everyone could see that the game went well for us and that we could have gone through, we did have our chances after the break and did not use them."