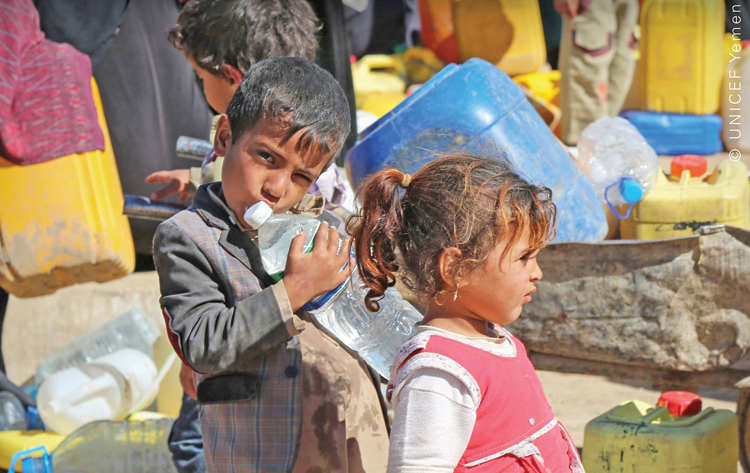 Muscat: More than 11,000 tonnes of mercy aid has been shipped to Yemen through Oman in the two years since fighting began, according to aid groups.
“There are over two million who are out of school right now. The long term impact is very worrying. There is one child that dies every ten minutes in Yemen because of preventable diseases. That child could have been saved if he was vaccinated in time. Over 50 per cent of health facilities in the country are non-functional right now. “It’s clearly a crisis - a very serious crisis. At many times, it’s been said that it’s a catastrophe on the verge,” said Rajat Madhok, Chief of Communication & Advocacy at Unicef in Yemen.
Between May and December, 2015, eight shipments were sent out to Yemen. In 2016, six shipments were sent.
This year, the number of shipments is still not decided. The shipments, organised by ICRC, carried 11,000 tonnes of non-perishable food, medicine and medical supplies along with tents, sleeping mats and ambulances.
“You rarely really see a country policy that reflects the humanity, neutrality and discretion that the ICRC holds. We are extremely thankful towards the Sultanate for allowing us to support humanitarian efforts in Yemen,” said Amer Melhem, Head of the International Committee of the Red Cross in Oman.
“The Sultanate has been flying in wounded victims from Yemen to Oman. Last November, the ICRC President visited Oman and offered to join the Sultanates’ efforts by treating the Yemeni wounded in an ICRC surgical facility in Lebanon. It is complementary to what Oman is already doing. It’s the nature of the partnership,” Melhem said.
The International Committee of the Red Cross (ICRC) was invited by the Sultanate to set up in Oman shortly after the war started. In June of 2015, ICRC established a logistic hub at Salalah which would allow them to send 11,000 tonnes of needed goods over the next two years.
Despite Oman’s neutrality in the conflict, a shipment of supplies from all over the world is sent out through Salalah Port.
“We receive donated goods from the National Red Cross and Red Crescent Societies around the world, and are able to reship the donations to Yemen through the Port of Salalah. There are two things that we are focusing on - the logistics hub in Salalah and the treatment of the wounded,” Melhem said.
Ahmed Akaak, Deputy Chief Executive Officer for Port of Salalah, believes that it is crucial to be supportive in times of need.
“We have proven ourselves as a good neighbour. The fact is, Yemen is a huge population centre, around 28 million, and Oman is one of the few countries that is accessible to the Yemen market through the hinterland.
“We try to make sure through the Omani ports that we can expand the humanitarian aid either through the organisations and even the ICRC who have been using our ports and hinterland to access Yemen. We have done a lot of work to make sure that the Yemenis are not cut off from the rest of the region and try to heal those who have really suffered.
“Last year we invited a lot of Yemeni businessmen to Oman and we called it a joint-investment conference between Oman and Yemen, where we had people from all different regions of Yemen. We play a very fair role to overcome the tough times that Yemenis are going through.
“We try to help with it comes to demurrages, which are fees for the shipment. When the Yemenis muster their cargo to Salalah Port, they accumulate significant demurrages, and they cannot afford to pay. So what we have done is we waive all those demurrages because we need to make sure that we anchor not only for this time but the future.”
“We have seen Yemeni business men that come to Oman and bring jobs. Some have started investing in Oman now. We are trying to be very fair when applying a level playing field. There is no difference between Yemenis and others. They are going through the tough time and we are trying to be supportive towards them.”
A 2016 overview report supplied by the ICRC stated around three million people (ten per cent of the population) have been internally displaced and ten million are uncertain of how they will provide food for themselves. Millions of Yemenis lack access to safe water and health care services. The ICRC has been able to help around three million people across Yemen in 2016.
“Over 1,400 children have been recruited to armed groups, some as young as eight years old,” Rajat Madhok, Chief of Communication & Advocacy at Unicef, said.
Since the war broke out nearly two years ago, Unicef estimates 1,476 children have been recruited as child soldiers while 2,321 children have been maimed (permanently disfigured and injured) and 1,490 children (and counting) have been killed.
“There are more than 2.2 million children who are malnourished, acutely malnourished in the country. Of these 2.2 million children, there are 462,000 children who are classified as acutely and severely malnutrition,” Madhok said.
According to Madhok, a child who suffers from severe acute malnutrition (SAM) is ten times more likely to die than a healthy child his or her age, “therefore this is a huge crisis and we need to be active.”