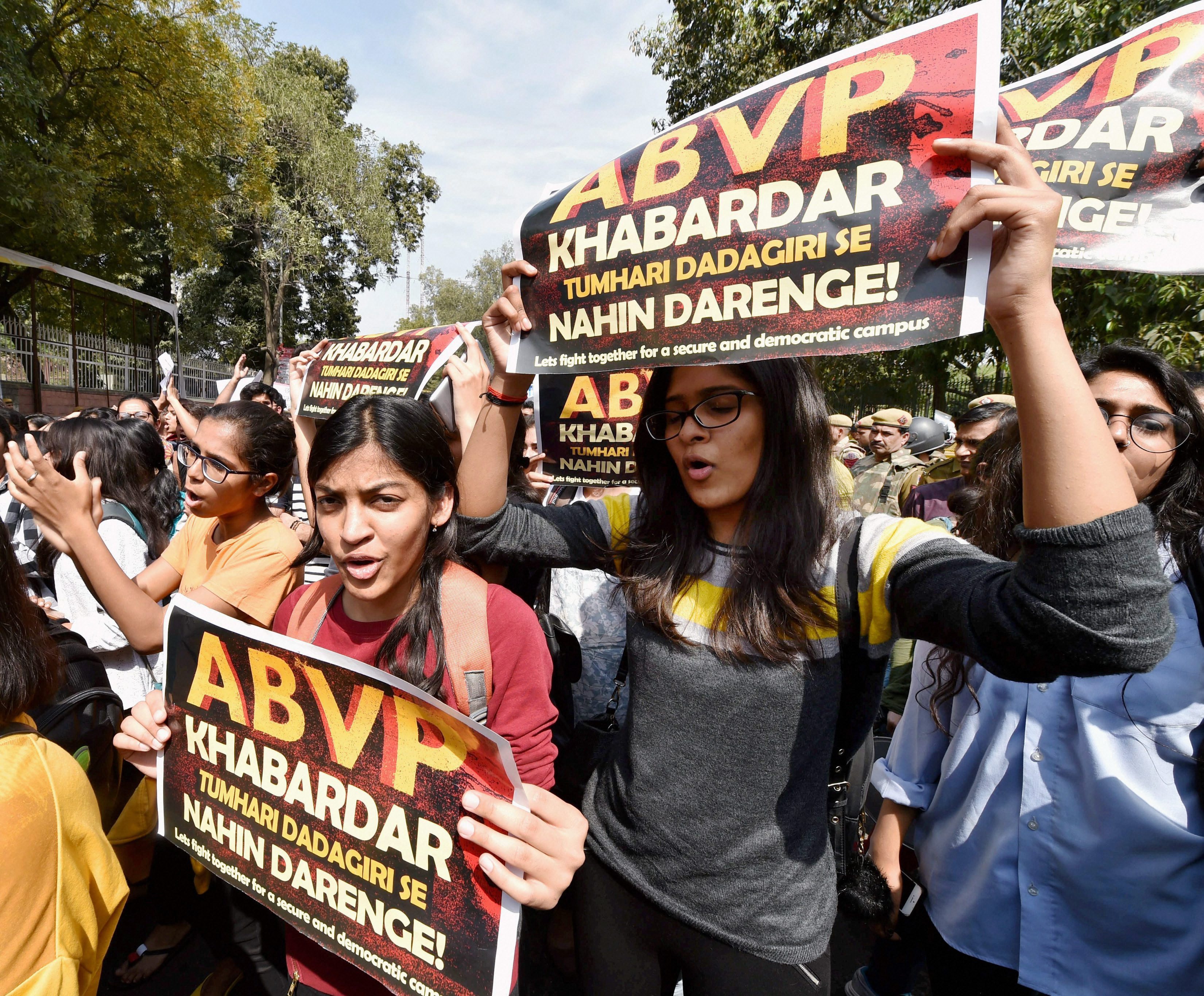 New Delhi: Angered by what they say is "stifling of voices", hundreds of university students and teachers took out a protest march on Tuesday, as the young woman at the centre of the storm Gurmehar Kaur withdrew her protest against the ABVP after alleged rape threats and a virulent social media backlash.
The large-scale participation of Delhi University students, said to be largest in recent times, was remarkable given that the institution is not known for volatile students activism like the Jawaharlal Nehru University, whose students also added their voice at the march besides many eminent academicians and scholars of other colleges.
"The protest is essentially against stifling of voices on campuses across the country including the Delhi University. We want to reclaim the space to discuss and dissent," said All India Students Association leader in DU Kanwalpreet Kaur said.
Akhil Bhartiya Vidyarthi Parishad, the RSS-backed student body, has faced criticism after it was involved in violence at New Delhi's Ramjas college last week.
Several students and teachers of the college were beaten, allegedly by ABVP members, for inviting Jawaharlal Nehru University students Umar Khalid and Shehla Rashid to a seminar which was eventually cancelled.
The 20-year-old Kaur became the centre of the controversy after she launched a social media campaign against ABVP, which immediately drew threats of rape, allegedly by ABVP members, and ridicule by a union minister, a BJP MP and former cricketer Virender Sehwag.
In comments that drew sharp criticism from the Opposition, Union Minister Kiren Rijiju wondered rhetorically who was polluting her mind. He later said his remark was aimed at Leftists, and that Kaur is free to express her views.
"I stand by my comments. Anybody who tweets on social media platform should be careful. But anyone with a contrary view should be allowed to speak. Gurmehar is a young girl and she should be allowed to speak her mind," he told reporters.
Kaur is the daughter of Captain Mandeep Singh who was killed in a militant attack in Jammu and Kashmir's Kupwara district on August 6, 1999, four days after Pakistani troops withdrew from Kargil.
As the controversy grew, Kaur pulled out her campaign and left for Jalandhar to be with her family, requesting that she should to be "left alone".
In a series of tweets, Kaur announced her decision saying she has been through a lot and "this is all my 20 year self could take (sic)".
Kaur earlier urged people not to identify her as a "martyr's daughter" if that bothers them. Today, as the march made its way through the North Campus of Delhi University, with hundreds of students of JNU, DU and Jamia, she tweeted, "All my friends. Our lovely faculty! how I wish I was there."
In an earlier tweet, she had urged people to join the march, which is "about students and not about me", in large numbers.
"I'm withdrawing from the campaign. Congratulations everyone. I request to be left alone. I said what I had to say. I have been through a lot and this is all my 20 year self could take. To anyone questioning my courage and bravery...I've shown more than enough," she said.
Meanwhile, New Delhi Chief Minister Arvind Kejriwal met Lt Governor Anil Baijal who in turn promised action against those who violated the law. Delhi Police said it has registered a case of harassment and criminal intimidation against unknown persons in connection with the "rape threats" allegedly received by Kaur.
The case was registered following Kaur's complaint to the Delhi Commission for Women. The Delhi Police has also requested their Jalandhar counterpart to provide adequate security to Kaur.