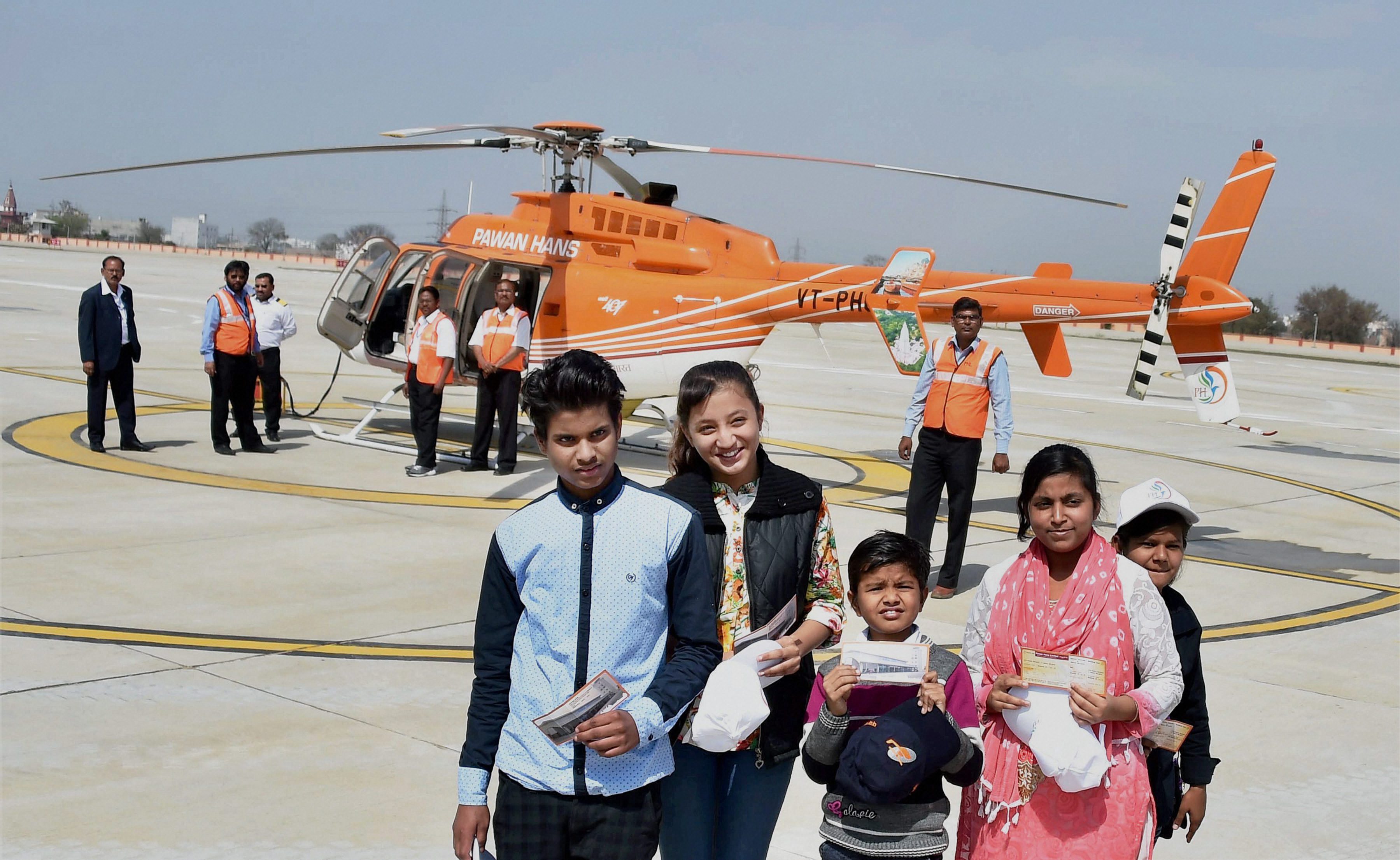 New Delhi: India's first dedicated heliport built at a cost of Rs1 billion for flying in and out of Delhi to nearby areas in choppers became operational here on Tuesday.
Civil Aviation Minister Ashok Gajapathi Raju inaugurated the state-of-the-art heliport at Rohini in north Delhi, saying this is the first such integrated facility in South Asia.
The heliport that is expected to reduce congestion at the Indira Gandhi International Airport here would also provide air connectivity to nearby pilgrimage centres besides medical emergency evacuation services.
The first flyers from Rohini heliport were five young boys and girls from CRY, an NGO which works for underprivileged children. They were taken on a chopper for a joyride over Delhi.
Set up at an investment of about Rs1 billion by the Pawan Hans Ltd, the heliport is spread over an area of 25 acres and consists of a terminal building having capacity for 150 passengers, four hangars with parking capacity for 16 helicopters and nine parking bays.
Also, it has maintenance, repair and overhaul (MRO) facility for the upkeep of Pawan Hans fleet as well as for third-party maintenance work.
Pawan Hans Ltd is a joint venture between the Central Government and ONGC with the former holding 51 per cent stake and latter the rest 49 per cent. "We are excited. This is the first facility in South Asia. Of course, in terms of passengers' traffic, India is the fastest growing in the world. Somehow in helicopter and cargo, we have lagged behind. So we need to pull up our socks.
"If we have to take it (helicopter industry) to the higher level, (then) it needs training (training in skill development)," Raju said after the inauguration.
Since Pawan Hans plans to start joy rides from April from the Rohini heliport, when the vacation period sets in, Raju said, "joy rides have a future."
Minister of State for Civil Aviation Jayant Sinha, Civil Aviation Secretary R. N. Choubey and Pawan Hans Ltd Chairman and Managing Director B. P. Sharma were also present at the ceremony.
Raju also said that his ministry has made a request to the Liutenant Governor of Delhi as well as the city Government for providing Pawan Hans the adjacent five acres of land for setting up helicopter pilots and AME training centre to meet the growing demand for such professionals.
"As of now, except the armed forces, everybody else goes abroad for training. We are trying to bring training and MRO works back to the country because that creates jobs. Overall, it (the heliport) is a step in right direction," Raju said.
Rohini heliport will become not only a hub for the helicopter industry in the country but push government's ambitious regional connectivity scheme, Sinha said.
The facility will be useful in providing medical emergency, public safety and enhancing tourism, he said, adding helicopter services could become economically viable if the prevailing 25 per cent tax on ATF was reduced.
Stating that the facility is India's first integrated facility for rotor wing aircraft including their landing and takeoff, Sharma said it also has separate air traffic control (ATC), fire and fuelling services.
The government has envisaged four heliports in four regions of the country in the new civil aviation policy announced last June.
"This is the first of the four heliports that have been talked about in the policy. The challenge now is to move as much of helicopter operations here from Delhi airport as possible. That would reduce the congestion at the IGIA," Choubey said.
Delhi Airport currently handles about 40-50 helicopter arrivals and departures on an average daily besides the large-scale fixed-wing operations. Pawan Hans has carried out the Rohini heliport project for the civil aviation ministry.
The heliport will also be used for operating services for disaster management, emergency medical services, law and order surveillance as well as a centre for the skill development of pilots and engineers.
Pawan Hans has also prepared a roadmap to connect all the major destination from Rohini heliport to Shimla, Haridwar, Dehradun Mathura, Agra, Meerut and industrial hubs such as Manesar, Bahadurgarh, among others. It plans to provide air connectivity between Delhi and neighbouring cities from Rohini Heliport as well.