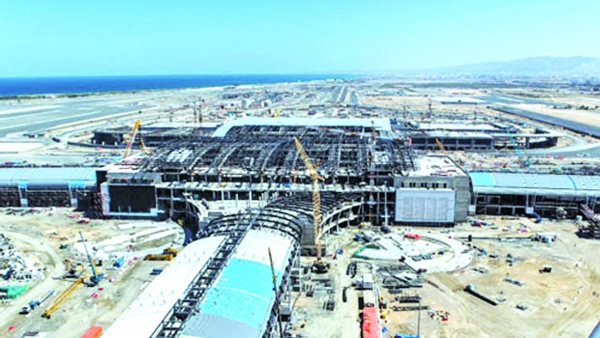 Muscat: Key infrastructural projects completion will catalyse the Omani economy in 2018, says Paul Callaghan, partner at KPMG in Oman.
“The recent announcement by the Ministry of Transport and Communication confirming the opening of the new airport by end of the year coupled with the Sultanate’s natural beauty will certainly boost the tourism industry. Also, Oman’s excellent geographic position will be enhanced by the extension of Duqm port and be a major driver for the logistics industry,” he said.
Oil prices have hovered around $55 a barrel since the beginning of 2017 following an OPEC deal that saw nearly 1.8 million barrels of oil slashed from markets every day. As a result, global crude oil inventories are expected to fall by 600,000 bpd allowing GCC economies to heave a sigh of relief as their heavily oil dependent markets cope with drying government finances and dwindling hydrocarbon revenues.
“We expect growth to recover to 4.6 per cent in 2018, due to easing fiscal headwinds, improving regional outlook, and a sharp rise in hydrocarbon sector output. After significant government spending cuts between 2015 and 2017, we believe government spending will start to rise again in 2018. There will, of course, be restraint on expenditure, but spending growth is likely to be positive after three years of cuts,” Giyas Gokkent, Senior Economist at IIF, said.
Oman continued with austerity measures this year and the IIF report highlights that although the fiscal deficit is very large, it is expected to narrow sharply due to spending cuts by the government.
“Subsidies are being removed and electricity tariffs for corporates have been hiked by 30-50 per cent in 2017. A string of non-oil revenue raising measures such as an increase in fees and corporate income taxes and phasing out of exemptions have also become effective this year.
“The VAT, at 5 per cent, which is expected to be implemented in 2018 in conjunction with other GCC countries, is likely to generate 1.5 per cent of GDP in additional revenue. Finally, the authorities have announced privatisation plans, starting with the divestment of Muscat Electricity Distribution Company in 2017,” the report stated as reasons for lower deficit in 2018.
According to Mathias Angonin, Lead Analyst at Moody's, although deficit is high, the economy is likely to recover by 2018.
"Fiscal deficits will remain high even though they are likely to recede to 5.8 per cent of GDP in 2018 from 17.2 per cent of GDP in 2016, mainly on the back of a recovery in oil prices and the introduction of VAT. Nonetheless, real GDP growth should pick up to 2.2 per cent by 2018 from 1.8 per cent in 2016 on the back of acceleration in non-oil activity," he said.
Scacciavillani believes that the IIF report probably does not account for the initiatives highlighted by Tanfeedh or the prediction of growth could be higher.
“The blueprint of projects has already been showcased by Tanfeedh. It is only a matter of time when it will be implemented. I believe the predictions would get an additional boost if the Tanfeedh proposals are acted upon,” he explained.
Another boost to the Sultanate economy could come if China, the largest importer of Omani crude, witnesses a rebound in its slowing economy. The US infrastructure plans which could pump in billions of dollars into its economy could drive global growth and tourism in Oman.
Oliver Cornock, regional head of Oxford Business Year, said that there is a cause for optimism in Oman that the importance of diversifying revenue streams and economic reform has been underscored, although challenges remain.
“The reforms include ensuring that the all-important processes of economic and fiscal reform do not impact growth too negatively and enable the private sector to play a greater role in the economy. It’s a fine balance,” he said.