Bad weather to continue in Oman on Sunday 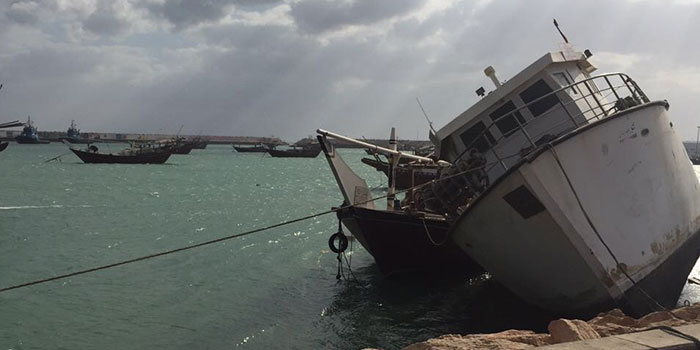 Muscat: Strong, icy winds and sandstorms battered Oman this weekend, and there’ll be more of the same today, weathermen predict.
“There will be strong winds and sandstorm. However, there will be respite from cold wave and temperatures will be better,” an official at the National Multi Hazard Early Warning Centre told the Times of Oman.
Also read: Musandam pounded by intense hail
“It will remain breezy to windy and chilly into Monday. It should turn more seasonal starting Tuesday,” said Jason Nicholls, Senior Meteorologist at Accuweather.
Since Friday, northern parts of Oman have been reeling under a cold snap, especially Mussandam and Khasab, while strong winds battered other parts of the country, including Salalah and Sohar.
In Ras Al Hadd and Sur, sea water ended up inundating many work sites and residential areas.
“It was shivering cold in Mussandam and Khasab. The area was under several inches of water,” Bader Ali Al Baddaei, an administrator of www.rthmc.net, a local Web-based forum that discusses weather in Oman, told the Times of Oman.
“Due to rain, the wadis in Khasab were also overflowing,” the weather enthusiast added.
According to staff at Oman’s meteorology department, the minimum temperature in the Sultanate hovered around 10 degrees Celsius on Friday and Saturday.
Data released by the department revealed that Jabal Shams recorded a minimum temperature of minus 3 degrees Celsius, while the maximum temperature was 5 degrees Celsius in Jabal Shams.
Meanwhile, residents in Sur and Ras Al Hadd said sea water overflowed and ruined their work sites.
“I am seeing such a phenomenon for the first time. I have three work sites and sea water has inundated all of them,” a company official in Sur said.
Due to bad weather, National Ferries had to cancel its services connecting Muscat, Khasab, Shinas, Masirah, Lima and Bander Abbas with effect from Thursday.
The meteorology department had predicted that the sea waves will rise up to a height of three metres during the unstable weather.
Strong winds caused damage to properties, forcing the Public Authority for Civil Defence and Ambulance (PACDA) to issue warnings to the public to stay safe.
The PACDA tweeted two numbers (9999 and 24343666) to call in case of emergency and also advised people to stay away from electricity poles.
On Friday and Saturday, bad weather forced Oman Airlines to cancel or reschedule domestic flights.
“Domestic flights are affected by strong winds and several (were being) delayed or cancelled. Operations will resume subject to weather conditions,” Oman Air tweeted on Saturday.
Salam Air also had to cancel its flights on Friday and Saturday.
“Due to deteriorating weather conditions in Salalah, Salam Air regrets to inform you of the cancellation of today’s flights, OV001 & OV002,” the airline tweeted.
Salam Air’s flight OV001 to Salalah had to return to Muscat due to strong winds and dust.
Since Friday, passengers in Salalahhave been forced to postpone their travel plans due to flight cancellations.
“I had to fly to Muscat and then to India. However, flights have been cancelled due to bad weather and I have postponed my travel plans,” Suresh Kumar K, a resident in Salalah, said.
For Sunday and Monday, Oman meteorology department has predicted mainly clear skies. However, there are chances of sandstorm and fog in Buraimi and Dahirah governorates, it added.
This is the second time in the space of a week that Oman witnessed rainfall. Last week, showers in the country had caused flooding of wadis and accidents along many major roads in the Sultanate.
Meanwhile, the United Arab Emirates was also affected by bad weather, forcing the cancellation of a number of outdoor events in Dubai on Friday.
The UAE’s National Centre of Meteorology and Seismology (NCMS) has warned residents as towering clouds brought rainfall and fresh winds to the northern areas of the UAE.
On Friday, unusually strong winds resulted in a crane toppling over along the Sheikh Zayed Road, injuring at least one person, damaging a hotel and several vehicles.
Blowing debris, including sheets of steel, wood and glass, caused chaos in the area around the Nassima Royal Hotel, where the crane collapsed.