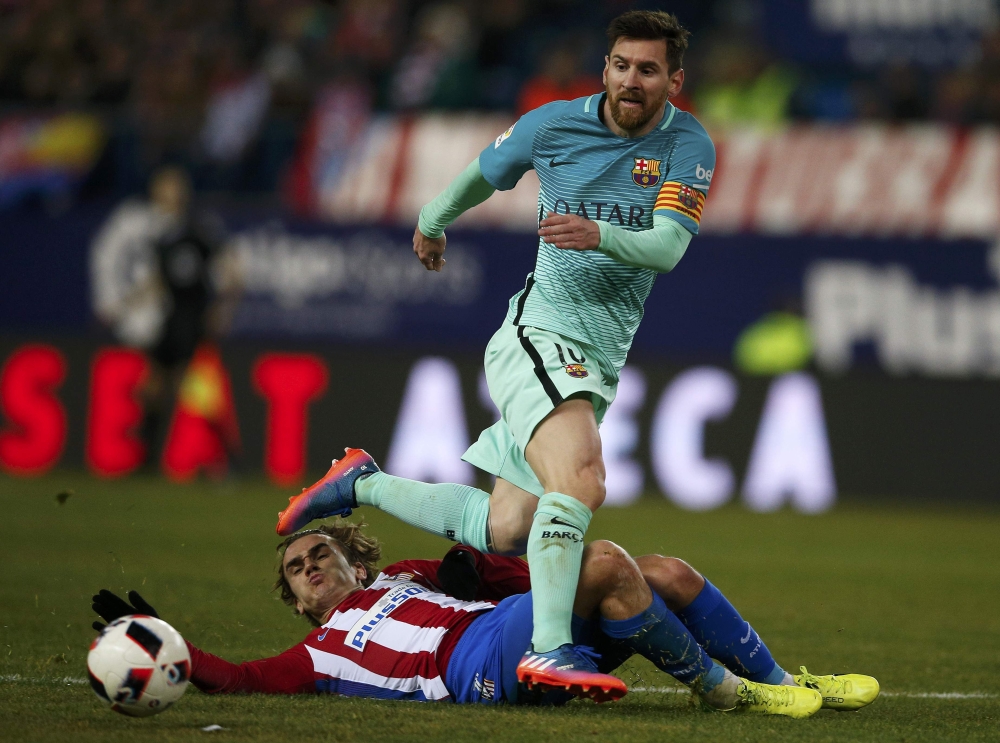 Barcelona: Luis Suarez and Lionel Messi scored stunning goals to edge Barcelona towards a fourth consecutive King's Cup final with a 2-1 win at Atletico Madrid on Wednesday, although the holders were lucky to survive a late onslaught from the hosts.

Suarez opened the scoring with a breath-taking individual goal in the seventh minute, carving Atletico open with a thrusting run from the halfway line and producing a crisp low finish before Messi smashed in off the post from outside the area in the 33rd.

Atletico vastly improved in the second half and after Antoine Griezmann's header reduced the deficit in the 59th minute they laid siege to the Barca area, but the equaliser remained elusive. The return leg at the Nou Camp takes place next Tuesday although neither Barca forward Neymar nor Atletico captain Gabi will be able to play through suspension after picking up bookings.

"It would be absurd to think you can come to the Calderon and not suffer. We did everything to try and survive their waves of pressure and for now we can enjoy the result," Barca coach Luis Enrique told reporters. "You could say we should have been more effective in the second half and finished the tie off, but that's just theory, the reality is they had a lot more chances than us. There's things I need to improve but it's a huge result for us."

With his side trailing by two goals, Simeone had nothing to lose and made an attacking change at the break, bringing on Fernando Torres for defender Sime Vrsaljko. Roared on by the typically raucous Vicente Calderon crowd, Atletico suddenly looked more determined to get back into the tie.

A clever back-heel by Torres released Gabi from close range but Jordi Alba made a vital block. Barca could not contain Atletico for long, however, and their goal arrived from an old staple of Simeone's side, a set piece. Gabi chipped the ball deep into the box for Diego Godin to glance across the box and Griezmann rose to nod Atletico back into the tie.

The France international had a chance to level soon after as Filipe Luis rolled the ball across to him but Jasper Cillessen made himself big and stopped the shot at point-blank range.

The Dutch goalkeeper looked shaky for much of the second half, however, and was fortunate his frailties were not punished by Atletico, as Torres and Gameiro each missed the target after moments of indecision.

"In the second half we were much closer to how we wanted to be," Atletico coach Simeone said. "I'm very happy with the image we showed in the second half, with our intensity and attitude. We leave here with the sensation that if we play like that in the second leg we can still go through."