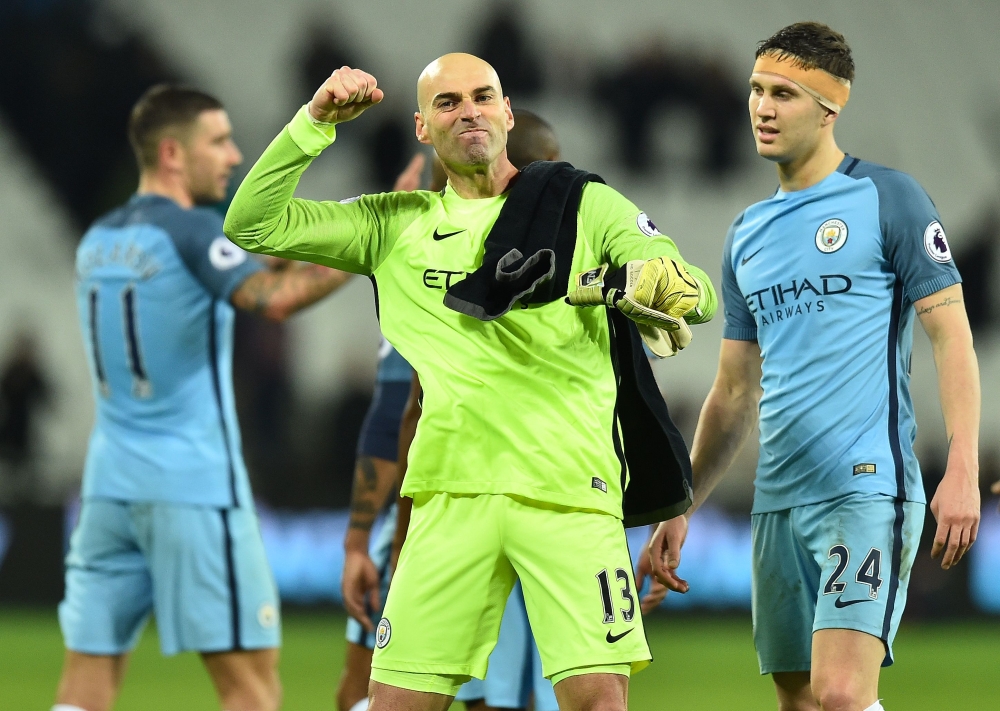 Clinical finishing was in short supply at Old Trafford, however, where United came up against an inspired performance from Hull keeper Eldin Jakupovic, who made a string of superb saves to keep Jose Mourinho's side at bay.
While City's victory moved them level on 46 points with fourth-placed Liverpool and kept leaders Chelsea just about in their sights, United's slip-up left them sixth, four points adrift of City and 14 off the summit.

Hull's unlikely point moved them off the foot of the table while Stoke City and Everton drew 1-1.

It has not been plain sailing for City manager Pep Guardiola in recent months and he came into Wednesday's game facing the prospect of losing three successive top-flight away matches for the first time in his managerial career.

City had already beaten West Ham twice this season with an aggregate score of 8-1 and they were returning to the London Stadium less than a month after thrashing their hosts 5-0 in the FA Cup third round.

De Bruyne started and finished off a swift counter to put them ahead after 17 minutes and with the home side in disarray, City turned the screw. Sane gave Silva a tap-in at the far post four minutes later, before Jesus grabbed his first for the club.

City's January signing side-footed in Raheem Sterling's pass six minutes before the break and when Sterling was felled by Jose Fonte, making his West Ham debut, Toure stepped up to thump his penalty into the net.

Jesus caught the eye with his high-energy display and as part of a youthful front three with Sterling and Sane, had City boss Guardiola purring.

"Gabriel Jesus is a fighter with an instinct for the goal. He's good at assists too," Guardiola told the BBC. "We played a front three with an average age of 20. I like the fans to be excited. Those players are the future of the club."

United, facing Hull for the third time in 23 days after their League Cup semi-final, were thwarted by a determined Jakupovic, who saved well from Zlatan Ibrahimovic and even more impressively from substitute Juan Mata. Daley Blind, Marcus Rojo, Marcus Rashford and Ibrahimovic missed further chances as United dominated, although they almost suffered a stunning defeat when Lazar Markovic hit the post for Hull.

Stoke's Peter Crouch dusted off his robot dance after opening the scoring against Everton with his 100th Premier League goal after seven minutes, finishing on the stretch after Marko Arnautovic had broken the offside trap.

At 36 years and two days, the former Liverpool and England forward is the oldest player to reach his Premier League century. The lead lasted until six minutes before the break when Ryan Shawcross deflected Seamus Coleman's shot into his own goal.