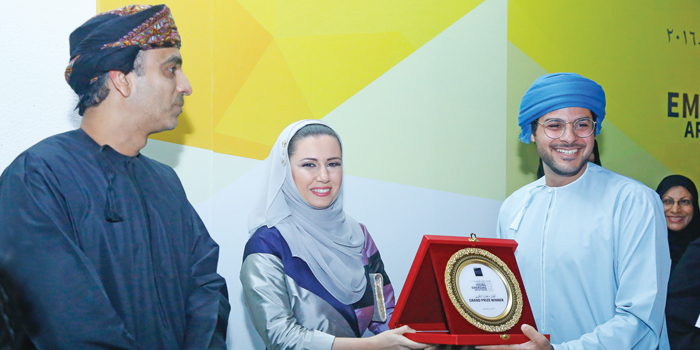 Muscat: Abdulrahim Al Kindi has been named the Stal Gallery Young Emerging Artist of the Year for 2016.
The 27-year-old, who was chosen as the winner of the prestigious award from among 10 other artists, will now have the opportunity to take his career to the next level with a residency course in either Britain or Germany, the costs of which will be footed by the gallery themselves.
Al Kindi, who specialises in photography and art installations, uses art as a medium to portray a satirical image of society, poking fun at the hypocrisies that are found in daily life.
“I have been taking photographs for about three years now, and I used to post them on Instagram where they were liked by a lot of people, and that gave me the passion to pursue this as a hobby,” said Al Kindi, who serves as the creative director for Akkasa Production, a film production company in the Sultanate.
Although Al Kindi did graduate with a computer science degree from Sultan Qaboos University, his real passion, he said, always lay in the visual medium.
“To me, photographs and videos are a great way to show people the issues we face as a society, and I want to use art to change people’s perceptions of our habits,” said Al Kindi. “My parents have always been supportive towards me, but even I am not sure if they know that I was being considered for this award tonight.
“To me, winning this prize represents a great opportunity because now I can do my artist’s residency abroad and I can expand my career,” he added. “Not everyone gets a chance like this and I want to ensure that I can use this to continue to change people’s attitudes for the better.”
Now in its second year, the award was the brainchild of famous Omani artist Hassan Meer, who also serves as the Stal Gallery’s curator. The event was also run in collaboration with Alserkal Avenue, a UAE-based organisation which aims at promoting culture in the Middle East. The special guest for the evening was Her Highness Sayida Afrah bint Talal bin Tariq Al Said.
“The vision of Stal Gallery has never been more deeply rooted than when the Young Emerging Artist Prize was started in 2015,” he said. “This has been a success largely because of the different approaches of the artists who are in the competition.
“The Omani youth have brilliant ideas, a fresh take on modern civilisation, society and way of life,” added Meer. “They see things differently and express them in unique and adept means with tools that had not been available before, resulting in pieces that would otherwise be traditionally erroneous.
“It is our duty to encourage the youth to interpret the world that they live in and express their innermost consciousness through art, while continuing to preserve our rich cultural heritage embedded in their work and shape the auspicious future ahead of them,” he said.