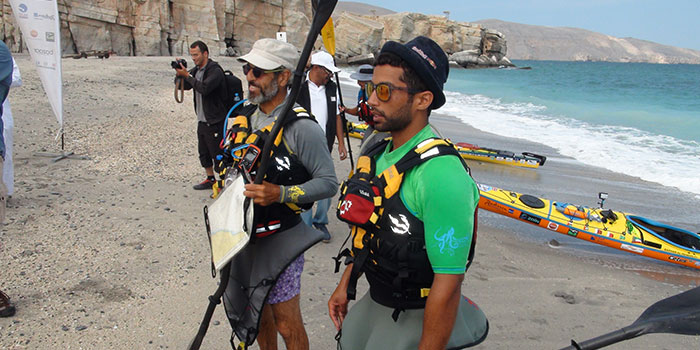 Muscat: After 75 days and a 2000 kilometer journey along the Arabian Gulf coast, "Kayak for Kuwait" finally reached Oman.

A team of three kayakers took off from the islands of Warba and Bubiyan in Kuwait and passed through the Gulf Cooperation Council states – Saudi Arabia, Bahrain, Qatar, Emirates and finally ended their journey in Khasab, Oman – to look at the challenges the environment, especially marine life, is facing from human pollution and raise awareness about the importance of maintaining a healthy, natural environment.

The team started their journey on 10 November 2016 and traveled almost 2000 kilometers in 75 days after two years of preparation.

Upon reaching the Sultanate, the Ministry of Environment and Climate Affairs, namely Mahmood Al Dhuhaili, Director General of Administrative Affairs and Finance and Head of Planning and Supervising of Ministry Events, greeted the team in Khasab.

Bashar Al Hunaidi, team leader of Kayak for Kuwait said, “People nowadays don’t like educational lectures, so we said that as normal citizens, we will try and attract people to environmental issues through a new experience.”

“Our main goal is to preserve marine life so that our next generation can depend on it since it is our source of food, economy and development,” he added.

He added that for the past few years marine life was neglected and that they have to “change people’s perception about the environment and marine life.

“People should know how to deal with their environment so that it doesn’t reach a point where it is difficult to fix it. The Arabian Gulf and the Sea of Oman is one sea and that is why our motto for the journey is, ‘One Ocean, Two Seas... One Destiny’,” said Al Hunaidi.