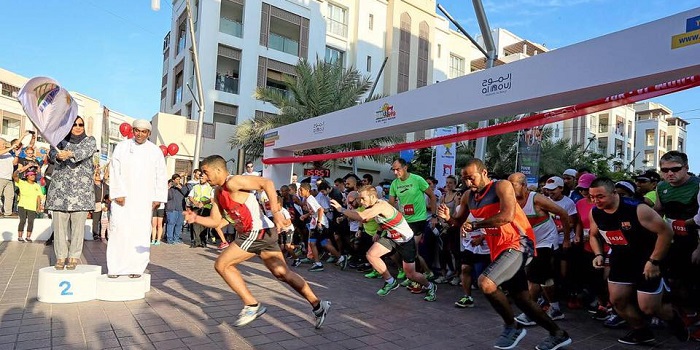 Muscat: Pierre Breuer has been crowned the winner of the men's stage of the Open Marathon category at the Al Mouj Marathon, which was held this morning. The Belgian completed his 42.195 km run in two hours, 42 minutes and 51 seconds. Omani national Amer Al Mari and Briton Edward Black occupied second and third place on the podium.

In the women's division, Icelander Asta Parker finished the arduous course in a time of 3:23:46, while American Kisha Josie and Helen Graham of Great Britain brought up the rest of the chasing pack.

Now in its sixth year, the Al Mouj Muscat Marathon was designed to test the endurance, determination and discipline of those who have dedicated them themselves to athletics, and was split into three different races. While the most challenging of them was the Marathon, runners could also choose to run in the 21.1 km Half-marathon and 10 kilometer runs if they chose to.

But both the Marathon and Half-marathon were further subdivided into three categories: while those between the ages of 17 and 39 signed up for the Open category, there was also a Veterans section open to runners aged between 40 and 55, and a Super Veterans course for competitors aged 56 and up.

It was Omani Abdullah Al Qarini who ended up on top at the end of the men's Open Half-marathon with a time of 01:10:19, while Kenyan Irene Ng'eno took first place among the women, posting a time of 01:42:46. Belgian Johan Casaer won the Veterans Half-marathon with a time of 01:26:05, while Birgit Schultz was the pick of the women, with her time of 01:35:01. The Netherlands' Freek van Dijk (01:36:56) and Britain's Sue Smith (02:17:06) led the pack during the men's and women's Super Veterans Half Marathon to finish ahead of their competitiors at the finish line.

The 10k, though, was segmented into four categories: a Junior's section was opened up to encourage those between the ages of 10 and 16 to participate, and an overwhelming response saw Ewan Cosker finish in front of his competitors with a time of 43:35, as Priyanka Maharaj took first place among the girls, clocking a time of 53:43.

Omani Yunos Al Jabri (35:59) won the Open Men's section, with Maria Marcicova finishing ahead of her counterparts in the women's section, posting a time of 45:58. Danilo Cifola (41:47) and Sally Hart (48:53) were first to the finish in the Men's and Women's Veteran races respectively, and first place among the Super Veterans went to the husband-and-wife team of John and Adrienne Howard, who were only a second apart.

Needless to say, with the largest participation so far, the Al Mouj Marathon has been an overwhelming success, with 1318 runners taking part in the latest edition of the event.

"We are delighted to be the title sponsor of this international sporting event and look forward to hosting you at Muscat’s premier lifestyle destination," said Nasser Al Shaibani, Acting CEO of Al Mouj Muscat. "Promoting the benefits of an active lifestyle is a key community objective at Al Mouj, whether you’re joining us to enjoy a game of golf, take a trip to the beach or indulge in a day of watersports and fishing. Our title sponsorship of the Muscat Marathon is therefore a natural extension of our offerings.

"We are delighted that the Al Mouj Muscat Marathon will not only put healthy sporting lifestyles under the spotlight, but also give us the opportunity to showcase the Sultanate of Oman as a world-class tourism and sporting destination," he added. "From the entire team here at Al Mouj, we wish you every success as you embark upon the challenges ahead."