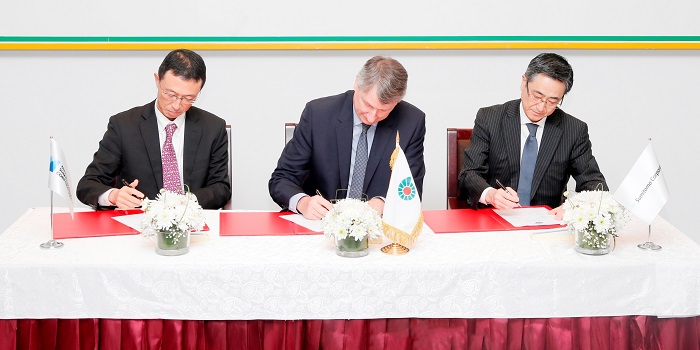 Muscat: Petroleum Development Oman (PDO) on Thursday signed a $1.2 billion contract to supply piping for its drilling operations through Duqm.

The five-year deal with Japanese supplier Sumitomo further includes a new supply yard in the Duqm Special Economic Zone, which will be a logistics centre for materials being delivered to PDO’s drilling locations. The business activity in Duqm free zone is expected to get a major boost with the signing of the new pipe supply contract.

The agreement will confirm PDO as an anchor tenant at Duqm from mid-2018, with up to two shipments a week (carrying 3,000 metric tonnes of pipe) being routed through the port for its oil and gas fields.

The logistics hub will provide integrated supply chain management services – such as storage, planning and delivery – and 30 trucks a day will be needed to transfer the pipes from the new supply yard to PDO’s drilling locations.

The move will significantly build capability at Duqm to become the primary logistics hub for the Sultanate’s oil and gas sector and complements the Tanfeedh programme on economic diversification.

“This contract will spur the growth of Duqm and attract even more business as the port demonstrates its ability to handle major operations,” said PDO’s managing director Raoul Restucci. “Every year, we drill 600 wells across our concession area and all the piping for that will be managed at Duqm.”

Tanfeedh, the national initiative of economic diversification, plans to make port of Duqm as one of the most important ports for logistics service. Although Oman has delayed the railway project, one of the Tanfeedh’s proposed projects in logistics due to be completed in 2021 is a 337 km railway line from Shuwaymiyah, the mineral rich region in the south, to the Port of Duqm highlighting the significance of the port in Oman’s diversification plans.

“This agreement is further evidence that PDO’s in-country value (ICV) programme to retain more of the oil and gas industry’s wealth in the Sultanate by creating Omani jobs and developing local capability and infrastructure is going from strength to strength,” noted Restucci.

“At the same time, it underlines our commitment to turn the promise of Tanfeedh programme on economic diversification into concrete action.”

The new agreement is a renewal of an existing contract to supply PDO oil tubular goods, casing and tubing pipes used for drilling, and consolidates the company’s long-standing business relationship with Sumitomo.

“This is an exciting challenge for us, and is a great honour for the whole Sumitomo Corporation Group to participate in the development of a new industrial oil and gas capital for Oman. We believe more and more high-end pipes will be required for tougher well conditions in the future. As a premium casing and tubing supplier, NSSMC will continuously supply high-performance goods to PDO from our enriched product line-up,” added Abiko.

Under the terms of the deal, Sumitomo has committed to further support ICV initiatives, on top of its large investment in Duqm. The proximity of Duqm to Oman’s major oil fields and its links to a congestion-free road network will enable PDO to reduce road safety exposure and achieve cost reductions.

“Duqm meets a strategic need for Oman, both in terms of its location and facilities. For PDO and our contractors, its proximity to some of our major fields is a great boon as it enables us to import and move vital equipment and material faster and cheaper than routing cargoes through other locations,” Restucci noted.

“This new approach will save time and money while at the same time aiding the development, capability and capacity of a vital logistical hub for the Sultanate, complementing the well- established ports of Sohar and Salalah.”