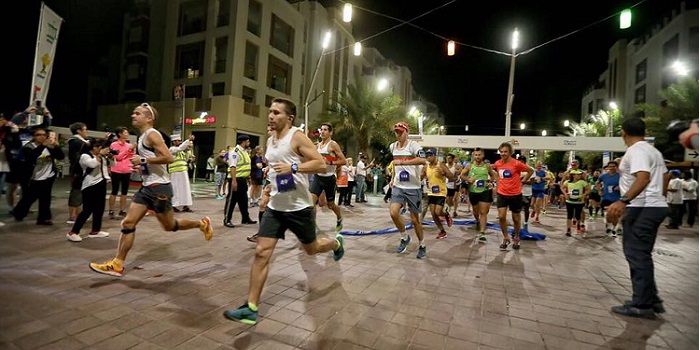 Muscat: Now in its sixth year, the Al Mouj Marathon saw a record number of attendees take to the starting line when it kicked off at 6 am this morning.

1318 runners are expected to participate in the race, 177 of whom are travelling from overseas. 863 male and 445 female participants assembled at Al Mouj this morning, 115 of whom were Omanis.

The event is split into three categories, all of which are designed to test the will and endurance of those who are looking to challenge themselves and push their limits even further. While the Marathon is the longest stretch of the race, totalling a whopping 42.195 km, the Al Mouj Marathon also features a Half-marathon, with a total distance of 21.1 km, as well as a 10-kilometer challenge course.

A total of 164 people are looking to push their limits to the max at the Marathon, while significantly more will be vying for honours at the Half-marathon - 393 runners have signed up - an an incredible 761 competitors have registered themselves for the 10k run.

"We are thrilled to be hosting the sixth edition of the Muscat Marathon, an iconic national sporting event that unites our community and showcases the beauty of our country to the world," said HE Maitha Al Mahrouqi, the Undersecretary of the Ministry of Tourism in Oman and Chairwoman of Oman Sail. "2017 marks the start of an exciting new era for the race; we are looking orward to welcoming competitors from 75 different nations

"Oman prides itself on its authenticity, traditions and friendly approach to visitors," she added. "Our beautiful country offers not only a warm welcome but also sea, mountains, desert, ancient culture and contemporary cosmopolitanism. We hope that you will take the opportunity to enjoy what the Sultanate has to offer during your stay and wish you all the best in the Al Mouj Muscat Marathon 2017."

All three races begin at the Al Mouj Marina at The Wave, and incorporate the entirety of the seaside community, including the seaside Kempinski Hotel, as well as the Al Mouj Golf Course. To ensure the runners' safety and wellbeing, a number of aid stations have been set up, offering them the opportunity to maintain optimum performance throughout the race. Situtated every five kilometres from the start of the race, these aid stations provide water and energy drinks, as well as bananas and oranges for those looking for an instant energy boost.

The race organisers have gone one better for those competing in the Marathon: two special needs stations have been organised. Located 13 km and 30 km from the race's start point, these stations are designed to provide the athletes with food and beverages for them to refuel during the course of this very taxing, very demanding race.

Winners of the races receive OMR500 as prize money, while those who come in second and third are awarded OMR300 and OMR200 respectively. The races are open to all above the age of 17, and competitors are then further split up into three separate categories based on their ages.

The 10k though, has been opened to competitors above the age of 10, and this particular race is subdivided into four categories. For more information on the Al Mouj Marathon, please visit muscatmarathon.om or follow the race on social media at Muscat Marathon.