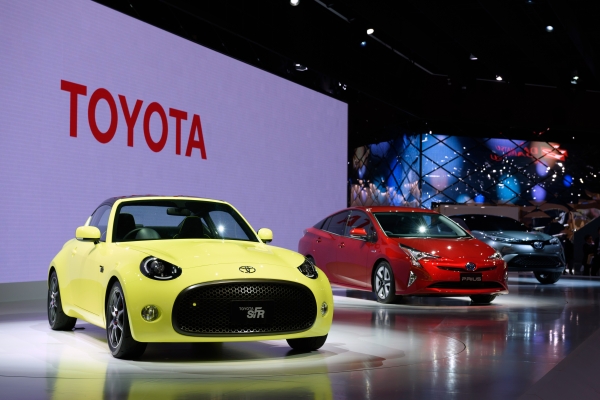 London: Auto-industry investment in the U.K. plunged by more than one-third in 2016 as carmakers concerned about Brexit deferred long-term commitments despite staying put for now.

Total investment pledges by automakers dropped to 1.6 billion pounds ($2 billion) in 2016 from 2.5 billion pounds in 2015, the Society of Motor Manufacturers and Traders said in a report Thursday. Despite the decline, the number of cars made in Britain rose to a 17-year high, driven by economic recovery across the European Union.

Carmakers such as Nissan Motor Co., Toyota Motor Corp. and Tata Motors Ltd.’s Jaguar Land Rover sell much of their U.K. production abroad, and the EU accounted for more than half of overall U.K. car exports in 2016. The auto lobby warned that failure to secure favorable trade arrangements with the bloc after Britain leaves could undermine Britain’s automaking revival.

"Significant investment in new plants and products over the past few years has driven this growth, not a post-Brexit bounce,” said Mike Hawes, chief executive officer of the society, in a statement. "We want trade deals but they must be the right deals, not rushed deals. Failure to do so could damage U.K. automotive manufacturing beyond repair.”

While Prime Minister Theresa May has said the U.K. will renounce its membership in the EU single market and customs union, she has indicated that she will seek special access for automakers. The government provided Nissan, which operates a plant in Sunderland, England, with a letter of assurances last October that it would seek to maintain tariff-free trading with the EU in the exit negotiations.

Leaving the single market and customs union could lift costs for British carmakers, should the EU and U.K. revert to World Trade Organization rules. They stipulate tariffs of 2.5 percent to 4.5 percent on parts and a 10 percent levy on complete vehicles that cross the border. The industry society says that could add 1.5 billion pounds in costs on cars sold in mainland Europe and an extra 2.5 billion pounds in costs for importers.

But there may also be opportunities should the country secure free-trade arrangements with non-EU countries. According to the manufacturers’ group, the number of U.K.-made cars sent to the U.S. grew by nearly half in 2016, accounting for 15 percent of all auto exports. Sales to Turkey, Japan and Canada also received a boost, while China lagged, growing by just 3 percent.

While industry investment fell last year, Britain’s largest car manufacturer reaffirmed its commitment to the U.K. Coventry, England-based Jaguar Land Rover reported Thursday that it made 544,401 cars at its three domestic plants in 2016, an 8 percent increase from 2015. Nissan and Toyota executives have also voiced support for their U.K. factories.

JLR could benefit from May’s newly unveiled industrial strategy, which pledged money for the development of electric cars. The company has said it wants to build such vehicles in the U.K. if the government makes infrastructure upgrades.

"Investment in new models, skills and advanced technology are critically important to ensure Britain has a thriving automotive industry -- even in the face of current uncertainty,” JLR global sales director Andy Goss said in a statement. We "are committed to ensuring manufacturing remains the backbone of the British economy.”