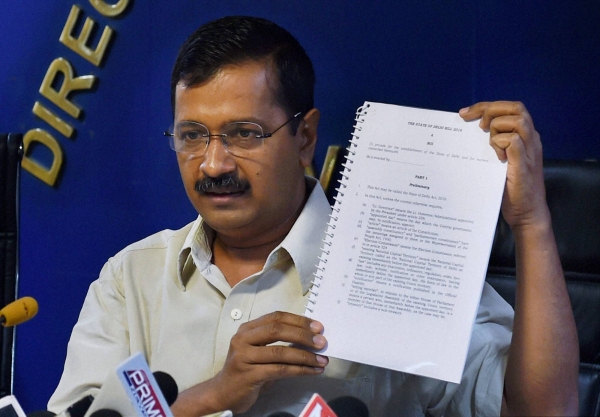 New Delhi: Chief Minister Arvind Kejriwal on Wednesday termed his government's works in health and education sectors in the last two years as "revolutionary" and suggested the Centre and states should adopt them as a "model of progress" for development of the country.
At a 'Republic Day' function at Chattarsal Stadium here, Kejriwal, who often attacks Prime Minister Narendra Modi in his public speeches, focused on AAP's "good governance" agenda during his 23-minute speech in what could be considered as a message to the voters in poll-bound Punjab and Goa where his party has high hopes. "When our government was formed in Delhi, we focused on education, health and brought revolution in these two sectors. In the first budget, we doubled education funds besides increasing health budget by one-and-a-half times.
"Some people criticise government for spending a lot of money on health and education, but I don't consider it as an expenditure, but as future investment," Kejriwal said while addressing the gathering. The Delhi Chief Minister said if people are educated and healthy, country will progress swiftly.
"I want to send a message on the occasion of Republic Day that if Centre and all state governments today vow to focus on education and health our country will make great strides.
"This is good that there are best private schools and hospitals. But, giving quality education and healthcare facilties is also the responsibility of any government," he said.
He also said the Delhi government is setting up 1,000 mohalla clinics and 122 poly clinics across the city to provide quality health facilities to the people in the national capital.
Kejriwal, however, said there are several things "we are yet to do and I am very sure we will go long way and succeed with the blessing of people". Without mentioning BJP and Congress, he said the people of Delhi had uprooted "established" political parties two years back and given mandate to a new party (AAP) of the common man and "I congratulated Delhiites" for that.
Lauding his deputy Manish Sisodia for works in education sector, the Delhi CM said the government has constructed around 10,000 rooms to decongest classrooms and also sent teachers and principals of government schools to IIM and abroad for better training.
He claimed the facilities the Delhi government is providing in its schools are not available in schools across the globe. He also said the Delhi government did not allow private schools to increase fee and let education turn into a business.