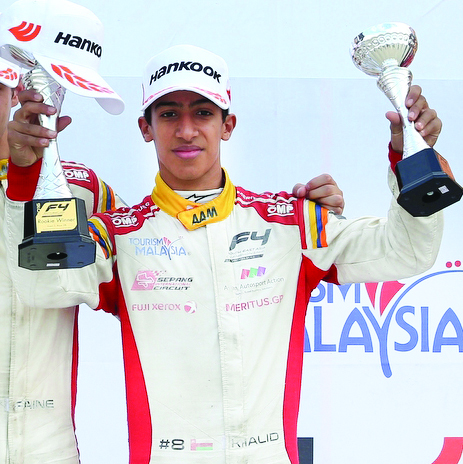 Muscat: Oman’s young racing star Khalid Al Wahaibi bagged two awards as the inaugural season of the Formula 4 South East Asia (F4/SEA) Championhip concluded with the Meritus Awards Gala at the Sepang International Circuit in Malaysia on Sunday.
Khalid Al Wahaibi bagged both the National Rising Star of Oman award as well as F4/SEA Rookie third place award.
According to the organisers, after a closely-fought season, the overall champion was awarded to Indonesia’s Presley Martono (565 points) who pipped New Zealand’s Faine Kahia (563 points) by just two points for the top honours.
Rounding off the top three was India’s Akash Gowda (457 points).
The organisers said the three racing stars will get a GP2 test drive each, with Kahia also getting a works Lamborghini GT3 test, while the champion will also receive significant funding.
The young Indonesian rookie Martono also claimed the overall Rookie title after a stellar season that saw the teenager rack up a total of 717 points. In the runners-up position was Malaysian youngster and formula-racing debutant Isyraf Danish who finished the season with 486 points. His results came on the back of a stellar result of six podium finishes from the six races contested at the weekend, including a maiden race victory.
In third place in the F4/SEA rookie standings was Oman’s Khalid Al Wahaibi who completed his engagements with 434 points.
The inaugural Meritus Awards Gala also saw awards handed out in the National Rising Star categories for the nations represented in the first F4/SEA season. These included awards to Singapore’s Danial Frost, Oman’s Al Wahaibi, New Zealand’s Kahia, Martono for Indonesia, Gowda for India and Isyraf Danish as Malaysia’s rising star.
In celebrating the future of motorsports, the event champions from each of the six events were also given a mention. These included Frost who became the first ever F4/SEA Star Driver at the opening event in August, Gowda following his impressive performance at Event 2 at the Clark International Speedway in the Philippines, Martono for dominating Event 3 on home soil at the Sentul International Circuit, Australia’s Jordan Love at Event 4 in Sepang, Kahia after a superb run at the Buriram International Circuit for Event 5 and Isyraf Danish as the season finale Event 6 Star Driver.
In recognising the spirit of young motor racing talents, awards were also handed out to Malaysia’s Jazeman Jaafar for his outstanding achievement in motorsports by an ASEAN driver and and Indonesia’s Rio Haryanto as the ASEAN Driver of the Year following his extraordinary achievements that included being Indonesia’s first ever Formula One driver.
In recognising the extraordinary, exceptional and continuous contribution to Malaysian and regional motorsports, the Meritus Awards Gala also presented the Lifetime Achievement Award to Yang Mulia Tunku Datuk Mudzaffar Tunku Mustapha, chairman of the Automobile Association of Malaysia (AAM) and the only Malaysian to sit on the world senate at the FIA.
Peter Thompson, Chairman of Asian Autosport Action Group, said: “It has been an amazing first season of the Formula 4 South East Asia Championship. In the time that we took to build this from the ground up together with the AAM as the lead FIA-affiliate for the region, to close out the season with the Meritus Awards Gala has truly surpassed our wildest imaginations. After a truly intense 36-race, 6-event first season, I am very proud of what these young drivers have all achieved.
“They have grown and developed into an exceptional group of young talents, one that I hope others can also see and recognise. Congratulations to Presley Martono for taking the overall and Rookie titles, Faine Kahia and Akash Gowda as our overall top 3, also to Isyraf and Khalid Al Wahaibi as the second and third placed overall rookies!”