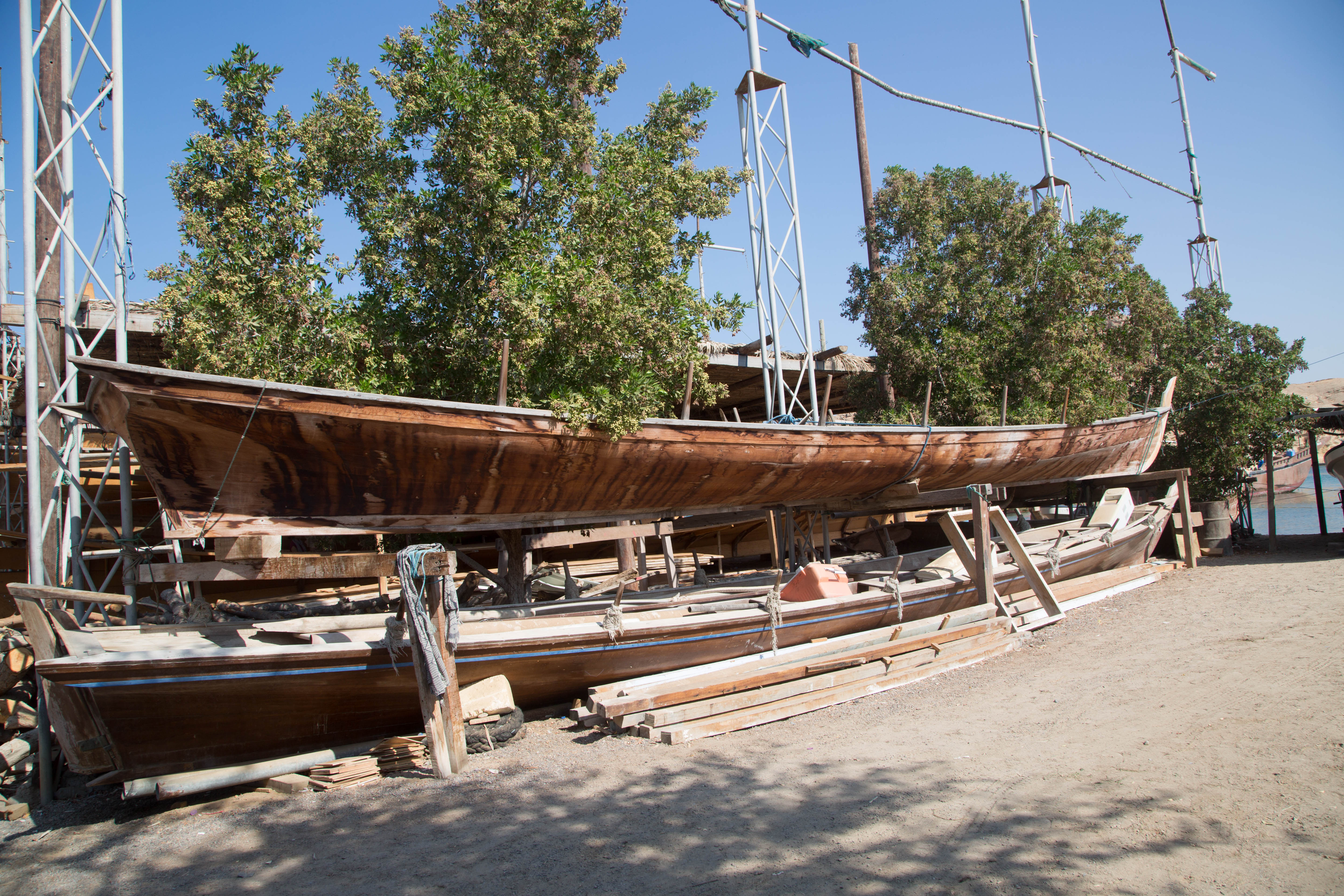 As we drove from Muscat to the coastal city of Sur, it felt like we were on a treasure hunt. En route, we spotted a mysterious signboard marking the route to the Ancient City of Qalhat another denoting Hawaiyat Najm park, Arabic for “Falling Star”, the name, and folkloric explanation for the mysterious azure sinkhole in Bimmah. While the drive itself was enjoyable because of the gorgeous coastal views, it was our destination that my mind was focused on.

Starting with the ancient residential dwellings and well-worn streets, Sur proudly maintains its centuries’ old heritage, not only in looks, but in many of the industrial activities that still function much the way they used to, from fishing to the main draw of our journey, dhow making.

Given its strategic geographic location at the intersection of the Arabian Sea and the Sea of Oman, Sur has long been an epicentre of seafaring activities, not only in terms of trade and fishery, but in the manufacturing of the main mode of oceanic transportion in ancient times. The distinctive brown wooden dhows, unique in their design and structure, were central to Oman’s historic rise to the top of the sea trade industry.

Used by fishermen as well as traders to export local goods such as copper from Sohar, Frankiscense from Dhofar, and light wood from Jabal Akhdar to trade for foreign goods in China, India, Africa, and other countries, these ships are as much a symbol of the country as the iconic khanjar. Old Arabian tales of Sur and its dhows abound, most notably, the stories of Sindbad, presumably a Sur native, whose nautical adventures took place onboard a Suri dhow.

Just past the Sur corniche, in the shadow of the Khor Al Batah Suspension Bridge, an engineering marvel that has been compared to the iconic Boston bridge, sits the dhow factory. The juxtaposition of the modern masterpiece with the ancient workshop, is an apt symbol of the city itself.

We parked and walked towards the sound of hammers thumping and drills whirling, the air growing thick with the aroma of fresh cut wood mingling with the salty ocean breeze.

Through the rusted doors, a few colossal ships in the final stages of construction towered over the woodcutting area, nearly blocking the view of the finished dhows bobbing in the harbour beyond. I stepped carefully over the wood scraps and big, uncut logs to get a better look. An old carpenters was intently applying his skills, chiselling and smoothing the sides of the dhow and etching in elaborate decorative carvings. I began chatting with him, and learned that he had come from India to work in the factory over a decade ago, but was still considered new by many of the workers who had been practising this craft for over 45 years.

This speaks to the fact that dhows are unlike modern ships, beginning with their construction, which is all done by hand, even now, in an era when machines and robots have replaced human labour in almost every other industrial sector. The only electrical equipment used at the dhow factory is the drill, with the wooden beams cut and manipulated by the skilled craftsmen. The process is a laborious one, but both the owners and the workers feel that a skilled carpenter’s sweat and passion are essential to their craft.

Dhows vary in design and size, though most are built using teak wood imported from India and Malaysia along with locally grown cedar and timber, which are used to make the skeleton and interiors. Each design is unique, as they always have been.

What has changed over the centuries, are the uses of these wooden-hulled Arabian boats. Nowadays, local fishermen can’t afford the hand-crafted ships, and there are many faster ways to import and export goods, so the dhows that are being built now are predominantly ordered by private collectors or for the purpose of tourism and cultural preservation.

The 68ft dhow I was watching them work on was being made for the FIFA World Cup in Qatar. It was destined to become a floating dhow restaurant to give the many expected tourists an authentic Arabian experience. From commercial orders like that, to orders from private citizens, this factory is the only place in the world that can supply authentic dhows, as it is the last such factory in the Middle East to have survived the test of time.

The museum inside the dhow factory has replicas of some of the famous dhows of the past, with specifications and tales of their exploits, and the owners of the factory maintain an open-door policy, welcoming visitors to come and see their work anytime.

More than just business owners and carpenters, theirs is an honourable calling. These men faithfully maintain the historic industry upon which their country was built, and in doing so, have become the protectors of Sur’s rich and storied past. A great treasure indeed. —[email protected]